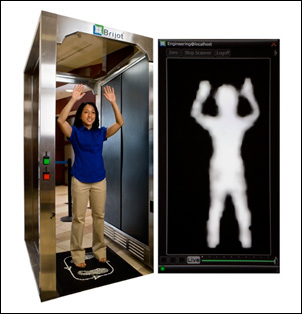 That’s the question asked of White House science adviser John Holdren by five researchers at UC San Francisco and one at Arizona State University in a letter titled, There is Still no Rigorous Hard Data for the Safety of X-Ray Airport Passenger Scanners. From ProPublica:

There are two types of body scanners. Millimeter wave machines emit a radio frequency similar to cellphones. Backscatters work like a fast-moving X-ray. In the latter, the rays bounce off the skin and create a fuzzy white image of the passenger’s body. Because the beam doesn’t go through the body, most of its radiation is received by the skin. The TSA says the backscatter technology has been evaluated by the Food and Drug Administration, the National Institute for Standards and Technology and the Johns Hopkins University Applied Physics Laboratory. Survey teams are using radiation-detecting dosimeters to check the machines at airports. The TSA says the results have all confirmed that the scanners don’t pose a significant risk to public health.

In another letter to Holdren last year, the same group argued that though the overall dose may be low, no one had yet quantified the dose to the skin. Officials from the FDA and TSA responded by releasing a study last last estimating that though the dose to the skin was twice the dose to the body it was still extremely low. But in their latest letter, the UCSF et al researchers note that Johns Hopkins didn’t test an actual airport machine but a model built by the manufacturer configured to resemble a system previously tested by the TSA. Worse, according to ProPublica:

The researchers’ names have been kept secret, and the report on the tests is so “heavily redacted” that “there is no way to repeat any of these measurements.”  The physics and medical professors also took issue with the device used to measure the radiation. Although the device, known as an ion chamber, is commonly used to test medical equipment, they argue that the detector gets overwhelmed by the amount of radiation the backscatter deposits in a short time and might not provide accurate readings.

Here are a few excerpts from the latest letter to Holdren, by John Sedat, professor emeritus in biochemistry and biophysics at UCSF, et al: 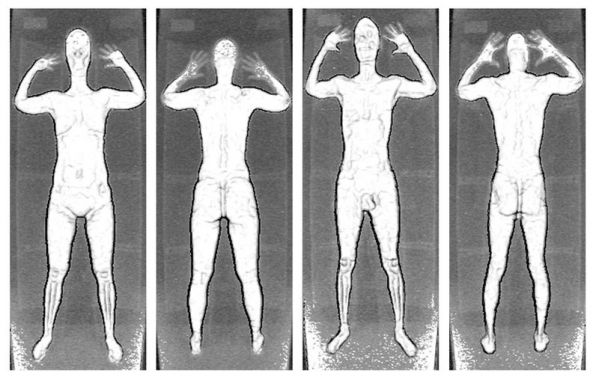 If you’ve been following the amazing series of New York Times articles reporting over the past few months on lethal mistakes in the software and other problems associated with X-ray imaging and therapy machines, then you’ll know something of what that last bullet point refers to.

Here are a few more excerpts from the letter, including the meaning of patent changes and the difference in testing standards between airport scanners and other technologies requiring extensive safety vetting:

Finally, there is the issue of the recently disclosed patent… filed two years ago. This patent covers operation of a two-sided system in which each side has a source and a detector, and includes the ability to record a ‘shadow’ image generated by transmission from one side, being received on the other side, implying significant X-ray transmission capability (in addition to the backscatter mode) as well as the ability to compare stored images, which was claimed previously but was not done. What does the new capability mean for the configuration and modalities for those X-ray airport scanners already installed?  Are the intensities of the beam now changed?  How can one be confident that the scanners are in a known configuration, not continually changed (changing) with different X-ray doses?

In summary, the independent testing of the safety of these specific scanners has not been rigorous nor has it been held to the standards usually associated with new devices before approval for utilization in the public sector.  Usually the exact technology, as installed, is sent to a university, national laboratory or other outside facility that has the expertise to test, for an extended period of time to enable an in-depth study—usually by several independent groups. Different test equipment, optimal for this configuration, can be used at a site that specializes in the potential problems of this technology.  The hardware and software is tested in all aspects, finally arriving at a place where the true capabilities of this system are totally known, similar to testing of new aircraft, spacecraft and other technology that impacts on a national level.

The authors conclude by suggesting a rethink of the notion that damaging ionizing radiation is the best way to search for damaging weapons.

Finally, to end on a positive note, there are alternatives, that do not use ionizing radiation and that not only accomplish the same goal but also would be more effective. For example, scattering of high frequency electromagnetic waves, which are not ionizing radiation, is much more sensitive to differences between human tissue and high explosives.  As another example, it is now possible to use a hand-held nanotechnology-based device that detects many/most high explosives with a sensitivity significantly surpassing a sniffer dog, the “Gold Standard”…. Rather than deploy systems that have the serious unknowns and potential shortcomings described above, why not use the great resources of our National Laboratories and our world-renowned entrepreneurial spirit to develop appropriate technologies that will reliably detect explosives and weapons that do not rely on invasive imaging?

I’ll take the pat-down, thank you.