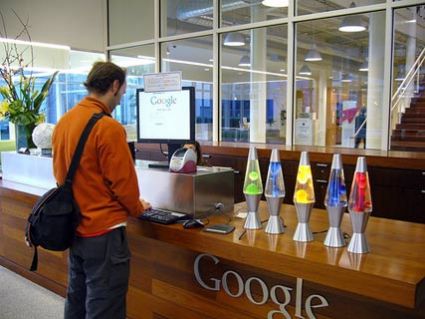 Searching for Food
Around campus, they call it the “Google 15.” That’s how many pounds newbies allegedly put on from all those free chef-prepared meals, drinks, and snacks. In 2008, one blogger whipped out a napkin and estimated that Google spent some $72 million a year on worker grub. And if Larry’s minions should get a bad oyster, no biggie—they can simply book a free appointment with one of the Googleplex physicians.

How Much is that Doggie in the Windows?
Microsoft’s West Campus has its own mall, with stores, banking, 14 restaurants, a pub, and a soccer field. “The Commons has a lot of features to help people get things done,” a company real-estate manager told the Seattle Times, “whether that’s banking or eating or shopping or taking care of their cellphone connectivity, getting exercise, connecting with people socially—without having to get off campus.”

Location-Based Loyalty
Powerset, a startup Microsoft purchased in 2008 for $100 million-plus, tried paying employees extra to live within a mile of work, and got “way more value each month than the $1,500 per person we paid,” raves founder Steve Newcomb in a widely read blog post entitled “Cult Creation.” People worked longer hours “because they knew they could always just run home.”

Running in Place
Employees at Pixar Animation Studios in Emeryville, California—whose perimeter fence is guarded by sinister-looking roses right out of Sleeping Beauty—can walk or jog on the compound path, swim laps in the outdoor pool, or work out at the on-site gym (with exercise classes!), b-ball and v-ball courts, and soccer field. Just ask the interns, who get free housing close by.

Ticket to Ride
Qwiki, a San Francisco startup, “reimburses all of our exceptional team members for transportation to the office. Commuting by train? You can expense the tickets. Coming by bike? We’ll buy you one. Driving a car? We’ll cover your gas.” Sweaty from that bike ride? They’ll do your laundry, too.

We’ll Handle The Rest
Zynga, the creator of Farmville, offers no set vacation. “Our vacation policy is ‘please rest and take some days off,'” its website notes. (Update, 6/3/2013: the revised website simply cites an “open vacation policy.”) No saying whether Zyngans take more vacation—or less—as a result. Zynga’s HR folks never got back to me. But an anonymous poster on the Q&A website Quora notes that they work “extremely long hours.”

Best Friends Forever
Amazon, Zynga, and Google are just a few of the tech companies that let you bring your canine companion to work. Have to assume no cats, though. After all, these firms are trying to reward loyalty.

Cleaning Is Sooo 2010
Every two weeks, the IT consulting firm Akraya dispatches professional house cleaners to its employees’ homes. “Akrayans,” its website explains, “work as a team, party as a team, and grow as a team.”

Babies on Board
At biz-software maker SAS, parents can get subsidized on-site child care for $410 per month—about $2.50 an hour if you’re working 40-hour weeks (which you probably aren’t). The firm also offers summer camps onsite at its Cary, N.C. headquarters.

We Saw Avatar First!
From the website: Because gaming giant EA “partners with some of the biggest names in the entertainment business,” employees “score access to special events, such as private screenings of blockbuster movies prior to general public viewing.”