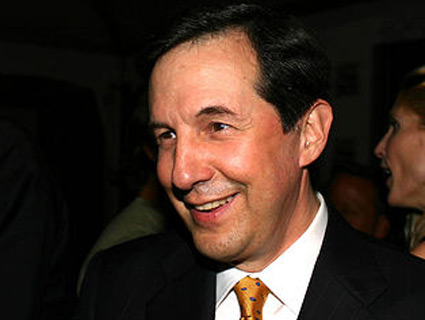 News flash: Fox News is not fair and balanced. According to whom? The cable network’s star Sunday host, Chris Wallace.

Clips of the on-air duel between Wallace and Comedy Central’s Jon Stewart on Fox News Sunday have been lighting up the Intertubes. In an interview, the Fox anchor repeatedly tried to out-wit the faux anchor and portray him as an ideologue pushing a liberal partisan agenda. But Stewart explained—over and over—that he’s a comedian. He noted that his overall agenda is “about absurdity and corruption… It’s anti-contrivance.” And he rejected Wallace’s attempt to portray the rest of the mainstream media as a bunch of covert liberal schemers. The MSM’s true bias, Stewart insisted, is “toward sensationalism, conflict, and laziness.”

Stewart outplayed Wallace throughout the 24-minute-long segment, which has caused much chuckling online. But one interesting exchange has not received much attention: Wallace’s admission that Fox is not objective.

Since Roger Ailes birthed Fox News, its motto has been “Fair and Balanced.” Wallace even pointed out to Stewart that the coffee mug in front of him had this slogan emblazoned on its inside. (Stewart joked that the water in the mug might be laced with typhoid.) Yet when Stewart challenged Wallace, the Fox anchor conceded, not purposefully, that the network doesn’t truly aim for fair-and-balanced coverage. After Stewart asked Wallace if he believes that Fox News is as ideologically neutral as most of the mainstream media, Wallace replied, “We’re the counterweight. They have a liberal agenda, and we tell the other side of the story.”

The other side of the story. Fairness and balance would seem to imply telling all sides of a story, not merely one side. Yet Wallace was acknowledging that Fox News’ mission is to push a conservative agenda in order to right the media universe. This wasn’t a slip-up. Minutes later, while referring to Fox News viewers, Wallace repeated this point: “They’re getting [with Fox News] somebody who tells the other side of the story.”

There’s nothing wrong with a media institution adopting an overall ideological stance. There’s a grand tradition in American journalism of liberal and conservative outlets (of which Mother Jones is proud to be a part). But Fox News has always tried to have it both ways: function as a conservative organization but claim it is not (at least when it comes to its news reporting, as opposed to its right-wing-to-the-core Beck-O’Reilly-and-Hannity line-up). This ruse has not been much of a secret. But in trying to defend Fox News, Wallace disclosed that its fair-and-balanced schtick is bunk. Telling the conservative side of the story may well be a legitimate endeavor. It isn’t a balanced one.