Travelling to the farthest corners of the world, it is not just the remarkable environments that can prove a little hard to capture.

When producer/director Mark Flowers met the children from the North-East Indian root tree villages, he hadn’t bargained on having to make himself the center of attention. But sometimes it’s the little extras that make an experience unforgettable. 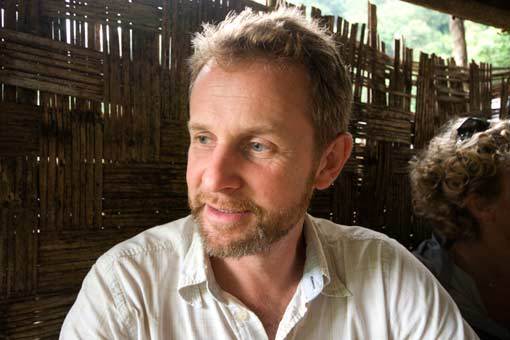 The most heart-stealing and downright soul-enhancing benefit of working on a Human Planet shoot is the children we encounter while we are filming. It’s unbelievably refreshing to step outside of a regulated, fast-paced and impersonal modern, urban society and meet people who live in a more open, communal and for me personally, a far more “Human” way.

The children we met during our trip to film living root bridges in one of the most remote areas of North-East India were fantastic—cheeky, smart, and funny.

To the young people who live in isolated hill villages in the rainforests of Meghalaya, the arrival of a gangly bunch of giant, pale-skinned strangers, brandishing weird black boxes, screens and cables, was the most surprising thing to happen in a long while. The circus had come to town!

Within minutes of us stepping out of the cars, there were bright eyes at the windows and small hands waving from the homes we passed. High pitched “hellos” echoed all around while tiny toddlers stood dumb struck for a few seconds in doorways and then exploded into howls. Dogs barked and sulky, caged cuckoos crooned from dark corners.

Whenever we set up to film very quickly we were surrounded in a small lava flow of children, far to shy to talk to us individually, but en masse, well that’s different, isn’t it? Whenever we got the camera out we were mobbed! 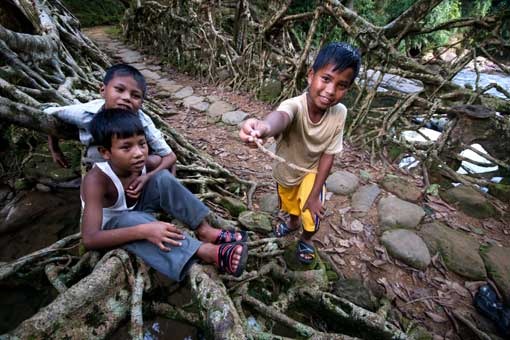 The funny thing was that we were hoping to shoot short stories for our sister production, working title “Little Human Planet”, showing how children live in different parts of the world. This depended on the little people we were hoping to film behaving as if the camera wasn’t there: Fat-chance!

We soon realized that if we were to get any shots that looked even vaguely natural, the crowd of children needed to be distracted, and that meant entertaining them. Guess who had to do the entertaining: Me. Yikes!

Just so you know, I am a greying man in early middle age. I am not a totally serious person but as a director on location I have a role to play out, a reputation to maintain. I have to be seen to be in charge! Usually you’d find me in earnest conversation with the team, or looking sternly down my monitor checking that each shot is right. 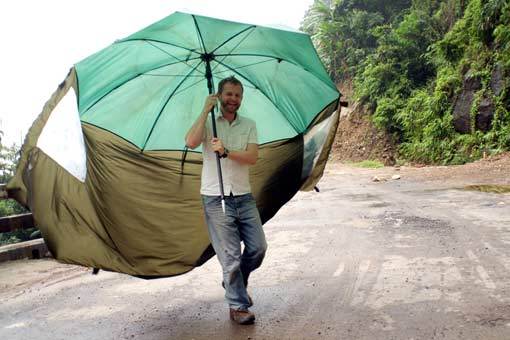 I didn’t have a white rabbit, I don’t know any tricks, so the only thing I could think of to do instantly was to sing! it was raining too, I had an umbrella—so I started with “I’m singing in the rain” but soon moved on to nursery rhymes to keep the “show” on the road.

I am not sure if the footage of the crowd and the children will end up being used as everyone looks very surprised or is laughing, but the most magical thing is that the little children joined in with me. Incredibly in such a remote part of the world they knew “Baa Baa Black Sheep” and “Twinkle Twinkle Little Star!” The memory of singing in the rain with little children holding Technicolor parasols is a memory I will always cherish.