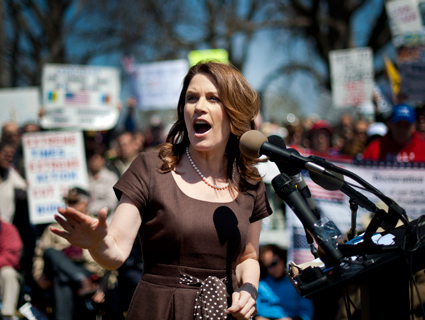 Almost immediately after President Obama’s recent Middle East address, in which he reaffirmed his administration’s commitment to a two-state solution in Israel, Rep. Michele Bachmann (R–Minn.) sprang into action. Blasting the president’s “shocking display of betrayal towards our ally,” the tea party icon attacked the speech (which did not actually represent a policy shift) in robocalls and online ads that appeared the key primary states of Iowa, South Carolina, and New Hampshire.

Bachmann’s support for Israel isn’t simply an embrace of an ally in a historically volatile region; it’s rooted in biblical prophecy. As Bachmann explained in a 2010 speech, she believes that if the United States turns its back on Israel, “a curse” will be placed on the land. As proof, she cited Genesis 12:3, in which God says to Abraham, “The one who curses you I will curse.” It was an uncommonly explicit blurring of policy and theology from a prominent politician—but for Bachmann, who’s expected to formally enter the presidential race in the coming weeks, it was hardly an isolated incident.

Over the last decade, Bachmann has enjoyed an on-again off-again relationship with Olive Tree Ministries, an evangelical Christian organization dedicated to “interpreting current events from a Biblical perspective.” Bachmann has appeared on Understanding the Times, the radio program hosted by Olive Tree’s founder Jan Markell, at least half a dozen times, discussing topics like gay marriage, the war on terror, and biblical prophecy. As she told Markell in 2004, “We’re seeing the fulfillment of the Book of Judges here in our own time, where every man is doing that which is right in his own eyes—in other words, anarchy.”

“We’re seeing the fulfillment of the Book of Judges here in our own time,” Bachmann said, “where every man is doing that which is right in his own eyes—in other words, anarchy.”

In an appearance on the show in 2009, Bachmann railed against a Department of Homeland Security report on right-wing extremism, originally commissioned by the Bush administration, in part because she felt it singled out individuals who embrace end-times prophecies—that is, the idea that major events like natural disasters, wars, and international alliances are harbingers of the apocalypse, as foretold by the biblical Book of Revelation. Although subject to a range of often conflicting interpretations, many evangelical Christians believe that in the last days, the Earth will fall under the control of the Antichrist, a messiah-like figure who will rule the world before the second coming of Christ.

However, despite Bachmann’s fears, the DHS report (PDF) didn’t really say what she said it did. The report specifically cautions against the embrace of such theories by groups that believe in Christian Identity, a militant white supremacist ideology with no connection to mainstream Christian teachings. Those warnings were validated in 2010, when federal agents arrested nine members of the Michigan-based Hutaree militia, a “Christian patriot” network that intended to combat the Antichrist by killing police officers.

Markell’s show is just a small part of her Olive Tree Ministries, which she founded in 1982. The organization’s site covers everything from Harry Potter (a gateway to the “occult“) to the Girl Scouts’ moral vacancy (because of its associations with Planned Parenthood) to the New World Order. The commander-in-chief is an unpopular figure on the site, if not exactly end-times-worthy; he’s not competent or popular enough to be the Antichrist, Markell cautions, but “Obama’s efforts are a run-up to it.” One story promoted by Markell’s group warns that the president intends to declare himself “World President.”

But the largest issue for Markell, who got her start in ministry as a member of Jews for Jesus, is Israel. The Olive Tree logo features a Star of David overlaid with a dove. A promotional video splashed on the site’s main page links a national identification system, international climate change accords, the global financial crisis, and the continuing conflict in Israel to the end times. As Gary Kah, author of the apocalyptic tract En Route to Global Occupation and a speaker at Olive Tree’s 2010 conference, warns, we’re “living in the last of the last days.” A two-state peace plan, he says, “will give rise to the Antichrist.”

When Minneapolis’ City Pages first reported on Bachmann’s relationship with Markell in 2005, the then-state senator denied any knowledge of Olive Tree Ministries. However, Markell tells Mother Jones that she’s known Bachmann off and on for 35 years, and says she spoke about Israel at Bachmann’s church in the late 1970s. “My hunch is that they misquoted her,” Markell says. “She’s been at my conference. Why she would have said [otherwise], I don’t know.”

Indeed, Bachmann has attended at least one of Olive Tree’s annual “Understanding the Times” conferences in the Minneapolis suburb of Eden Prairie. “Thank you for the wonderful conference April 25-26,” she wrote in a 2003 testimonial on the organization’s website. “Both Chuck Missler and Bill Koenig were terrific. May God bless you, and may He bless Israel.”

Missler runs a Israel-centric evangelical ministry and became a minor Internet sensation four years ago when he released a video arguing that, if evolution were real, jars of peanut butter would occasionally come to life. Koenig, publisher of an influential Christian news service and a regular at Understanding the Times, has coauthored a book, Israel: The Blessing or the Curse (a reference to Genesis 12:3), which argues that there is a cause-and-effect relationship between America’s policies in the Middle East and natural disasters at home.

Missler became a minor Internet sensation four years ago when he released a video arguing that, if evolution were real, jars of peanut butter would occasionally come to life.

Bachmann’s appearances and statements suggest a more than passing familiarity with the ministry. She once dropped by the studio unannounced to interrupt Markell’s interview with Gordon Klingenschmitt, a former Navy chaplain who was court-martialed for protesting the service’s ban on sectarian prayer. (He was not disciplined, however, for performing an exorcism on a lesbian service member who sought counseling after being raped.)

“I love listening to your show on Saturday mornings,” Bachmann told Markell during another appearance in 2009. She then launched into a lengthy argument against “One World” currency. At a recent hearing, Bachmann had pressed Federal Reserve Chairman Ben Bernanke and Treasury Secretary Tim Geithner for assurances that they would not replace the dollar with any foreign or global currency—the Chinese yuan, for instance. Markell told viewers that such a monetary system had been identified as a tool of the Antichrist.

Markell says she is reluctant to speak about her relationship with Bachmann in much detail without consulting with the congresswoman. “I don’t know if I influenced her,” she says. “My hunch is that this ministry probably did, but I don’t know that for sure.” Markell says she would “absolutely” support Bachmann if the congresswoman enters the presidential race: “I think Michele is one of the most gifted orators I have ever heard, when it comes to interpreting the problems that surround America and the world. She has my perspective.” Bachmann did not respond to a request for comment.

Her association with Olive Tree Ministries isn’t the only hint that Bachmann’s politics are guided by prophecy. For years, she’s cited Concerned Women for America founder Beverly LaHaye as one of her greatest political influences. LaHaye is the wife of Tim LaHaye, co-creator of the Left Behind Series, the influential end-times epic about life after the Rapture. Last year, the LaHayes appeared on Mike Huckabee’s Fox News program to explain how President Obama’s policies were expediting the apocalypse under the guise of “globalism.” (Tim LaHaye has clarified that Obama is probably not the Antichrist because “there is no indication in the Bible that the Antichrist will be an American.”)

According to Shalom Goldman, a professor of Middle East studies at Emory University who specializes in Christian zionism, Bachmann’s views on Israel and Biblical prophecy are hardly unique among evangelical Christians. “A lot of the talk of Christian zionism is wrapped up with end times talk,” he explains. “That is, we’re coming to the millennium and that Jews have to get back to the Holy Land. That’s dispensationalism, or millennialism, and it’s divided in periods. We are now living in the last dispensation. That’s the ideology of Left Behind.”

Bachmann’s prophecy-driven politics extends to education, as well. As a conservative activist in the early 2000s, she was a member of the Minnesota-based Maple River Education Coalition, a small network dedicated to defeating state and national curriculum standards. As one newsletter published by the group explained, “[I]n the core curriculum now required by federal law, there is one unifying theme, which is the disbanding of the United States of America as a sovereign, free people, and the creation of an international one-world government.” Another group member told Minnesota Public Radio that the proposed curriculum standards were consistent with his understanding of the end times. How far-out was Maple River? Then-Gov. Jesse Ventura, who went on to host a TV show about conspiracy theories, publicly mocked the group as too conspiratorial, saying its members “think UFOs are landing next month.”

Sometime in June, Bachmann is expected to travel to Iowa to declare her presidential intentions. As a member of the House who’s largely dismissed by her party’s elite, Bachmann faces an uphill struggle. But if her campaign seems at all quixotic, her millennial views provide some important context. Bachmann’s rhetoric stems from a devout and unshakeable worldview—combating globalism and multinational diplomacy aren’t simply planks in her platform; they represent mankind’s last best chance at staving off impending doom.