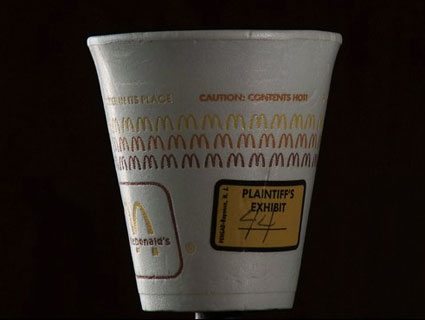 Tonight I am going to be on HBO, in a new documentary film called Hot Coffee. It’s not a place I ever expected to be. Even now, I’m not quite sure how I got there. But it started something like this:

The book really should have been called The Myth of the Frivolous Lawsuit, because much of it was devoted to debunking some of the stories PR firms, funded largely by the tobacco industry, had been spreading for years to persuade Americans that the nation’s courts were flooded with frivolous lawsuits and that therefore they should support efforts to immunize big companies and doctors from liability. Exhibit A was the grossly distorted story of Stella Liebeck, the elderly New Mexico woman who won millions suing McDonalds for a hot coffee burn and who has become a running gag line about litigious Americans.

Restrictions on lawsuits are something people don’t care about until they get hurt and want to sue someone and then discover that they can’t. When the book came out in late 2006, I spent some time traveling around to various lawyers’ conferences trying to sell a few books—preaching to the choir, basically.

But even the trial lawyers, who really care about this stuff, didn’t buy many books. But in January 2009, I got an email from Susan Saladoff, a medical malpractice attorney from Oregon whom I’d met at an event for public interest lawyers where I’d done a book talk. She said she wanted to make a film about the subjects in my book.

Susan wasn’t the first person to cold-call me about making a documentary out of my book. With cheap filmmaking technology so easily available today, we’re all documentarians now. Several other aspiring filmmakers had called me not long after my book came out. I declined to get involved with any of them. After all, if no one wanted to read a book about tort reform, why would they watch a movie about it? None of those other films ever seemed to materialize.

So when Susan called, I was skeptical. I said I’d help but couldn’t really devote another two years of my life to a money-losing tort reform project that was likely to end up as a YouTube video on the trial lawyers association website. I had two small children and a full time job. My husband would have strangled me.

I forgot about it. But then I started getting emails and calls from Susan and some people who work for her, asking for research help. When I read an early treatment for the film, which initially had the horrible title “DisTorted,” it only confirmed my belief that while this was a well-meaning project, it wasn’t going anywhere. One day Susan came to DC to interview me for the film. I was so nonchalant about the prospects of the project that I failed to put on a lick of makeup (a decision that I have come to rue.)

Periodically, Susan would invite me to a screening on the West Coast. I could never go. She seemed to have gotten financing and was plowing ahead. In the fall last year, she called to invite me to a rough cut screening of the whole film at the offices of Public Citizen, the consumer advocacy group founded by Ralph Nader that has been on the forefront of tort reform battles for decades. So I went.

As the film started rolling, I realized that this was no YouTube video. The production was slick, the story well-told and riveting. Susan had succeeded where I had failed by getting the family of Stella Liebeck to participate in the production. They told the story of how Stella had been horribly wronged by McDonalds, and Susan included the trial exhibits from the McDonald’s case that show exactly why the jury decided the way it did in awarding her $2.7 million in punitive damages. They definitely corrected the record on a case that has become an urban legend in the US.

The movie is even funny, which is a real accomplishment when you’re talking about tort reform. There’s hilarious footage of President George W. Bush, who made tort reform his signature issue, addressing a doctors’ group and lamenting that because of frivolous lawsuits, ob/gyns were unable to “practice their love with women.” Susan made good use of the fact that most Americans have no idea what a tort is, using man on the street interviews to show how badly the civil justice system is misunderstood. She even managed to get John Grisham to do a cameo.

Watching the film, I realized I had totally underestimated Susan. I should have known better. She was a successful plaintiffs’ attorney who’d been trying cases for more than 20 years. That alone should have told me something, because there are very few women plaintiffs attorneys. It’s a rough business, and one only practiced by people who have a big appetite for risk. Just watch A Civil Action and you’ll see.

To be a really good trial lawyer, you have to have several critical qualities: fearlessness, a deep commitment to fighting injustice, an ability to focus on the minutiae of obscure subjects while at the same time being able to spin it all into a really good yarn that even the least educated juror can understand. Susan had all of those things, and as it turns out, those qualities also seem to include some of the basic criteria for making a successful documentary.

Around Thanksgiving last year, I started getting cryptic emails from people: Have you talked to Susan? When I did get in touch with her, she dropped the bomb that Hot Coffee had been accepted into the Sundance Film Festival, the dream of every aspiring filmmaker. This time, though, I wasn’t quite so surprised. I had realized back in the fall when I saw the rough cut of Hot Coffee that Susan was a force of nature. She’d given up her law practice, taken out a second mortgage on her house, and single-mindedly pursued her passion with the same laser-like focus she gave her malpractice clients. Perhaps most importantly, she had the smarts to hire the right people, like Cindy Lee, a film editor who had previous worked on a documentary that had been nominated for an Academy award. Hot Coffee was always the kind of movie that would live or die on the editing, and it’s clear that Cindy’s contribution is enormous.

At the Sundance premiere, Susan gathered together many of the people who’d been in the film. Being there with them was a moving experience. After nearly 20 years of watching their mother become the butt of late night talk show jokes and a national cultural symbol for all that was supposedly wrong with the legal system, Stella Liebeck’s family was finally very publicly vindicated. They could not have been happier.

The Gourley family also came for the premiere, driving their family Suburban all the way from Nebraska in the dead of winter to be there. The Gourley’s son Colin suffered brain damage at birth due to the negligence of Lisa Gorley’s OB. I wrote about the Gourleys in my book because they won a large jury award in Nebraska that challenged the state’s cap on medical malpractice damages—the same sort of cap that George Bush had tried to force on the whole country. They lost their appeal, and as a result, the jury award was greatly reduced by the Nebraska Supreme Court to an amount that didn’t come anywhere near covering the expenses they’d incurred caring for Colin. They had had a really tough go of things trying not to go bankrupt while caring for their son, who has been in and out of hospitals since he was born and is severely disabled. Susan made 16-year-old Colin Gourley a star, and he has since gotten to travel the country this summer thanks to her film.

Since Sundance, the film has been in a host of other prestigious film festivals, and Colin has happily been there to see it. Last week, it premiered in New York, and then in DC, where I caught it again, in a real theater, with opening remarks by Sen. Al Franken and a tribute to Colin and his family. Tonight, Hot Coffee debuts on HBO at 9 p.m. EST, and will air 11 times over the summer. HBO expects the audience for the film to be about 2 million. Wow.