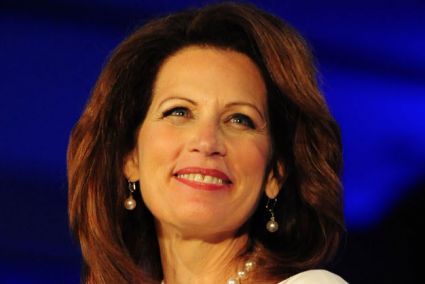 WATERLOO, IOWA—Michele Bachmann is not a flake.

One day after being grilled by Fox News’ Chris Wallace about whether she was really a serious presidential candidate, the Minnesota congresswoman formally kicked off her 2012 campaign for the GOP nomination in Waterloo Monday morning with a fiery address that should put to rest the idea that she is anything less than a bona fide contender. She also once again signaled there is a new Bachmann, one who no longer harps on divisive social issues—at least not in public.

Speaking in front of a restored mansion in the town’s historic district, flanked by supporters and a large to-scale cutout of a gray elephant, Bachmann played up her tea party credentials and emphasized her Iowa upbringing as the foundation of her career as an activist, public servant, and mother. “I often say that everything I need to know I learned in Iowa,” she said.

In Bachmann’s new campaign narrative, Minnesota is just the place where she happens to live; Iowa is where she comes from. “I remember telling my mother we couldn’t possibly move to Minnesota because I hadn’t even been to the state capitol in Des Moines yet,” she said, in a speech that included odes to her time as a young girl at Waterloo’s Hawthorne Elementary School.

Bachmann’s consistent socially conservative record has been seen as one of her greatest strengths in Iowa, but she made clear on Monday she intends to make her Hawkeye heritage a central part of her message as well.

Bachmann, whose career as a Minnesota state senator was consumed by an almost singular devotion to fighting same-sex marriage and the creeping gay agenda, made no mention of New York’s decision to legalize gay marriage last Friday, except indirectly (“the family must be preserved”).

Her “earthquake issue,” as she once called gay marriage, went unmentioned, as did nearly anything resembling a concrete policy agenda. She bragged about breaking into politics by opposing Minnesota’s curriculum standards, but neglected to get into the details—which was probably for the best, considering that one of her allies’ central arguments back then was that George H.W. Bush was involved in a plot to bring about a one-world government and implement a Soviet-style state-planned economy. She presented herself as a uniter who could lead the party to success come November, 2012. “Americans aren’t interested in affiliation; they are interested in solutions, and leadership that will tell the truth,” she said. “And the truth is that Americans are the solution and not the government!” This was the new Michele Bachmann—focused, fact-checked, and deliberately vague.

It was a message that resonated with the crowd of about 100. Last night, Amy Kelash made the six hour drive from her dairy farm outside St. Cloud, Minnesota to see her “super hero.” Kelash was such a fan of her representative in Minnesota’s 6th congressional district that she designed and printed seven custom t-shirts—for her mother, husband, and four kids—that read: “Michele Bachmann. Super Hero.”

“Mickey Mouse could beat Obama right now,” said Joyce McBride of Waterloo. “Or a potted plant.” So she’s giving Bachmann a serious look. “If she can show that she’s read the Constitution and is ready to adhere to it? Great.”

For Ruth Cousins of Shell Rock, Iowa, it’s not simply Bachmann’s message that resonates, but the way she says it. “When you’re someone like me who’s active and knocking on people’s doors, you want someone who can inspire that passion,” she said.

And ultimately that might be Bachmann’s greatest asset, and one that observers like Wallace would do well to take note of: few politicians have done more to motivate conservative activists over the past three years than Bachmann. While avoiding the kind of incendiary rhetoric that’s landed her in trouble in the past—that the president harbored “anti-American” views, for instance, or that gays are attempting to indoctrinate public school students—Bachmann warmly embraced her label as a tea party candidate.