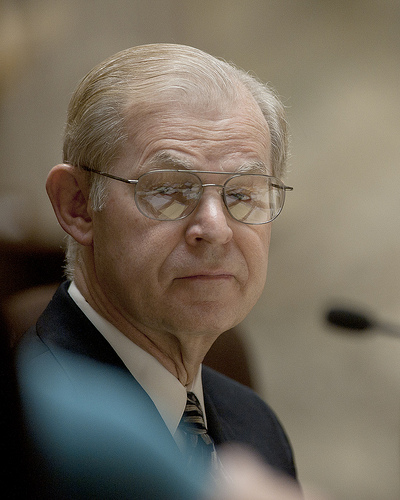 The fireworks just keep coming and coming out of Wisconsin, the flashpoint for the grassroots uprising against the GOP’s war on unions and workers’ rights. Here’s a breaking news headline from this morning:

Prosser, of course, is conservative Wisconsin Supreme Court Justice David Prosser, who narrowly won re-election to the state’s high court this spring in one of the closest judicial races in Wisconsin history. Now, Wisconsin Public Radio and the Wisconsin Center for Investigative Journalism (WCIJ) are reporting that Prosser allegedly grabbed a fellow justice, Ann Walsh Bradley, around the neck with both hands during argument shortly before the court ruled on June 14 to uphold Republican Governor Scott Walker’s bill to curb collective bargaining rights for most public-sector unions.

Asked to respond, Prosser told WCIJ he had “nothing to say.” Justice Bradley said the same to Wisconsin Public Radio. Here’s more from the story:

The sources say Capitol Police Chief Charles Tubbs was notified of the incident. One source says Tubbs came in to meet with the entire Supreme Court about this matter. Tubbs, contacted by Wisconsin Public Radio, declined to comment.

Sources also say the matter was called to the attention of the Wisconsin Judicial Commission, which investigates allegations of misconduct involving judges. James Alexander, executive director of the commission, said Friday that “we can neither confirm nor deny” that the incident was under investigation. “The commission hasn’t given me any authority to make any confirmation.”

Amanda Todd, spokesperson for the court, sent an email to the full court on Friday afternoon informing them of the Center’s media inquiries on the matter. Reporters also contacted each justice individually. As of the end of day Friday, none of the justices had commented.

The Supreme Court’s decision to uphold Walker’s bill not only angered Democrats and union supporters but split the high court itself. The court’s chief justice, Shirley Abrahamson, blasted the four justices (among them Prosser) who wrote the majority opinion, writing that they “make their own findings of fact, mischaracterize the parties’ arguments, misinterpret statutes, minimize (if not eliminate) Wisconsin constitutional guarantees, and misstate case law, appearing to silently overrule case law dating back to at least 1891.” The court’s decision overturned a district court judge who said Republicans in the Wisconsin legislature violated the state’s law open meetings law during the passage of Walker’s bill.

To be clear, the details of Prosser’s alleged misconduct are still somewhat unclear. But if substantiated, these latest allegations aren’t the first time Prosser has been accused of mistreating female judges. In early 2010, Prosser lashed out at Abrahamson in a closed-doors meeting, calling her a “bitch” and threatening to “destroy” her.