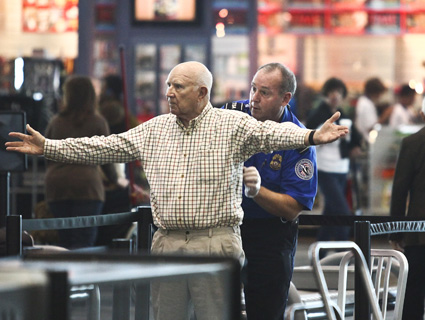 Texas lawmakers are expected to vote on a bill Wednesday that would effectively outlaw many routine airport searches by the Transportation Security Administration. If it passes, a TSA screener who touches the “anus, sexual organs, or breasts” of a passenger without probable cause could face jail time—a prospect that has the Obama administration threatening to sue the Lone Star state and even cancel flights. A rattled state Senate seemed to have dropped the bill before Gov. Rick Perry put it back on the agenda again last week, perhaps seeing a high-stakes fight with the feds as fuel for a presidential bid. But why stop at that? Some of the bill’s most enthusiastic backers view it as a key first step towards an even bigger goal: The establishment of an independent Republic of Texas.

“If the federal government follows up on its threat and suspends air travel, I honestly think we are going to gain a lot of members in a big hurry,” says Dave Mundy, media director for the Texas Nationalist Movement (TNM), a pro-secession group that claims an active membership of 10,000. “An air embargo, which is what they are talking about, would actually be an act of war. I mean, that’s what happens when you declare war on somebody. You establish a no-fly zone.”

Yesterday, TNM president Daniel Miller wrote on the group’s website that “Texas is not Iraq.” (“Will Washington choose to engage the Texan 149th Fighter Wing and their F-16 air superiority fighters?”) Miller also pointed to this “brilliant” observation from an anonymous blogger: “The state of Texas has more military capability than the United Kingdom, and so, unless Washington plans to nuke them, they might want to consider how well they might do engaging Texan F-16s while they allege the right to violate United States Code and the Constitution.”

Miller wasn’t immediately available for an interview, and Mundy sought to downplay any suggestion that the Texas Nationalists are eager to go to war. “Even the most hardcore of the statists really do not want to take up arms,” he told me. “They may talk a good game for a minute, but once they start seeing bombs falling on Walmart, they will change their tune.” Still, Mundy felt that the TSA bill could be the “impetus” for the Texas Nationalist Movement to expand deeper into politics, possibly through the creation of its own Texas Independence Party.

Mundy, a balding former Marine with a thick goatee, lives in Gonzales, a tiny town that played a large role in the creation of Texas. In October, 1835, Mexican troops from San Antonio arrived in Gonzales to seek the return of a small cannon that locals had been given to ward off Indians. When the town refused to give it back, the first shots of the state’s war for independence were fired. Mundy publishes a weekly newspaper in town, the Gonzales Cannon, which is neutral on Texas nationhood and mostly covers things like football games and girl scout meetings. He’s also the author of an e-book entitled, “Dances with Chihuahuas.”

That Texas already won its independence and managed to govern itself for 10 years before joining the United States certainly helps the nationalist cause, Mundy acknowleges. Indeed, nationalism is such a part of the state identity that it’s hard to separate the serious Texas nationalists from the merely romantic ones. The group claims to have signed up 200,000 supporters on its website.

Mundy, for his part, angrily denounces secessionist posers. He dismisses Gov. Perry’s infamous pro-secession comments of 2009 as mere “pandering,” calling him a RINO (Republican in Name Only) who “makes great statements but never backs up his words with deeds.” Mundy first soured on Perry when the governor promised to build a 4,000-mile megahighway and then wimped out as soon as his people started getting death threats. He thinks Perry’s recent embrace of the TSA anti-groping bill is just another political ploy, and that a return to Texan nationhood would bring about a return of real leaders, people like the late great Daniel Boone.

UPDATE: The anti-TSA bill went down in flames late this morning, but Mundy still sees the fracas with the feds as a benefit to his cause. “Even if the bill doesn’t pass,” he told me yesterday, “I think we have sent a message.”