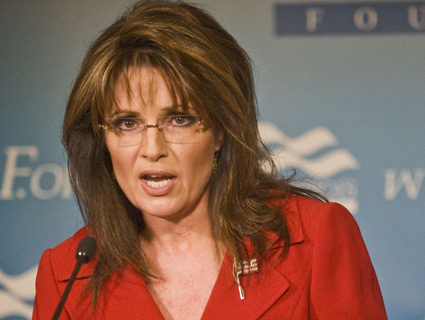 There’s a simple way to enrage the attack hounds of the right: Engage in journalism.

Right-wing bloggers and commentators have been huffing about the Sarah Palin email chase, which I kicked off in September 2008, when I asked the state of Alaska to release all her gubernatorial emails under its open records law. Last week, the state, after nearly three years of delay, handed out boxed sets containing 24,199 pages of Palin’s electronic correspondence, and journalists immediately began combing through the documents looking for newsworthy information. Given the initial absence of any bombshells—no emails, say, in which Palin calls McCain a dimwit or reveals shocking secrets about herself—conservatives have gleefully dismissed this exercise as a futile endeavor. Glenn Beck derisively claimed that the email request “produced exactly zero interesting material.” In the Wall Street Journal, John Fund wrote, “Call it the stalking of Sarah Palin…[T]he left-wing magazine Mother Jones requested Ms. Palin’s gubernatorial emails during the 2008 election. After lengthy delays they were released last Friday in Juneau. The fact that you heard almost nothing about them is because there is almost nothing salacious or scandalous in them.”

The release of the records was all over the news. Maybe Fund missed that. Nevertheless, Fund groused that reporters have not been as interested in Barack Obama’s “paper trail,” meaning the president’s “college records and papers; his application to the Illinois bar to become a lawyer; his complete list of clients while he was in private practice; and his records from his service in the Illinois State Senate.”

Where to begin? Let’s start with process. Fund skated past a basic point: Palin’s emails were public documents that could be requested by journalists or citizens. The Obama records he mentions are mostly private and cannot be obtained under open-records laws. (Regarding Obama’s state Senate papers, most legislatures are not subject to freedom of information laws. Ditto Congress.) Had any of these Obama documents been available to the public, there’s no doubt they would have been requested during the 2008 campaign by journalists—perhaps even by Fund. There’s also this difference: While college records from decades earlier might be interesting, they do not reveal as much about a candidate’s current capabilities and character as more recent emails showing how he or she conducted official business. If Obama’s or Hillary Clinton’s senatorial emails had been subject to the Freedom of Information Act, I’m confident reporters from a variety of outlets would have sought access to them.

As for the claim that the emails have produced no noteworthy information about Palin, Fund, Beck, and other conservative naysayers are wrong—and playing the reverse version of the gotcha game: If information isn’t “salacious or scandalous,” it is without value.

In assessing the Palin document dump, you first have to start with this basic point: The state did not release all of her emails. (In fact, becasue Palin had used several personal email accounts to conduct official business, the state was unable to gather a complete set of emails related to her job.) The messages handed out on Friday only cover the first half of her half-term as governor; there are no emails in this release after the end of September 2008. The state will release emails from the time period covering the second half of the 2008 campaign—and Palin’s surprise resignation the following July—at some yet-to-be-declared date. And this document release was highly selective. After over two years of reviewing the records, the state withheld 2,275 pages of material. (The lawyers who vetted the emails first worked for Palin, while she was governor, and then her replacement, Sean Parnell, who had been her lieutenant governor.) The list of the emails held back runs 189 pages. For most of these messages, the state provided no description. But in many instances, the brief description on the list raises questions about the propriety of the decision to keep them secret. Here are a few examples:

• “re meeting with staffer for Vice President Cheney about gas pipeline”
• “re media questions about Todd Palin’s work and potential conflict of interests”
• “re idea for responding to personal attacks”
• “re response to parental consent ruling” (Released emails show that Palin had urged her staffers to vote in a radio station poll regarding an Alaska state supreme court decision regarding parental consent.)
• re draft bullet points about Walt Monegan” (He was the state official Palin had fired during the Troopergate scandal.)
• “re use of inaugural funds”
• “re special counsel investigation” (Troopergate led to a special counsel inquiry.)

There is also an unexplained gap in the emails distributed on Friday. Palin was sworn in as governor on December 4, 2006, and the email collection starts with several emails covering December 4 through December 8. Then there are no emails until December 30. (And there are no emails from these dates listed in the registry of withheld emails.) What happened? “I don’t have any information on the missing documents,” Linda Perez, administrative director for Gov. Parnell, told the Anchorage Daily News.

The pages that were released are riddled with redactions. (One long exchange with a top aide, under the subject heading “same sex,” is almost completely blank.) Given the redactions, withholding, and partial release, there is no way to determine whether the state engaged in legitimate vetting or Palin protection. But there’s enough evidence to spark suspicion.

The emails that were made public—which can be found at a searchable database sponsored by Mother Jones, MSNBC.com, and ProPublica—did indeed contain newsworthy nuggets. A sampling:

• A May 3, 2007, email showed that Palin was a fan of John Hagee, a controversial evangelical leader who had called the Catholic Church a “great whore” and the Holocaust “God’s will,” and who deemed Hurricane Katrina God’s retribution for a gay parade that was to be held in New Orleans. In this email, she told her staff that she wanted to be in Juneau on a certain day so she could participate in a religious event Hagee was holding.

• Palin’s staff made certain that she did official business via personal email accounts, not state email accounts. In a September, 22, 2007, message, aide Frank Bailey warned Palin: “Governor, all of your emails are coming from your State account (govpalin@alaska.gov) right now, not your yahoo. I’m going to check with Barb on that, and its probably a setting that got accidentally changed on Friday.” (In emails sent throughout 2007 and 2008, Palin and her aides discussed whether emails sent through their personal accounts and government-paid Blackberrys could be subpoenaed. Several emails on this matter were withheld.)

• Numerous emails show her being highly concerned that the media—long before she was a national figure—was out to get her.

• Months before she joined the Republican ticket in 2008, Palin and her aides saw her as a potential national leader for the party—and wanted her to take a Newt Gingrich-like stance. In a February 17, 2008, email, a Palin aide wrote about a speech she was drafting for the governor: “Incorporated in a draft speech what newt said: good conservatives must declare their independence from the r party and start looking introspectively or R’s will continue to fail… Man, you really are the PERFECT person to deliver such a msg!”

• Two weeks before she gave birth to her son Trig, Palin sent a heartfelt letter to family and friends, written from the perspective of “Trig’s Creator, Your Heavenly Father.” The letter [PDF] revealed a different side of the governor.

• Palin did what she could to encourage talk of her prospects of being John McCain’s running mate. After the state repealed a fuel tax, her aide Ivy Frye wrote to her, saying, “I’ll send to McCain’s camp after presser or the bill comes out. They’re going to love it!… More vp talk is never a bad thing, whether you’re considering vp or not. say President Palin sounds better tho…”

• In emails, Palin referred to Republican state Rep. Jay Ramras, who had criticized her, as a sexual predator. She also dismissed Ramras, who is Jewish, with an arguably anti-Semitic description: “Jay Bird-Nose Ramras.” She added that he was “a doof.”

• In the early days of her stint as Alaska governor, Palin, according to a March 16, 2007, email was reluctant to be seen as a social conservative crusader. As a gubernatorial candidate, she had supported a statewide ballot question outlawing benefits for same-sex couples in Alaska. But after winning the governor’s race, Palin, in this email, told her aides that she had “asked that I not be a focus here – my belief is administration should NOT attempt to sway the outcome of ballot props.” She added, “my belief that we weren’t supposed to try to sway the vote once it’s in the hands of the people.”

• After the Alaska legislature hired Stephen Branchflower to investigate possible ethics violations by Palin in the Troopergate case, Team Palin considered spreading rumors about Branchflower’s wife to undermine his credibility. As MSNBC.com reported, “In a series of emails on Aug. 1, 2008, the governor and her aides discussed how to respond to the inquiry. The conversation is heavily censored.” But at one point, press aide Sharon Leighow noted, “I dropped all sorts of questions about linda,” referring to Branchflower’s wife. Palin replied, “Thank u.”

Many of the emails display Palin in all her Palin-ness (“Holy flipping A,” “Unflippinbelievable”) and disclose intriguing insights about her work and family life. Her fans cite specific emails that cast her in a positive light. Though the state withheld much material, the emails that were turned over expand what’s known about Sarah Palin, a political celebrity who at the moment remains a possible presidential contender. And that’s the point of journalism. Yet due to the state’s redactions and suppressions, these emails, it is certainly true, do not tell the full story.