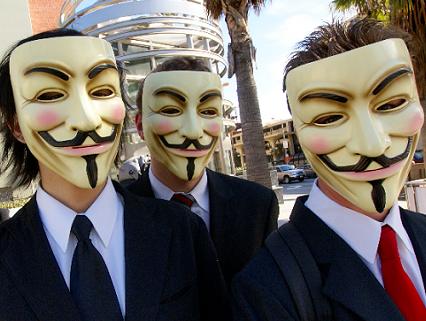 They called it Military Meltdown Monday, and it’s certain to raise the temparature in national security circles. Anonymous, the hacktivist hive mind that’s messed with Scientologists, the Westboro Baptists, and WikiLeaks’ foes, set its sights on defense megacontractor Booz Allen Hamilton and came back with 90,000 military emails and passwords. “Thanks to the gross incompetence at Booz Allen Hamilton,” the group boasted yesterday, “probably all military mersonnel [sic] of the U.S. will now have to change their passwords.”

AntiSec, a hacker group allied with the Anons, announced the coup (and dumped the data) on the Swedish site The Pirate Bay with a helping of mirth: “We infiltrated a server on their network that basically had no security measures in place…and began plundering some booty. Most shiny is probably a list of roughly 90,000 military emails and password hashes…Happy cracking.”

Why was Booz Allen targeted? As Mother Jones‘ Josh Harkinson has reported in his Chamberleaks series, last February Anonymous went after Aaron Barr, a computer security expert “who’d tried to infiltrate the well-known hactivist group and sell his findings to the FBI.” Barr’s emails show that he’d been coordinating his Anonymous investigation with Booz Allen, a large military contractor that generates 84 percent of its revenue from defense deals.

The firm also provided “oversight” for the Bush administration’s interception of international financial records “as a substitute for genuine checks and balances on its surveillance activities,” according to the ACLU. In its statement, Anonymous wrote that it “has been investigating them for some time, and has uncovered all sorts of other shady practices by the company, including potentially illegal surveillance systems, corruption between company and government officials, warrantless wiretapping, and several other questionable surveillance projects.”

It’s hard to say just how momentous this break-in was—neither Booz Allen nor the Pentagon have commented on it yet—but it has certainly excited hackers as they set to work decrypting the military email accounts’ passwords. And Anon’s touting the caper with characteristic bravado. Near the end of its Pirate Bay missive, the group includes a bill to Booz Allen for $310 “for our audit of your security systems.” And finally: “Pwned. U mad, bro?”