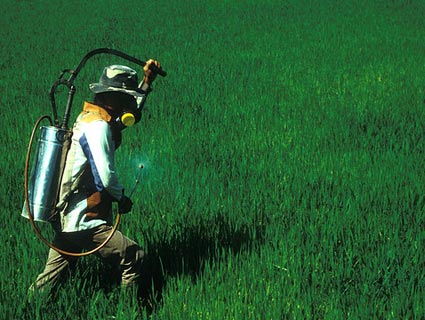 Back in the mid-’90s, Monsanto rolled out seeds genetically engineered to withstand its Roundup herbicide. To ensure huge growth potential, the company shrewdly chose the most widely planted, highly subsidized US crops to grace with its new “Roundup Ready” technology: corn, soy, and cotton.

The pitch was simple and powerful: No longer would large-scale farmers need to worry about weeds. All they would have to do was douse their fields with Roundup, which would wipe out all plant life except the desired crop. Farmers leapt at the technology. It represented a fantastic labor-saving opportunity, allowing them to manage ever-larger swaths of land without having to pay more workers.

Today, Roundup Ready crops blanket US farmland. According to USDA figures, 94 percent of soybeans and more than 70 percent of corn and cotton planted in the US contain the Roundup-resistant gene. Back-of-the envelope calculations tell me that nearly 200,000 square miles of prime farmland—a land mass about two-thirds the size of Texas—now grow crops rigged to flourish amid an annual monsoon of Roundup.

Well, in what is surely the least surprising, most-anticipated major development in the history of US agriculture, farmers are discovering that when you spend years dousing land a single herbicide, ecosystems adapt. Roundup Ready crops, meet Roundup-defying weeds.

Such “superweeds” have been vexing farmers for several years now, but this season, according to a stark report in Monsanto’s home-town paper The St. Louis Post-Dispatch, the problem is galloping out of control. In recent years, farmers have had to supplement Roundup with other, harsher herbicides, subjecting their land to highly toxic chemical cocktails. But now, weeds are developing resistance to the cocktails, too. The Post-Dispatch reports that “in some areas of the state, certain weeds have become resistant to three herbicides. In Illinois, some weeds have become resistant to four.”

The problem is accelerating, because the resistant weeds are driving out their non-resistant counterparts, and also cross-pollinating them with the resistant gene, spreading it far and wide:

These weeds adapt faster and more vigorously than their weed cousins, choking fields and clogging irrigation ditches so badly water can’t pass through. “Pollen can transfer the resistant trait; that’s the problem,” said Kevin Bradley, a weed scientist with the University of Missouri. “There’s not much we can do about pollen flying through the air, and that’s why we see such rapid spread of resistance.”

Now, as I reported recently, the USDA openly acknowledges the superweed problem and even delivered a pretty good explainer on it in its environmental impact statement (PDF) on Roundup Ready alfalfa. Yet it keeps deregulating or choosing not to regulate at all new Roundup Ready crops, all of them quite widely planted. This year alone, the agency has green-lighted Roundup Ready versions of alfalfa (a major cow feed); sugar beets (source of half of US sugar), and most recently, Kentucky bluegrass (popular lawn turf). These dubious USDA decisions will likely bring millions more acres—including lawns, parks, and golf courses near you—under the Roundup Ready domain. From the USDA’s perspective, superweeds—and the toxic cocktails they call forth upon the to land—are simply something we have to live with.

As for farmers, crop prices are high enough—thanks, ethanol!—that they’re still eking out a profit despite having to buy and spray the extra herbicides, the Post-Dispatch reports. And in many cases, Monsanto’s market dominance is so complete that farmers literally have no other alternative than to buy Roundup Ready seeds. For example, it’s virtually impossible to buy non-Roundup Ready sugar beet seeds.

As for Monsanto, well, as I reported Tuesday, Roundup sales are booming. The company expects to clock $700 million in profit from that product alone this year. And it has a plan for complaints about Roundup resistance. It will develop crops resistant to other poisons, creating whole new cycles of profit and ecological destruction. The Post-Dispatch reports:

There is, however, some hope in the pipeline. Monsanto is working on developing soybeans and cotton that are resistant to the chemical dicamba. The cotton could be on the market within three years.

Dicamba is a truly nasty poison—it makes the Pesticide Action Network’s “bad actor” list, and is classified as a “developmental or reproductive toxin.

Meanwhile, Roundup’s status as a relatively benign agrichemical poison is coming under withering attack. The latest: in a report last month (PDF) the European NGO Earth Open Source delivered an impressive body of evidence that Monsanto’s flagship herbicide causes “endocrine disruption, damage to DNA, reproductive and developmental toxicity, neurotoxicity, and cancer, as well as birth defects.” Those are explosive claims, given that Roundup and other forms of glyphosate are now the most-used herbicide in the world. I’ll be digging into the report over the next couple of weeks.