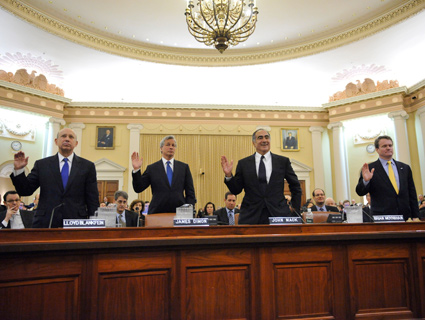 The leaders of four of the biggest US banks are sworn in during a hearing before the Financial Crisis Inquiry Commission, or FCIC.Jay Mallin/Zuma

When it came time for the bipartisan Financial Crisis Inquiry Commission to unveil its final report on the causes of the worst economic meltdown since the Great Depression, the commission’s 11 members were bitterly divided. In the end, the FCIC’s Republicans refused to put their names on the commission’s final report. Instead, they released their own questionable narrative of what caused the crisis. Then there was Republican commissioner Peter Wallison, who broke with both Democrats and Republicans and published a solo report that, despite bundles of evidence to the contrary, pointed to government housing policy and fallen housing giants Fannie Mae and Freddie Mac as the major causes of the financial crisis.

On the front page of his dissent Wallison listed his employer: the American Enterprise Institute (AEI), an influential conservative think tank in Washington, DC, where he’s a fellow in financial policy.

By claiming Fannie and Freddie triggered the crisis, Wallison had deployed a talking point straight out of the AEI playbook. Now, in a damning new report, the House oversight committee reveals that the ties between the FCIC’s Republicans and AEI run much deeper than suspected—and that the influence of AEI-affiliated commissioners may have undermined the commission’s work.

The House report, written by the committee’s Democratic staff, resulted, ironically, from a prior investigation by Rep. Darrell Issa (R-Calif.), then the committee’s ranking member. That probe turned up more than 400,000 records related to the work of the commission’s Democratic and Republican commissioners and staffs. (Issa is now the chairman of the oversight committee.) Issa alleged that the FCIC’s Democrats and their staffs had mismanaged the commission’s $8 million appropriation (it received an additional $1.8 million in July 2010) and had “extensive ties” to “partisan Democrat politics” that would skew the FCIC’s final report on the causes of the crisis.

The opposite appears to be true. “The documents raise significant new questions about whether Republican Commissioners geared their efforts on the Commission toward helping House Republicans in their campaign to repeal the Dodd-Frank Act, rather than determining the facts that led to the economic crisis,” the report says. It gives a clearer picture of the behind-the-scenes machinations of what many saw as a failed commission. And the Republican commissioners highlighted by the House report used their AEI ties to not only undermine the FCIC’s work but also skirt ethics rules designed to protect the integrity of the taxpayer-funded group.

Phil Angelides, the Democrat who chaired the FCIC, says the new allegations do not undermine the findings or credibility of the FCIC’s final report. But he added that certain Republican commissioners’ partisanship was evident throughout the process. “The Republicans made their appointments and their affiliations were clear,” he says. “I think what we learned today was there was a deliberate partisan effort to undermine the report, and to protect Wall Street.”

The Dems’ report zeroes in on Wallison in particular, noting that he pushed his fellow GOP commissioners to use their position on the FCIC to repeal the Dodd-Frank financial reform bill, which Obama signed into law in July 2010. (The FCIC was still crafting its final report at that point.)

In a November 3, 2010, email, Wallison wrote to fellow GOP commissioner Douglas Holtz-Eakin, “It’s very important, I think, that what we say in our separate statements not undermine the ability of the new House GOP to modify or repeal Dodd-Frank.” The following day, Wallison sent an email to FCIC vice chairman Bill Thomas, to which he attached an news story titled, “GOP Pledges Major Changes to Dodd-Frank, Fannie and Freddie, CFPB.” In that email Wallison wrote, “[Rep. Scott Garrett] has also suggested in the past a complete repeal of Dodd-Frank. This effort should not be undermined. That law will suppress economic growth because it was based on the idea that more regulation was necessary. [Soon-to-be Speaker of the House John] Boehner also said yesterday that changing this law was a priority.”

That private lobbying against Dodd-Frank was on display in Wallison’s dissent to the FCIC’s main report on the crisis. He wrote that the Dodd-Frank bill “was legislative overreach and unnecessary.”

Wallison, the House oversight report states, violated FCIC ethics rules by leaking confidential committee documents on multiple occasions to Ed Pinto, a former Fannie Mae official who now works at AEI. The FCIC’s general counsel later found that Wallison had, in fact, violated ethics guidelines by leaking the information to Pinto. (Wallison did not respond to a request for comment.)

While on the commission, Wallison’s cozy ties with AEI and insistence on peddling the think tank’s debunked view that Fannie and Freddie triggered the financial crisis worried both Democratic and Republican members of the commission, the new report says. A special assistant to GOP commissioner Thomas, who called Wallison “intractable,” wrote of Wallison and AEI’s Pinto, “I can’t tell re: who is the leader and who is the follower. If Peter is really a parrot for Pinto, he’s putting a lot of faith in the guy.”

Other commissioners also questioned Wallison’s Fannie-Freddie theory. “I continue to think that Peter overplays the mortgage issue,” wrote Republican commissioner Holtz-Eakin. FCIC chairman Phil Angelides, a Democrat, emailed Wallison to say that the commission had considered his position and found it “flawed.” Angelides hinted at Wallison’s intransigence, writing that the commission’s staff “has spent more time responding to your questions and requests for information than any other Commissioner.”

The committee report also found that Republican vice chairman Thomas gave internal FCIC documents to Alex Brill, a research fellow at AEI. (Thomas did not respond to multiple requests for comment.) Brill is also the CEO of an outside political consulting group. Brill, who was not on the commission’s staff, was given drafts of FCIC memos, internal information about upcoming FCIC investigations, and “information about how the Commission staff would treat specific corporations under investigation (such as Citigroup).”