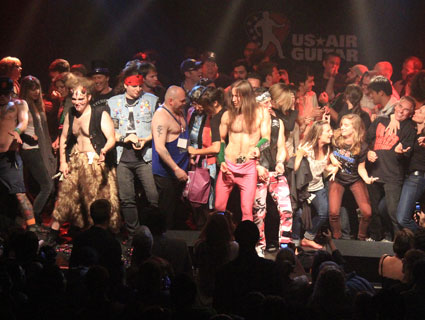 Contestants and crowd mingle at the US Air Guitar regional championships in San Francisco. Photo by <a href="http://journalism.berkeley.edu/profiles/christopher_connelly/">Christopher Connelly</a>.

Going to an air guitar show is like going to a three-drink-minimum comedy club. You’re never sure how you ended up there. You walk into a room where “Jessie’s Girl” is playing, sparsely crowded with Saturday-night patrons borrowed from sports bars, heavy metal shows, comic conventions. Things are running an hour late, and you have to wonder why you’re waiting around to watch a bunch of people get on stage and pretend to play the guitar. The merchandise is also pretend: They’re selling “air vinyls” at $5 a pop. Air vinyls? “There’s nothing on it,” explains the woman behind the table. “You can take it home and smash it if you want.” (None have sold thus far.)

You consider leaving before the show starts. It’s still early. You could probably still make the next screening of the new X-Men movie, and by next weekend you’ll already have filed away the experience as just another one of those weird encounters. But ultimately you can’t justify leaving, because you just paid $20 to get in. So you go to the bar.

That’s the scene at The Independent in San Francisco, one of twenty-some cities on the regional-championships tour (yes, really), and where this event is apparently so popular that it’s taking place over two nights to meet demand. Indeed, whether they arrived out of curiosity, loyalty, irony, or boredom, by the time the lights dim, the room is nearly packed.

Our host, Hot Lixx Hulahan, a two-time national and one-time world champion, breaks the ice with a remake of “Total Eclipse of the Heart,” sung (for real) as a duet with fellow champion emeritus Björn Türoque (pronounced “to-rock”) on air keyboard and two air guitars. I get a little lonely living in the basement with my mom…Together we can make it to the end of the song! He surveys the audience for newcomers and return customers; the majority identify themselves as the former. And since the majority has no clue what’s about to go down, Hot Lixx Hulahan runs through the criteria. Some 15 contestants will perform and be judged on a six-point scale, a la professional ice skating, for technical merit, stage presence, and general “airness.” One last request: “Please don’t be sober for this event.”

In the next few hours, there is a wide range of acts, costumes, and make-up, at minimum paying homage to various rock legends. They are subtly distinct from those who seem merely desperate for attention: the man dressed as a “goat demon” in several kinds of faux fur; Shred Boyardee; Grand-Motley Poo, a vulgar grandma dressed as a vulgar grandma; someone who ate a banana on stage; and Dirty Airy, who was naked save the American flag draped over him, and a sock in a place where socks are seldom worn (unless you’re a Red Hot Chili Pepper).

The crowd, given time and many return trips to the bar, buys into it—sort of. If they like you, they hurl colorful (and possibly worn) bras up on stage, maybe a thong, a plastic foot, or a rubber chicken. A performer might cross that arbitrary weirdness threshold, provoking both rowdy chants and angry boos. The judges, two veteran air guitarists and a “real” musician, Frank Portman—author of King Dork and front man of the ’80s punk outfit Mr. T Experience—oddly mirror the personas of Simon, Paula, and Randy, pairing constructive criticism (“You lost your guitar a bit along the way…” or “You nailed every note!”) with tasteless jokes (“You better be getting nailed tonight!”).

It isn’t until you talk to the contestants that you realize this is not just a drawn-out comedy sketch. After all, the professional air guitar following is growing, to the astonishment of most, here and worldwide—the first such US competition, held atop a strip club in downtown Manhattan in 2003, couldn’t get enough contestants to sign up at first.

“When you care about something to a specificity, it becomes an art,” one of the judges, a former champ, tells me.

One performer, competing under the pseudonym Tiger Claw, has been air guitaring for 30 years—basically, ever since he picked up that tennis racket. He doesn’t play an actual instrument, though not for lack of trying. Tiger Claw, a.k.a. Dan LaFever, is an investment-firm office manager who owns four actual guitars but knows only two chords and one scale. He usually plays for 10 to 15 minutes at a time, gets frustrated, and instead pops in Van Halen or Iron Maiden, then plucks and strums away at the free air.

Air guitar, after all, is more about your dedication to the song than hitting every note. “It’s really important to listen for movement in the music,” says David Jung, a.k.a. C. Diddy, one of tonight’s judges and a comedian who in 2003 became the first American air guitarist to win the world championship. “When you care about something to a specificity, it becomes an art.”

And if you don’t care?

“We usually see that manifest in the new competitors,” Jung says. “They’re kind of jokey about it and self-effacing. Then they go up there with a gag, and that gag runs dry in 10 seconds. But when you do it, it really likens to theater. You have to be able to transcend the mind.” Besides, he adds, the audience has already bought into the premise of there being no live music, so anything less than absolute commitment leaves them dissatisfied.

One audience member sporting a pixie cut and a leather bomber jacket tells me it was her fourth time. I said she must be a fan.

“It’s like watching bad TV,” she explains. “It’s mindless—something to do after a long day at work, you know?”

This gap between the audience and competitor’s perception of air guitar persists until you see a performance that’s genuine, Jung says. “Then you get it.”

I didn’t get it my first time, but yeah. I’ll be going back next year.