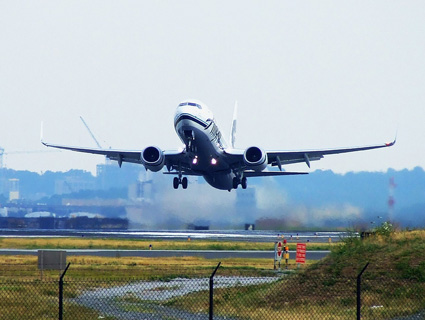 This story first appeared on the ProPublica website. It has been updated. Look to the asterisks (*) for the latest.

Thought Congress had averted a government shutdown by striking a 2011 budget deal back in April? That’s only partly true.

While lawmakers deadlocked over long-term deficit reduction plans tied to the raising of the debt ceiling, one federal agency—the Federal Aviation Administration—sat in partial shutdown for more than a week. The debt ceiling is resolved (for now), but the FAA’s partial shutdown looks likely to continue for at least another month.

After the debt ceiling vote, Congress left for recess without reaching an agreement to extend the operating authority of the FAA, meaning the agency currently doesn’t have the authority to collect taxes on ticket sales, which it uses to pay some 4,000 employees’ salaries. The lost revenue amounts to about $200 million a week—or more than $1 billion—in lost revenue from the ticket taxes.

As a result, thousands of workers have been furloughed and may not get paid for days missed. And without FAA officials to oversee airport construction projects, the agency has issued stop-work orders to more than 200 projects across the country, putting an estimated 70,000 private-sector construction workers temporarily out of work as well.

Can I still fly—and is it safe?

Yes, you can still fly. As we explained back in April when the government was at risk of closing its doors, when a shutdown occurs workers are either categorized as essential or nonessential. Air traffic controllers and plane safety inspectors, of course, have been deemed to be essential and are still on the job.

*While Transportation Secretary Ray LaHood has continually said that safety hasn’t been compromised, one former FAA chief told CNN that the shutdown itself does present a safety issue—one that has only been mitigated because some FAA workers have been willing to work without pay.

*As former FAA Chief of Staff Michael Goldfarb noted, the FAA’s 40 airport inspectors—who make sure that runways and other airport systems are up to standard—were among those who were technically furloughed, but they’ve been asked to work anyway. So, for the time being, these inspectors are working with no pay and are paying their travel expenses out of pocket.

*Because of that, members of the public need not fly in fear. After all, Goldfarb pointed out, “Obviously all members of Congress are getting home to their districts safety.”

Who’s benefiting from this?

Probably not you. Initial reports suggested that minus the ticket taxes, consumers could reap some savings on air travel—and some may have at first. But some airlines soon changed their minds and raised their prices so tickets now cost about as much as if the tax were still there. In other words, money that would have gone to funding the FAA has gone straight into the pockets of some major US airlines.

“This short-term additional revenue for airlines, which does not mean a fare increase for consumers, benefits all stakeholders—customers, employees and investors—by temporarily improving tiny industry margins to better cover costs and enable airlines to invest in their product and service,” a spokeswoman for the Air Transport Association, the trade group for large US airlines, told NPR.

So, why did Congress force the shutdown?

Several minor disputes have led to this impasse.

The first is an industry-backed provision by House Republicans that would make it harder for aviation and railroad workers to unionize, essentially by counting workers who didn’t vote in a union election as having voted against the union. President Obama has threatened to veto any FAA bill containing this measure, but it’s included in the House version of a long-term reauthorization bill anyway.

The second dispute is over a program—called the Essential Air Service Program—that provides subsidies to airlines that fly into tiny airports servicing more than 100 rural communities. House Republicans have tried to reduce those subsidies and phase them out in all states except for Alaska and Hawaii. The move has been opposed by some lawmakers whose states’ subsidies will be ended.

It’s worth noting that the Government Accountability Office has recommended that Congress reexamine whether funds for the Essential Air Service Program are being used efficiently. But it’s also unclear whether the lawmakers who’ve proposed cutting the program care much about it one way or the other. Rep. John Mica, a Florida Republican and chairman of the House Transportation committee, assured a conference of airport executives earlier this month that the House added the provision in a stop-gap funding bill as a bargaining chip to win concessions on the unionization issue, reported Aviation Week. “It’s just a tool,” Mica told the executives.

The third dispute is over the number of flights that should be allowed at Washington’s Reagan National Airport—another sticking point for lawmakers who frequent the airport more than the general public. The Washington Post describes the dispute this way:

The number of flights that should be allowed at National has long been a source of friction between members of Congress from the Washington region, who are concerned about noise and the region’s two other major airports, and their colleagues from distant states, who want more direct flights home.

Though these disputes are relatively minor, there’s also a bigger backstory that we’ve only just alluded to. It dates back to 2007—the year that the FAA’s last long-term operating authority expired. Ever since, Congress has been unable to agree on new long-term legislation and has instead kept the agency operating through short-term extensions—20 of them, to be exact. Congress was still trying to work out the 21st stop-gap extension when it left for recess, though Transportation Secretary LaHood has for months said the agency needs the sort of long-term reauthorization given to other federal agencies.

Who’s to blame for this?

Well, LaHood has placed the blame squarely on Congress: “Because Congress didn’t do its work, FAA programs and thousands of public- and private-sector jobs are in jeopardy,” he told reporters.

Democrats had insisted that Republicans drop the labor provision, which they viewed as an industry-backed assault on unions. Republicans had criticized Democrats for unwillingness to eliminate “wasteful programs” such as the rural airport subsidies.

Meanwhile, at the estimated cost of $30 million a day, the nearly two-week-long stalemate will likely waste several times more than what the $200-million subsidy program costs in a year.

When will it be resolved?

*Now that Congress has left for recess without resolving the issue, it seems the issue won’t be resolved at least until Congress gets back in session next month. Senate Majority Leader Harry Reid was vague when he spoke with NPR: “It’ll be closed until…maybe not September, maybe more than that,” he said. Or in other words, as one anonymous Senate staff member told the Post: “Don’t hold your breath.”