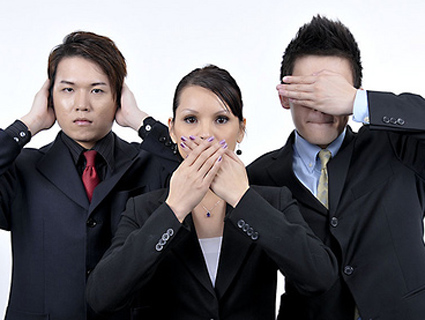 Water cooler fodder and petty gossip are two constants in an office environment—and thanks to the advent of Facebook and other social media hubs, coworkers have new ways to expel their work-related gripes. Yet nothing is sacred when words hit the web, and now those words are coming back with a vengeance. According to a National Labor Relations Board report (PDF) that came out last week, businesses have started to fire employees for their online trash talking.

Take the case of this luxury car dealership. In early June 2010, one of its salesmen, who I’ll call Fred, snapped photos of a customer accidentally driving a car into a pond at the dealership. Later that week, the dealership hosted an all-day event to introduce a new car model. According to employees, the dealership’s low-budget refreshment choice—hot dogs, cookies, and water—sent the wrong message to clients and negatively affected their sales and commissions. Fred combined the photos of the pond incident and the inferior sales event in a Facebook album and added snide comments reflecting his disapproval of his boss’s decisions. In an inevitable turn of events, someone at a neighboring dealership who was Fred’s Facebook friend mentioned the album to his supervisor, who then told the luxury dealership employer about the Facebook smear. Even after Fred agreed to take down the photos, he was fired.

According to the NLRB, an agency tasked to investigative unfair labor practices, he shouldn’t have been. The board’s test to determine if an employee’s actions were “concerted and protected” is to first gauge if the activity by individual employees was in pursuit of a common goal, and then question whether the employer knew of his employees’ activities. So co-workers can complain about something so long as they discuss it amongst themselves and then bring the complaint before their employer to engage in a group discussion. In Fred’s case, the NLRB decided that his Facebook activities mirrored the sentiments of his co-workers, who had already expressed distaste for the sub-par refreshments to their boss at a staff meeting, which the boss rebuffed. Also, the NLRB determined that since the employees work entirely on commission, they had every right to vocalize their opinions, even on Facebook.

But not all online bellyaching is protected. A “crime and safety beat” employee who posted inappropriate and offensive Tweets about his copy editors was discharged for misconduct. A bartender who complained (PDF) to a relative on Facebook that he hadn’t had a raise in years and that he hoped his “redneck” customers choked on glass as they drove home drunk was aptly fired for failing to bring these colorful complaints to a staff meeting. In these two incidents, the employees violated their work-related terms and conditions and failed to instigate a group discussion about their dissatisfaction.

THe NLRB report notes that the lack of social media standards that all businesses can turn to makes it tricky to tell what’s appropriate to voice online. As it stands, most illegal firings come before the board on a case by case basis. For now, according to the NLRB, your company needs to make sure that employees can’t misconstrue its policies, and employees should understand and discuss their social media rights with their managers. In many cases, if you present your aggravations to your peers and then to a staff meeting and your boss still doesn’t listen, you’re free to whine on Facebook.