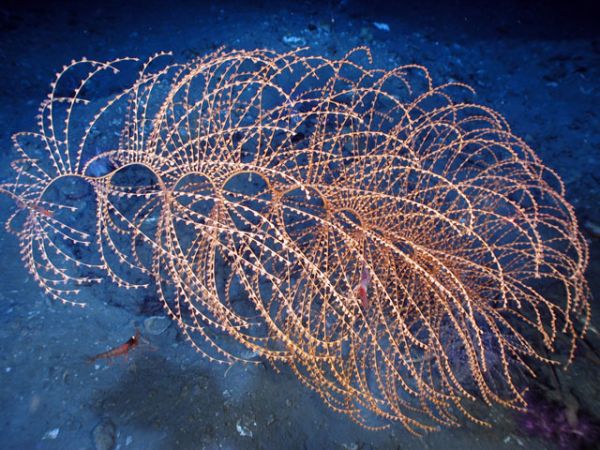 A sea whip found deep on the slope of the Gulf of Mexico. Credit: Aquapix and Expedition to the Deep Slope 2007.

The next chapter in our thinking about the oceans is analyzed in a new paper in PLoS ONE. The deep sea—largest of Earth’s ecosystems and its last great wilderness—has been spared much of what’s befallen the rest of the ocean in the last century, thanks to its remoteness. But not any more.

Technology is rapidly undressing this veiled realm, allowing us to exploit its fisheries, hydrocarbons, and minerals at depths below 2,000 meters/6,562 feet. The authors write:

[T]he challenges facing the deep sea are large and accelerating, providing a new imperative for the science community, industry and national and international organizations to work together to develop successful exploitation management and conservation of the deep-sea ecosystem. 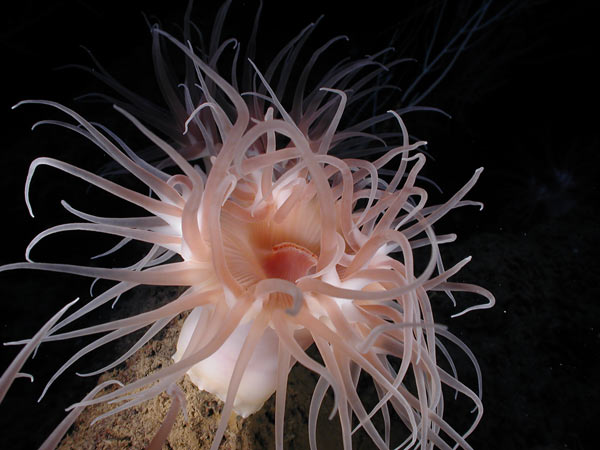 Anemone attached to a carbonate boulder at 1,500 meters/4,921 feet depth in the Gulf of Mexico. Credit: Aquapix and Expedition to the Deep Slope 2007, NOAA-OE.

The paper represents the combined thinking of 11 researchers from around the world—Spain, UK, Norway, New Zealand, Mexico, US, and France—including some of the biggest names in deep-sea research. Coauthor Lisa Levin, recently made the Director of the Center for Marine Biodiversity and Conservation at the Scripps Institution of Oceanography, was featured in my biodiversity article in MoJo, Gone.

Based on their own extensive experience, combined with published scientific papers, the authors provide a semi-quantitative analysis of the scale of of human activities past, present, and future. 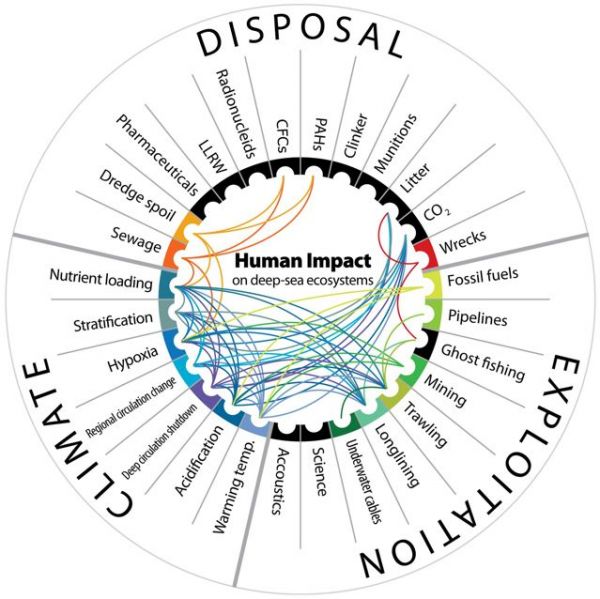 Synergies among anthropogenic impacts on deep-sea habitats. The lines link impacts that, when found together, have a synergistic effect on habitats or faunal communities. Credit: Ramirez-Llodra E, et al. PLoS ONE. DOI:10.1371/journal.pone.0022588

They assessed 28 major anthropogenic impacts (above), grouped into 3 main categories—disposal, exploitation, and climate change. They then examined those effects on 12 deep-sea habitats (below). I’ve added links to explanations of the terms: 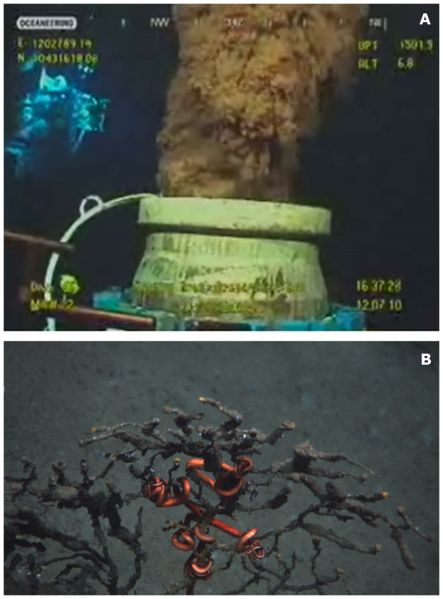 Deepwater Horizon oil slick in the Gulf of Mexico, 2010. (Top) photo of the oil being discharged in the water column; (Bottom) a coral in the deep Gulf of Mexico, with attached ophiuroid, covered with oil. Credit: Lophelia II 2010, NOAA OER and BOEMRE.

The authors conclude that a sea-change is underway:

Based on the current knowledge available in the scientific community and expert estimates, we suggest that the overall anthropogenic impact in the deep sea is increasing, and has evolved from mainly disposal and dumping in the late 20th century, to exploitation in the early 21st century… During the remainder of the current century, we predict that the major impact in the deep sea will be climate change, affecting the oceans globally through direct effects on the habitat and fauna as well as through synergies with other human activities. 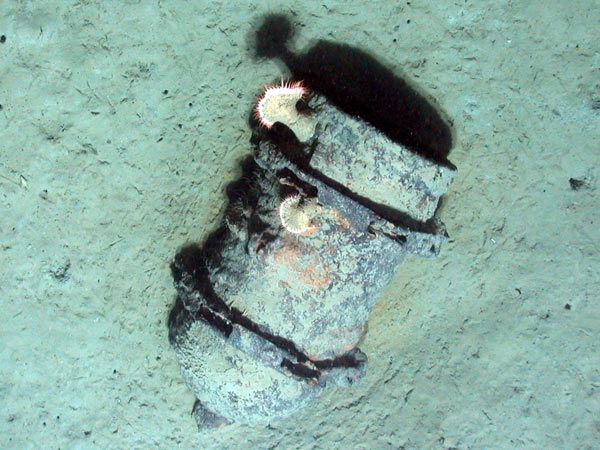 Unexploded ordinance on the seafloor in the Gulf of Mexico. Credit: Expedition to the Deep Slope 2007, NOAA-OE.

The deep-sea habitats most affected at present are: 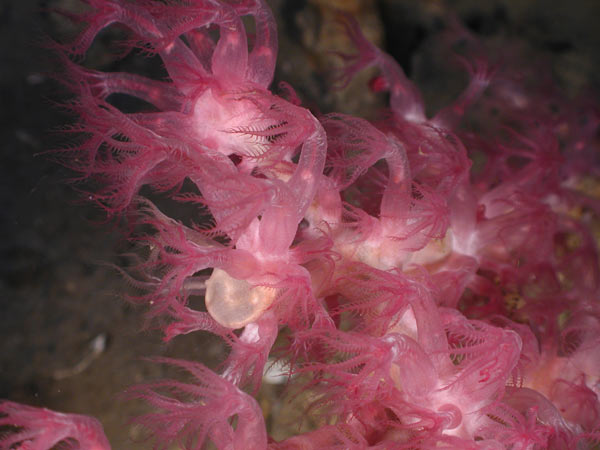 Macro image of tiny octocorals at 1,500meters/4,921 feet in the Gulf of Mexico depth. Credit: Courtesy of Aquapix and Expedition to the Deep Slope 2007, NOAA-OE.

They paper provides a valuable summary of protected deep-sea habits worldwide. And it describes the biggest hurdle in the life-cycle of any protected ocean area—the ability of slow-funded science to keep up with the big money of industry and development. Add bureaucratic foot-dragging into the mix and the race to protect the real value of the deep becomes even more lopsided.

They authors close with a call to arms, suggesting that human encroachment into the deep sea creates a new conservation imperative… and that effective stewardship will require continued exploration, basic scientific research, monitoring, and conservation measures—all at the same time.

Conservation in the deep sea offers challenges in the form of knowledge gaps, climate change uncertainties, shifting jurisdictions and significant enforcement difficulties. With time, technological advances can help address these challenges. It remains to be seen whether new approaches must be developed to conserve the biodiversity and ecosystem services we value in the deepest half of the planet. 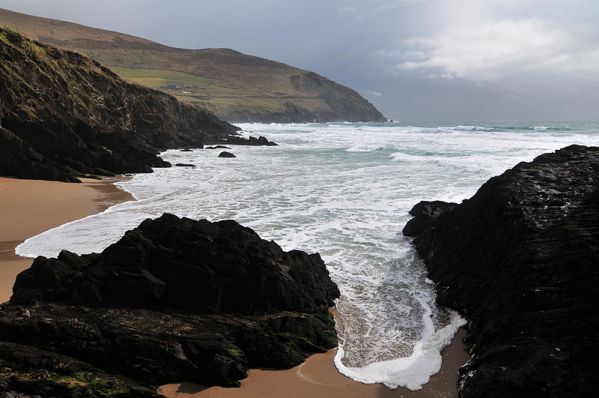