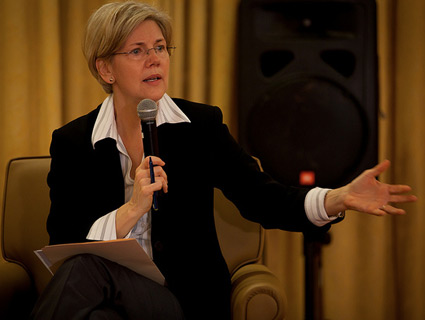 Elizabeth Warren has yet to officially declare whether she’ll challenge Sen. Scott Brown (R-Mass.) in 2012—but already Massachusetts Republicans are flinging mud in her direction and previewing their attack plan if she does jump into the race.

Since Warren formed an exploratory committee on August 18, Brown’s staff and the Massachusetts Republican Party have branded Warren a carpetbagger, an elitist, and a candidate too liberal to represent the Bay State. Using press releases, public statements, and even an anonymous Twitter account, GOPers have depicted Warren, a Harvard professor and middle-class champion who launched the Consumer Financial Protection Bureau, as a political nonentity and “another Martha Coakley.” The latter refers to the state’s Democratic attorney general who, despite greater name recognition and the advantage of running for a seat controlled by Democrats for more than 50 years, was upset by Brown in a 2010 special election to replace the late Ted Kennedy. “If the first few days of professor Warren’s campaign are any indicator, Massachusetts Democrats will soon be yearning for the golden days of Martha Coakley,” sniped Jennifer Nassour, a spokeswoman for the Massachusetts GOP in August.

Kevin Franck, a spokesman for the Massachusetts Democratic Party, says Republicans are attacking Warren to shift the debate away from Brown’s Senate record. Franck points to Brown’s votes to undercut the Dodd-Frank financial-reform bill, limit the power of the Environmental Protection Agency, and cut millions of dollars in funding for summer youth jobs programs in Massachusetts. “The reason that Scott Brown, his allies, and the Massachusetts Republican party is throwing mud all over the place is because they don’t want to talk about how Scott Brown’s been voting since he’s been in the US Senate,” Franck says.

To date, the most underhanded attacks on Warren have come from the @CrazyKhazei Twitter account, named after Massachusetts Democrat Alan Khazei, another 2012 Senate candidate. The phony account drew plenty of attention for mocking Khazei, but little mentioned was its barrage of criticism leveled at Warren. The user behind @CrazyKhazei would’ve remained anonymous had Eric Fehrnstrom, an aide to both Scott Brown and GOP presidential candidate Mitt Romney, not outed himself by accidentally tweeting a @CrazyKhazei-style tweet from his personal Twitter account. He later admitted to creating the account. (Fehrnstrom did not respond to a request for comment for this story.)

Fehrnstrom ripped Warren for being an out-of-towner—and also for being a “Cambridge-centric” elitist:

“Honestly, so far the only people I know who are excited about Elizabeth Warren live outside Massachusetts #mapoli #masen” (20 August 2011)

“@elizabethforma is not following anyone on twitter. Typical Harvard elitist. #mapoli #masen” (19 August 2011)

Now, some facts. Warren is no carpetbagger—she’s lived in Massachusetts for 17 years, and the Boston Globe named her “Bostonian of the Year” in 2009. Nor is she an elitist—she grew up in a family hit hard by the Oklahoma dust bowl and the Depression, and her work focuses on protecting consumers and improving the lot of middle-class families. Warren’s no Ivy League snob either—she taught at big public universities, including the University of Texas and the University of Michigan, before later landing at Harvard.

The Massachusetts Republican Party has attacked Warren early and often. Four days after Warren formed her exploratory committee, the state GOP blasted out a press release with the cheeky title “E.W. = M.C.2″—again comparing Warren to Coakley. The GOP bashed her for using “violent rhetoric,” citing a time when she said she either wanted a strong and independent consumer protection agency or “no agency at all and plenty of blood and teeth left on the floor.”

The GOP has slammed Warren for the supposedly “humiliating errors” of retaining Perkins Coie, a respected DC law firm that lobbies on a range of issues and often represents national Democratic candidates, to work on her exploratory committee, and also for hiring Gov. Deval Patrick’s former chief of staff, Doug Rubin, who previously lobbied for an influential gambling corporation. Two of the supposed errors, however, didn’t even involve Warren’s own actions.

Not that Warren isn’t used to partisan attacks. As the Obama administration adviser tasked with launching the Consumer Financial Protection Bureau, Warren often squared off against hostile congressional Republicans and, on one occasion, was even accused of lying to Congress by Rep. Patrick McHenry (R-N.C.). Warren’s time in Washington no doubt thickened her skin to the kind of attacks headed her way in Massachusetts.

Consider the GOP’s jabs at Warren a taste of what’s to come in what could be the most high-profile Senate race of 2012. What you won’t see is more mud from @CrazyKhazei. Fehrnstrom appears to have shut down the account after his role went public and Brown voiced his disapproval. Fehrnstrom, who has criticized others for their “in-the-gutter” tactics, was unapologetic: “As they say in politics, if you can’t stand the tweet, get out of the kitchen.”