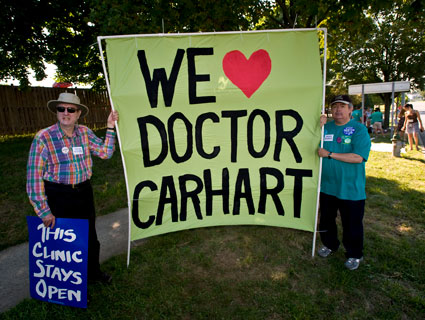 In 1991, thousands of protesters descended on the Wichita, Kansas, clinic of late-term abortion provider George Tiller, blocking his doors and those of two other local clinics and lying in the streets. Some 2,700 protesters were arrested over six weeks, and Tiller was forced to close his doors for a week. The protesters called it the “Summer of Mercy.”

Now, 20 years later, anti-abortion activists believe that God is “issuing a similar historic call.” Tiller is dead—he was murdered by an anti-abortion extremist in May 2009—and the clinic that was the focus of the protests two decades ago is now closed. So the “Summer of Mercy 2.0” is taking place here in Germantown, Maryland, where onetime Tiller assistant LeRoy Carhart provides late-term abortions at his clinic in a brown-sided, teal-trimmed suburban office park.

Germantown is less than an hour from Washington, DC. The anti-abortion groups organizing this year’s event believe that thousands of others will gather here by the end of the week. But when I arrived on Monday, I didn’t find the mass protest the Summer of Mercy website seemed to promise. There were maybe 50 people in attendance, praying and sweating in the 90-degree heat. Occasionally, a truck with a bloody image of what was supposed to be a fetus passed by, though organizers had discouraged participants from bringing “graphic signs to ‘officially scheduled’ Summer of Mercy events.” By 1:30 p.m., the larger group had dispersed, leaving only about eight protesters behind. Just down the street, about 15 abortion rights activists were holding signs and encouraging passers-by to honk.

The police kept a tight watch on the borders of the office park throughout the day. Protesters of all stripes were forbidden from leaving the public sidewalk or straying onto the complex’s grounds. Inside, though, Carhart’s office was empty. Rather than force patients to pass through the demonstration en route to his office, Carhart had decided to close the office for the week. “He just made the decision it wasn’t safe,” said Kira Lynn Baughman, director of community outreach for Carhart. “Dr. Carhart puts women first, puts his patients first. He didn’t think they should be exposed to that.” She said he still plans to see patients this week, but at a different location.

Some anti-abortion protesters argued that Carhart’s decision to avoid Germantown for the week was a victory in and of itself. “We have succeeded in a way by Carhart closing this week,” said Chris Slattery, the founder of the anti-abortion counseling center Expectant Mother Care of New York City. “Perhaps some abortions have been prevented.”

Troy Newman, the head of the controversial anti-abortion group Operation Rescue, which led the first “Summer of Mercy,” said Carhart’s move might convince the protesters to stay even longer. “Okay, we’ll just stick around another week,” Newman told me by phone Monday afternoon. “To us, men and women of faith, this is an answer to prayer.” Then he told me about the live sonograms, of fetuses at 19 and 23 weeks, that he said they’d projected on big screens at a church near Carhart’s clinic on Sunday night.

Ideally, the anti-abortion protesters would like to see the second Summer of Mercy have the same kind of impact the first one did. But even Newman acknowledged that times have changed. These days, anti-abortion activists can face federal prosecution for trespassing at a clinic. But more importantly, he said, his group no longer needs the tactics that led to so many arrests 20 years ago. In recent years, anti-abortion groups have been wildly successful in electing anti-abortion politicians in a number of states, and those legislators have passed a record number of laws reducing access to abortion.

“Tactics change, principles do not,” Newman said. Today, he said, the anti-abortion movement focuses “more on education…with graphic images of aborted children, and changing the laws.” But Operation Rescue and other groups will still target a clinic like Carhart’s, Newman said, because they see them as “low-lying fruit,” given public discomfort with later-term abortions. Tiller’s murder, by contrast, hasn’t changed Operation Rescue’s tactics at all, Newman said. “My approach never changed,” he said, adding, though, that his “sensitivity to the safety of abortion providers…was heightened.”

Abortion rights fans also made a showing at the clinic in support of Carhart. On Sunday, organizers from the National Organization for Women, Feminist Majority, the Religious Coalition for Reproductive Choice, and other allied groups turned out for a “Summer of Choice” march outside the office park. Others planned to have a presence throughout the day all week, from 7:30 a.m. to 9 p.m., and were out holding signs Monday afternoon. Among them was Kari Ann Rinker, the Kansas state coordinator for the National Organization for Women and a veteran of the abortion debates in a state where the battle has been particularly fierce. Rinker, 39, remembers the first “Summer of Mercy,” which happened shortly after she moved to Wichita. “I know that a strong showing of support for physicians is vital for this movement,” she said.

Tiller first closed his clinic at the beginning of the protests in the summer of 1991 amid the escalating protests, Rinker recalled, though he later reopened. She worries that closing “emboldened” the activists, drawing out more at time went by. In the Maryland events, she said, “I don’t see that they have the momentum that they had back in the day.” But she worries that Carhart’s decision to close his office for the week might have that same impact—further empowering the same foes who pursued Tiller for so long.

“They turned their sights on Dr. Carhart when Dr. Tiller’s body was still warm,” Rinker said.