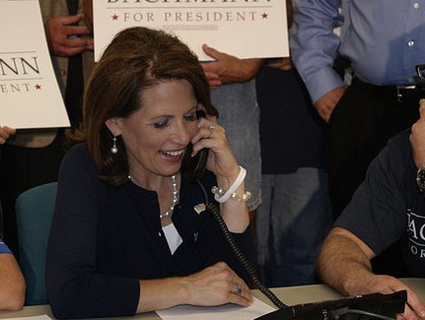 It’s a reasonable bet that International Baccalaureate, the international advanced placement system for high school students, will not be much of an issue in the Republican presidential race. But you never know.

As I reported this morning, International Baccalaureate actually plays a supporting role in a conspiracy theory hawked by Rep. Michele Bachmann (R-Minn.) and many of her boosters back in Minnesota—one that helped kick-start her career when she was a home-school parent in Stillwater. Bachmann got her start in politics in the late 1990s by partnering with a group called the the Maple River Education Coalition to warn Minnesotans about the imminent “state-planned economy” that would turn the state into a mini-Soviet Union. MREC believed, absolutely, that the federal government was in league with the United Nations to create a new global order built on an ideology of radical environmentalism (which is what led then-Gov. Jesse Ventura, no stranger to conspiracy theories, to jest that they “think UFOs are landing next month”). As these conservatives saw it, “sustainability,” and more specifically a little-known United Nations agreement called Agenda 21, was the catalyst for a globalist takeover.

What does this have to do with International Baccalaureate? Well, if your goal is to bring the world together under one banner, it obviously helps to indoctrinate the children. These right-wing critics argued that IBO was quietly weaning kids off the antiquated notion of national sovereignty and American ideals and pushing them to become world citizens. (This, among other reasons, is why conservatives were so irked by Obama’s statement that he considers himself a “citizen of the world”). IBO students would be taught to revere the United Nations Declaration of Human Rights and embrace a doctrine of moral relativsm that values gay rights, redistribution of wealth, and the notion that the earth itself is a living organism (think Avatar, I guess).

Bachmann has been silent on the International Baccalaureate part of the conspriacy. But in 2006, then-EdWatch president Julie Quist did testify before Bachmann’s state senate education committee to urge the body to strip all funding for IBO programs. As she explained:

All ten amendments—even the Third! World citizenship, anyhow, is not literally a thing that’s in competition with national citizenship, inasmuch as it is impossible to get a “world passport” or pay “world taxes” or vote for a “world president” or compete on the world Olympic team. But a few weeks later, Quist and EdWatch showed up at the GOP nominating convention for the Sixth Congressional District. Bachmann won the nomination with their help, but there was another order of business for the group: They also pushed through a resolution formally opposing IBO. (Minnesota’s governor, Tim Pawlenty, supported the program.) Quist and another EdWatch alum, Renee Doyle, went on to take jobs in Bachann’s congressional office.

Bachmann frames her education activism and work with Maple River Education Coalition as that of a concerned parent who was worried schools were dumbing down her kids. But the actual fears that she and her allies outlined at the time went much, much deeper than that. For some more thoughts on Bachmann’s early career—and why conservatives don’t seem to care—read Noah Kristula-Green.