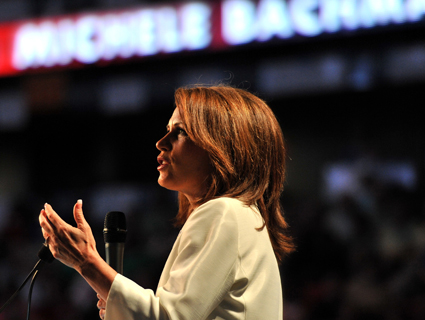 On the campaign trail in Iowa, Rep. Michele Bachmann’s response to the argument that she lacks the experience to run for president has been to turn the argument on its head. The Minnesota congresswoman rattles off her resume: She was a federal tax litigation attorney; she and her husband started “a successful small company“; she fought the establishment in the state Legislature and Congress.

And one more thing: Lest you think she doesn’t have the brains to do battle with Obama, she rattles off her degrees. “I’m not only a lawyer, I have a postdoctorate degree in federal tax law from William and Mary,” she told Fox News’ Chris Wallace in June. “I work in serious scholarship.”

But there was one résumé item that was missing: a Ph.D. Back in the late 1990s and early 2000s, when Bachmann traveled the state as an education activist, she went by “Dr. Michele Bachmann,” even though she had never obtained nor sought the advanced degree that’s a prerequisite for the title.

Bachmann’s Backstory:
Read Tim Murphy on Bachmann’s early years as an education activist; her 2002 film warning that curriculum standards were leading Minnesota down the road to Auschwitz; the roots of her crusade to save incandsecent light bulbs; and, from the magazine, the full story on why Bachmann’s political rise was no accident.

From 1998 through 2003, Bachmann was a leading opponent of a Minnesota curriculum standard called the Profile of Learning. She and her allies believed that it was leading Minnesota toward a state-planned economy; if we weren’t careful, totalitarianism (or worse) could be just around the corner. “Government is implementing policies that will lead to poverty, not prosperity, by adopting the failed ideas of a state-planned and managed economy similar to that of the former Soviet Union,” she explained in a policy paper she cowrote for an anti-Profile nonprofit called the Maple River Education Coalition (MREC). “The system is based upon a utilitarian worldview that measures human value only in terms of productive capability for the ‘best interests of the state.'”

Along with a local education activist named Michael Chapman, she toured the state and the nation to drum up opposition to state and federal education standards. And according to eyewitness accounts and material put out by the group, she picked up an advanced degree along the way.

Mary Cecconi, a Minnesota education lobbyist who handed Bachmann her only defeat in a 1999 Stillwater school board race, recalls seeing the future presidential candidate speak at an area church shortly after that election. “Chapman was supposed to be the headliner, but there was no question that she was the star,” she said. “He was supposed to be the researcher. She was supposed to be the one who focused on the legal aspect—actually that was the first time I’d ever heard someone with a J.D. called a ‘doctor.'” Bachmann’s 2002 anti-Profile film, Guinea Pig Kids, likewise twice identified the then-state senator as “Dr. Michele Bachmann.”

And in 2000, when Bachmann knocked off incumbent GOP state Sen. Gary Laidig at the district nominating convention, the MREC fired off a news release repeatedly invoking their candidate’s honorarium. “On the first ballot, Dr. Michele Bachmann was endorsed 62% to Laidig’s 38%,” it read. “Dr. Bachmann herself, who arrived at her convention with no intention of running, was shocked by her victory.” (The narrative, promoted by the congresswoman, that she was an unlikely candidate is false—Bachmann had announced her candidacy months earlier and laid the groundwork for the upset by stacking the convention with anti-Profile activists.)

“Dr. Bachmann” might have given the activist a bit more gravitas, but it was not an appropriate title. Bachmann received a J.D.—the standard law school degree—from Oral Roberts University, and an LL.M. in tax law from William & Mary in 1988. The LL.M. does count as a postdoctoral degree, as Bachmann says, because it came after she had received a “terminal degree”—that is, a degree that can’t be directly improved upon. But while J.D. (juris doctor) has the word “doctor” in it, it is not accepted practice for J.D.’s to refer to themselves as “Dr.”

For basic law school graduates like Bachmann, “‘Esquire’ is the preferred term,” says James Warren, an assistant in the dean’s office at UCLA Law School. Nor does doing postdoctoral research bring with it any extra titles. “It’s not like you’ve received another degree—it’s like a fellowship,” explains Zoe Fonseca-Kelly, chair of the board of directors of the National Postdoctoral Association. Rather, postdocs revert to whatever degree they had previously earned once they’ve finished their research.

This isn’t the only instance of Bachmann exaggerating her résumé. She continues to call herself a “tax attorney” or “tax litigation attorney” even though, according to the state of Minnesota, she is not currently authorized to practice law in the state. In an effort to prove her bipartisan appeal, she has stated that Minnesota Democrats squeezed her out of her old Senate district and put her in a new, liberal-leaning one—but the districts were drawn up by the courts, and her new district actually leaned red.

On occasion, she has also stretched the truth about her foster children (she had 23) to make a political point. In a 2008 interview with Politico, she noted that she was feeling the squeeze from high gas prices because she has such a large family. “Energy will be the big focus right now,” she said. “Every weekend now when I go home, I will go to the grocery store, I’ll buy food for the family. We have five kids and 23 foster kids that we raise. So I go to the grocery store and buy a lot of food.” The catch? She didn’t have any foster children in 2008; her permit to take in foster children had expired in 2000 and she had taken in her last child, a teenage girl, in 1998.

Bachmann’s campaign did not respond to a request for comment.

Update: A reader writes in to argue that “Dr.” actually is an appropriate term for a J.D. recipient. As it turns out, there’s a bit of a debate on this point within the legal community—it is a (begrudgingly) accepted practice in some states and not in others. But the fact that it’s technically accepted does not mean anyone uses it. Chief among the reasons lawyers don’t use “Dr.” is that to most of the public, the terms suggests that you’re a medical doctor or a Ph.D.—and therefore conveys a false level of expertise. Bachmann selectively used the title when she talking about education policy, a subject she had studied informally but had no advanced degree in.