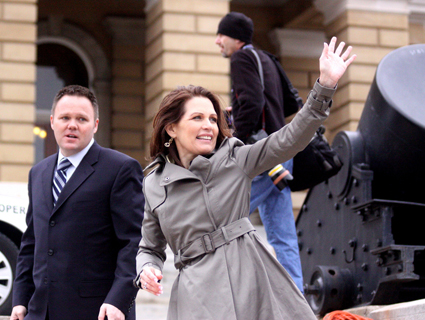 The clearest sign yet that Michele Bachmann is not running a typical campaign for the presidency came at the end of her address Sunday night at the Black Hawk County GOP’s Lincoln Day Dinner in Waterloo, Iowa. Speaking in her hometown, and taking the stage minutes after her newest, biggest competitor in the race, Texas Gov. Rick Perry, Bachmann had a surprise planned to celebrate her victory at the Ames Straw Poll.

“One thing I learned when I was little was if you come to say thank you to someone, it’s a good idea if you can give them something,” she said. “Have you ever been to Machine Shed restaurant? Well, I went to Machine Shed restaurant on my way here today, and I thought there is nothing more American than apple pie. And I brought the biggest, baddest, deepest apple pie that I could for you tonight.”

Apple pie had already been served for dessert, which Bachmann missed because she showed up late and waited in the parking lot until Perry’s speech was finished. But never mind that; she had the floor and she was rolling now. “I remember when I was a little girl at the mother-daughter banquet over at First Lutheran Church, one thing they’d always do, they’d put a piece of masking tape under a folding chair and then they’d look under your chair to see who wins the prize,” she said. “Soooo—tonight this is how we’re going to do it: I would like to give this apple pie to the oldest—if you don’t mind—Republican mother in the room. So let’s see, do we have anybody who’s over 39?”

When it was all over, two standing ovations later, a 100-year-old Republican mother named Mary had come home with the biggest, baddest, deepest apple pie in Waterloo and the audience that had been so smitten with Perry moments earlier was reminded of what had made Bachmann such a political force in the first place. And Bachmann had one last treat for the crowd. “I’ve got some Sharpie pens,” she said. “So if any of you are here and want some T-shirts and some autographs, I’d be more than happy to give them to you.”

Politicians do not normally end campaign events by giving away prizes, daytime television-style, or inviting attendees to come up to the stage and ask them for their signature. That kind of thing tends to make you look like a celebrity, and “celebrity” is a dirty word among politicians, second only, perhaps, to “politician.” Witness this memorable John McCain spot from 2008:

As Dave Weigel pointed out in Slate on Monday, though, celebrity has become the defining element of Bachmann’s campaign in Iowa so far.

Bachmann’s “Meet Me in Ames” tour was more like the blitz you see before an election. Over one week in Iowa, before the straw poll, I saw her speak five times. A stage was set up outside, where cameras could get good, sun-bleached shots. Voters were urged to stand close to the stage or behind it—also for good shots. As “Promised Land” played, Bachmann’s bus came into view; during the second playing she exited it. She spoke for roughly 20 minutes. When her speech ended, she stayed on the stage to shake hands, sign autographs, and get buttonholed in very short “thank-you-for-what-you’re-doing” conversations. Only once did I see her break the format, with a town hall meeting on Monday that featured five audience questions.

Likewise, when I waited for an hour along with more than 100 others at the Iowa State Fair to hear Bachmann speak on Friday, she showed up 30 minutes late, spoke for four minutes (out of the allotted 30), and left in a mob of state troopers, press, and campaign staffers. All of that speaks to just how tightly Bachmann’s handlers are managing all aspects of her candidate’s image—stonewalling on unfavorable questions and turning her events into miniature rock shows (she entered the Electric Ballroom with Elvis blaring in the background and insisted that the lights be changed before she would come on stage). That might not be a terrible strategy; if the number of supporters who left bearing autographed blue T-shirts was any indication, the “celebrity” tag is part of Bachmann’s appeal.

Back in Waterloo, Bachmann finished off her night with a quick press conference, which, it turned out, was mostly an excuse for the candidate to get a few more quick photos of her holding a copy of Sunday’s Waterloo Courier, her Ames victory splashed across the front page. In case anyone had forgotten, she announced her name and current occupation—”My name’s Michele Bachmann, and I’m running for president”—and took three quick questions from preselected reporters. Then she stood on the steps of the bus, holding up the newspaper triumphantly once more, just as she had done on stage at the beginning of her speech, and spoke as if the gaggle of flip-cams and boom mikes and pens-and-pads were just another fawning audience holding out for some red meat.

“Thank you! Thank you!” she said, and vanished into the bus.