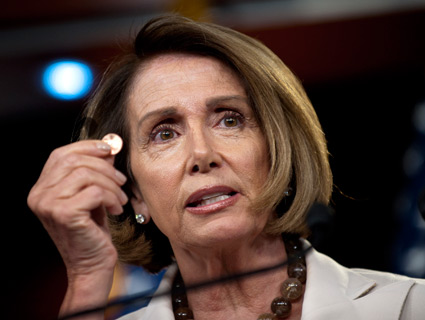 When the voting began on the controversial—and ugly—debt ceiling bill in the House of Representatives on Monday, Rep. Nancy Pelosi (D-Calif.), the Democratic leader, did not know how many votes House Speaker John Boehner (R-Ohio) had for the measure that had been crafted by President Barack Obama and the Republicans. Boehner had not reached out to her to make certain that the crucial legislation designed to prevent a potentially disastrous US default would be approved. When Boehner “went to the table”—brought the bill to a vote—he “had no idea” how many votes he had, Pelosi says.

Want to learn more about the debt ceiling fight? Read the editors on the real problem with John Boehner, review our detailed, updated explainer on how we got to this point, and learn why Kevin Drum thinks the deal sucks. Still hungry? David Corn has a great story on the Obama administration’s political strategy.

The speaker, as it turned out, did not have enough Republican votes to pass the bill—only 174—and he had made no arrangement to guarantee its success. When there were minutes left for the vote, and it became apparent that Boehner would fall far short of the 216 votes necessary for passage, Pelosi’s Democrats began voting in favor of the measure. “We were not going to let it go down,” she told a small group of journalists on Wednesday morning.

In past years, a House speaker and the leader of the opposition would probably confer before such a crucial vote and figure out how to move the legislation through the chamber. (Boehner and Pelosi both were supporting this bill, albeit Pelosi quite reluctantly.)  And many outside observers assumed that Boehner and Pelosi had indeed convened prior to this vote, that a conversation such as this had occurred: Nancy, I can get up to 170 or so votes, but not all those tea party guys. John, I can tell you that at least 50 Democrats are going to hold their noses and vote for this stinker. Yet when the final dramatic vote arrived, Pelosi was surprised that Boehner was so short of the magic 216. “When they didn’t come to us for votes,” Pelosi recalls, “we thought they had the votes on their own.”

But Boehner didn’t. So the Democrats, having waited to see how many Republicans would back the measure, started filling in the gap. Pelosi didn’t have to send any signal. Her Democrats, she says, are a “sophisticated” group, and they could see that without Democratic support the bill would fail.

In a routine situation, if the House speaker were to bring a bill to the floor and only obtain 174 votes of his or her own party, he or she would pull the legislation and then talk to the other side, which would expect concessions or sweeteners in return for the votes necessary to assemble a majority. In this case, Pelosi maintains, there was no time for further bargaining. The measure had to be approved and kicked over to the Senate, for the possibility of default loomed. “I don’t know nobody [in the Democratic caucus] who wanted to vote for it,” Pelosi notes. But Democrats were committed to forestalling default. In the end, half of her caucus supported the measure, far more than necessary to put it over the top.

Rep. Barney Frank (D-Mass.) was one Democrat who voted against the measure, which mandates deep cuts in discretionary spending and sets up a commission to propose further cuts (and possibly revenue hikes). He argued that the legislation was a lousy deal and could lead to significant cuts in programs crucial to low- and middle-income Americans, without imposing any burdens on the well-to-do. If the Democrats were to balk and vote against it, he contended at the time, Congress would be forced to pass quickly a measure that would raise the debt ceiling (and prevent default) for at least a short period of time. Why didn’t Pelosi, who hardly fancied this debt measure, adopt such a course? Frank, she says, was “probably conveying” his own sense of decency upon others—meaning he was granting GOPers the benefit of the doubt, and Pelosi didn’t trust the Republicans to forestall default by agreeing to a temporary measure. Default, she notes, “would have been terrible,” and blame for it would have landed at the doorsteps of Obama and the Republicans.

So to prevent default, Pelosi held her nose and halfheartedly encouraged fellow Democrats to vote for legislation that she insists will “deter economic growth.” This fight, she adds, was not propelled by Republican concern for deficit reduction; it was “about destroying the public space”—that is, the tea party’s desire to weaken government. And this battle, she concedes, has reinforced the Republicans’ economic message: “Debt is everything.” It has demonstrated that the tea party has succeeded, as she puts it, in changing the “arena.”

But as with any politician who has lost a major battle, Pelosi advises that it’s time to move on and for Democrats to push a message of job creation, as Obama started doing minutes after signing the debt bill on Tuesday. She notes that when she used to take her kids on family trips, there was a family tradition. As the Pelosis left San Francisco, crossing one of the city’s bridges, the family would throw their troubles of the moment off the bridge—and proceed. That’s what she’d like to do now. “Every day we talk about this and we’re not talking about jobs,” she says, “it plays into the hands of the Republicans.” But with the GOP hostage-takers having succeeded in hijacking the debt ceiling debate to advance their fierce anti-government ideology of austerity, they are likely to attempt similar tactics in subsequent tax and budget debates. And the trouble is, there are other bridges to cross in the weeks and months ahead.