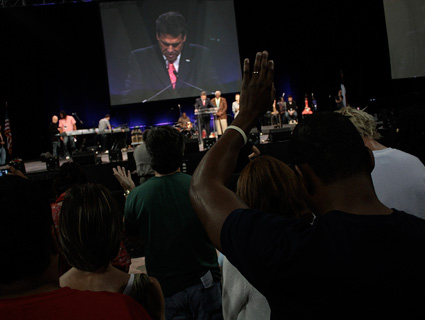 Speaking from a temporary pulpit to more than 30,000 people, Texas Gov. Rick Perry emphasized that there were no political motives behind his presence at The Response, the huge evangelical revival meeting that drew some of the most high-profile figures in American evangelical Christianity to Houston’s Reliant Stadium on Saturday. At an event that was characterized throughout the day as a turning point, a crossroads—the moment at which a sinful nation would once again realize the promise of redemption through Jesus Christ—one speaker declared that Saturday marked the beginning of a Third Great Awakening. America’s “God-sized problems,” as Richard Land of the Southern Baptist Convention described them, seemed, to these worshippers, on the verge of finally being addressed.

“Father, our heart breaks for America,” Perry said, as attendees raised their hands to the sky. “We see discord at home. We see fear in the marketplace. We see anger in the halls of government. And as a nation, we have forgotten who made us, who protects us, who blesses us, and for that we cry out for your forgiveness.”

But The Response, Perry insisted, was entirely apolitical. The preponderance of Republican elected officials on hand, including Gov. Sam Brownback of Kansas and Rep. Louie Gohmert of Texas, meant nothing; God transcends partisanship. “His agenda is not a political agenda; his agenda is a salvation agenda,” Perry said. Eric Bearse, spokesman for The Response, reiterated this logic in so many words to reporters: “The people I’ve talked to, they’re not here about anything related to politics. They’re here for a spiritual experience.”

Later, in a stadium hallway, I ran into Bryan Fischer, the most visible figure of the American Family Association, which underwrote the prayer fest. Republican presidential candidates Michele Bachmann, Newt Gingrich, and Tim Pawlenty have appeared on Fischer’s radio program, where they’ve attempted to portray themselves in a favorable light before an audience of strident evangelicals. (Pawlenty, for instance, asserted on Fischer’s program that Don’t Ask, Don’t Tell should be reinstated.) I asked whether Fischer agreed with Perry’s claim that The Response was to be understood as strictly “apolitical.”

But how can that be so, I responded, when the event is being held by the sitting governor—a prospective presidential candidate—and when a band onstage had just sung a rousing rendition of a song with the refrain “Jesus, I need your love over my sin and the sins of my nation/End abortion and send revival to America”?

“There’s no separation between God and government in American public policy,” Fischer clarified. “Never has been, never should be.”

Perry and his spokespeople view The Response as an apolitical event only insofar as there is no inherent difference between political and religious events to begin with.

“Well,” he paused, smiling. “It’s a spiritual event.” Here, Fischer articulated a distinction that was consciously elided by Perry and his spokespeople: They view The Response as an apolitical event only insofar as there is no inherent difference between political and religious events to begin with. Fischer claimed that this premise has longstanding precedent in American history. The organizers of The Response are acting from the same impulse as the Founding Fathers did, he said, when they initiated the Continental Congress. “The entire political system of the United States was built on the religious foundation that there was a creator, with a capital C,” Fischer went on. “And that creator is the source of all our human rights. You can’t get any more political and religious than that.” Even John Jay, the nation’s first chief justice, thought that a Christian nation should select Christian leaders for elected office, Fischer said.

“But isn’t our current president a Christian?” I asked.

“Claims to be,” Fischer replied. “He shows far more deference to the Muslim faith than he does to the Christian faith.”

“Iftar dinners in the White House.”

“Well, he has Jewish dinners, he has Christian dinners,” I said. “You know, all sorts of interfaith events and acknowledgments.”

“He issued a proclamation for Ramadan this year, and did not issue a proclamation for Easter,” Fischer said, satisfied that he had provided ample evidence for the insinuation that Obama is probably a Muslim. At least they had an Easter egg hunt, I added. Fischer laughed.

He’s never met Perry, but Fischer speculated that his personal faith was strong. “I think it’s genuine, it’s authentic,” he said. “I think from an evangelical standpoint, he’s the real deal.”

I moved on. Joshua Critchfield came to The Response on one of eight 45-person buses that left from Cornerstone Church in San Antonio, home to the notorious pastor John Hagee, who addressed the crowd on Saturday. Critchfield works in the mortgage unit of the USAA, which provides financial services to military personnel. I asked if he viewed The Response as a political event. “Yeah,” Critchfield said.

“Because of what our government’s doing to the world,” he explained. “Our government’s putting their nose in stuff that’s not even supposed to be their business. And we’re getting involved in things that we shouldn’t be getting involved in. Because of that, we’re creating uproar with other religions, and everything else. It’s just creating chaos.”

How can this sad state of affairs be rectified? I ask.

“I’m hoping that maybe with what this event brings to our community and our society,” said one supporter, “that it’ll actually change our country, because Obama’s not doing it.”

“I think government needs to get its head out of its rear and start trusting in the Lord,” Critchfield said. “It needs to start putting the Lord first.” And Perry, he hoped, would steer the nation in a more Christlike direction. “That’s another reason why I’m here,” he said. “I want to hear what he has to say. I’m hoping that maybe with what this event brings to our community and our society, that it’ll actually change our country, because Obama’s not doing it.”

Jack Clayton, a Response volunteer from the Houston area, also saw nothing inappropriate with Perry’s involvement. “The Lord can use people in high offices to call the nation back to prayer,” he said. “I’m glad to see officials engaged, especially when you have one person that says this isn’t a Christian nation—I’m not going to say who that is.”

I asked what sorts of things could be done to lift the country out of its spiritual infirmity. “I believe getting Jesus back into America, back into the schools, back into our homes, back into the government—state, federal—will do it,” he said. “I think having meetings like this, and inviting Jesus into our lives, and having a moral relationship with the Lord as a friend—not just on Sundays but all through the week—will do it.”

Perry’s spokesperson told me that the governor had not decided until midweek what role would be best for him to play at The Response. There was speculation that he might not speak. But by Saturday, any doubts about his commitment to a new Christian America could be disregarded. He was all in. Whereas George W. Bush sought and won the support of extreme Christian elements, he was not as linked to them as Perry. Bush ascended from a privileged background, mostly bypassing grassroots-level alliance-making with these groups, whereas Perry, who rose from humbler beginnings, is leaning on them to propel him to the Republican presidential nomination.

“As we go out of this place,” Perry said to close the proceedings, “I hope you’ll continue to pray for our nation and our leaders, for our president, for all those elected officials—that God will pour out his wisdom upon them.” For an event at which politics were purportedly shunned, many in attendance reached the conclusion that only political action would suffice for remedying the nation’s ills. And for many, that solution would come in the form of a certain pious governor.