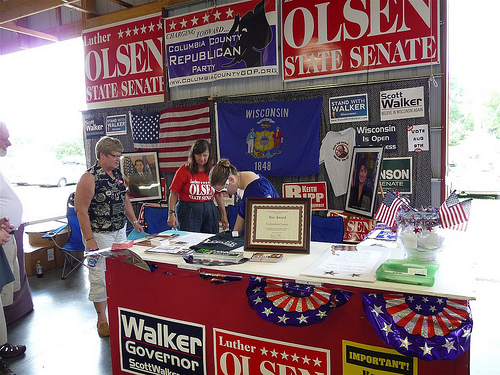 GOP State Sen. Luther Olsen campaigns at the Columbia County Fair as he fights to defend his seat from a recall attempt against Democratic Rep. Fred Clark in Wisconsin's 14th Senate District. <a href="http://www.flickr.com/photos/wispolitics/5988133288/sizes/m/in/photostream/">WisPolitics.com/Flickr

It’s not only right-wing political groups, like the cash-flush, Koch-backed Americans for Prosperity that are deploying resources to help Republican state senators in Wisconsin prevail in their upcoming recall elections. The evangelical right is lending its muscle to the GOP to protect the six Republican lawmakers against their Democratic challengers.

As Washington Post‘s Greg Sargent reports, various pro-life and anti-gay rights groups are throwing cash and manpower at the Wisconsin recalls to prevent Democrats from seizing control of the state senate. (Democrats must net three seats this summer to gain the majority.) These aren’t middling organizations, either: Ralph Reed’s Faith and Freedom Coalition (FFC), a national evangelical group, is deploying volunteers to the Badger State to support the besieged Republican senators. From a July 20 FFC blog post:

The Wisconsin Faith & Freedom Coalition will work to get out the vote the old fashion way, by talking with Wisconsin voters through burning up the shoe leather in door-to-door canvassing across key neighborhoods in senate districts from Milwaukee to Madison. Then, before Election Day on August 9th, we will initiate a full-scale get-out-the-vote phone bank operation to make sure every last pro-freedom and pro-family voter goes to vote on behalf of our values.

Wisconsin Faith & Freedom Chairman, Tony Nasvik, has worked to organize this effort and has said, “General Patton’s rapid advance across the deserts of North Africa or the open fields of Eastern France were not possible without reinforcements. The recall spectacle in Wisconsin is nearing its conclusion in this all-out battle for the State Senate. This recall has been a pitched fight between the public (and in some cases private) unions from all over the country, while most of the ground campaign on the conservative side has been locally supported.”

Here’s more on the right-wing mobilization from Sargent:

Susan Armacost, the legislative director for Wisconsin Right to Life, tells me that the group is involved in the recall wars because Planned Parenthood is active, too—and said that keeping the state senate in GOP hands would be better for the anti-abortion cause.

That’s because anti-abortion forces in Wisconsin are pushing the state to opt out of Federally funded abortions as part of the exchanges set up under the Affordable Care Act. The group is also pushing a state-level measure that would more strictly regulate abortion.

National groups are involved, too. Here is a flyer—sent over by the labor-backed We Are Wisconsin—that’s being distributed by Ralph Reed’s Faith and Freedom Coalition, urging a vote against Fred Clark, the Dem recall challenger to vulnerable GOP state senator Luther Olsen: 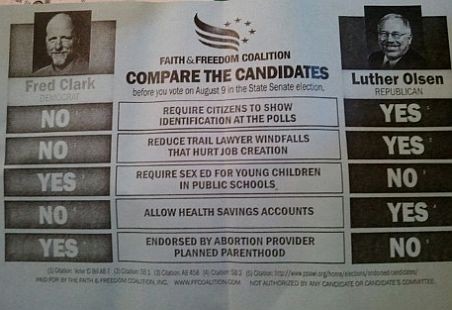 The remaining recall elections in Wisconsin—targeting six GOP incumbents on August 9 and two Democratic incumbents a week later—are quickly shaping up to be a national political battle. Barring a recall of Republican Governor Scott Walker, they’re the final chapter in this year’s tempestuous battle over union rights in Wisconsin. Walker’s budget bill may have prevailed, but Democrats could have the last word if they reclaim the senate and throw a wrench into Walker’s future legislative plans.