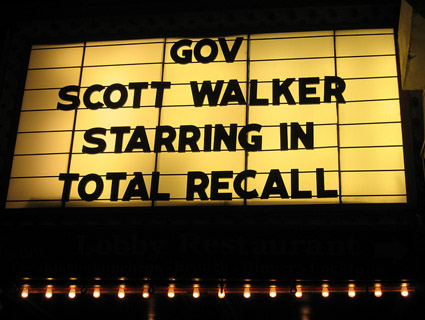 No amount of Wisconsin’s finest craft-brewed beer could lighten the mood at Hawk’s bar on Tuesday night as the final recall election results dribbled in. Democrats had won two seats, one short of what they needed to retake the GOP-controlled state Senate. Boisterous, confident, even costume-clad Democratic supporters had piled into Hawk’s to watch MSNBC’s coverage of the six races, but by night’s end, the feeling was one of disappointment, with plenty of tears to go around. “We need to go home and wallow in self-pity now,” one woman said on her way out.

Right then, a simple question hung heavy in the room: What now? Talking to people in Wisconsin in the days before the election; seeing the massive get-out-the-vote effort mounted by activists, labor unions, and the state Democratic Party; and watching the thousands of volunteers manning phone banks and knocking on doors made Tuesday’s recall elections feel like a make-or-break moment for the movement sparked by this winter’s protests in Madison. At close range, the sheer energy was staggering. Can that energy survive now? And if so, for what end will it be used next?

Scot Ross, the executive director of One Wisconsin Now, a left-leaning communications group, described the future of Wisconsin’s young progressive movement with a metaphor any Wisconsinite could love: football. Right now the movement is at halftime, Ross says. The first quarter was gathering more than 180,000 signatures to trigger Tuesday’s recalls. The second was the recalls themselves, and Ross says those succeeded in their aim: “holding the Walker Six accountable.” The third quarter is next week’s recall of two Democratic state senators. And the fourth? “That’s when we’re going to recall Governor Walker next year and restore decency, fairness, and common sense to this state,” Ross says.

Ross isn’t the only one advocating for Walker’s recall, even in light of Tuesday’s deflating results. On Wednesday, Mike Tate, the chair of the Democratic Party of Wisconsin, pointed to Tuesday’s results as evidence of the governor’s vulnerability in a recall election. “The historic gains made tonight to restore balance and accountability to our state, and [to] restore Wisconsin values, will continue when the entire state weighs in on the November 2012 elections—and with the recall of Scott Walker himself,” Tate said in a memo to reporters. For his part, Walker has said he doesn’t think Wisconsinites support holding any more recalls.

Technically, Walker cannot be recalled until after January 2012, and Ross says it remains unclear what the strategy for recalling Walker will look like. But Ross is confident that as the full force of Walker’s budget bills and other policies comes into focus in the coming year, Wisconsinites will come together to demand the governor’s ouster. “Once the impact of the decisions that they have rammed through are fully realized, that’s going to create a new wave of outrage that’s going to make what happened this past seem like an opening act,” he says.

Recalling Walker is just one of the plans on the minds of the grassroots activists who have found their voice in Wisconsin’s labor uprising. Many of these diehards united under the #wiunion Twitter hashtag, and when they introduce themselves they often use their Twitter handles. On Wednesday, a group of activists who call themselves the Democracy Addicts met at a Milwaukee bar to discuss how to ensure that Democrats don’t fall short in the next important election.

Ed Knutson, a Milwaukee resident, is one of the Democracy Addicts. While Knutson optimistically predicted Democrats would sweep all six races on Tuesday, he says he still considers two wins an important step, especially if the Democratic incumbents defend their seats on August 16. That would leave a single moderate state senator, Republican Dale Schulz, as the deciding vote in the state Senate. (Schulz was the only GOPer to vote against Walker’s budget bill.) Knutson says the Democracy Addicts will try to nudge Schultz away from the GOP rank-and-file who are carrying out Walker’s agenda in the state Legislature.

The Democracy Addicts don’t just want to sway politics the usual way, Knutson says. They saw the left’s staggering GOTV push fall just short in this week’s recalls, and they don’t want that to happen again. So they’re also talking with grassroots groups in Europe and thinking hard about how to organize Wisconsin voters more effectively. “We’ve got a lot more time with a Walker recall,” Knutson says. “We’re trying to figure some other way of organizing to get out the vote that’s a bit less traditional.”

An official with a national union says organized labor plans to build on the events in Wisconsin by trying to create a nationwide movement pitting the working and middle classes against the wealthy—Main Street against Wall Street. Doing that after Tuesday will prove a tall order, the official concedes, but he adds that at a time of chronic unemployment, flat-lining wages for most Americans, and a fraying safety net, the message that has animated Wisconsin is the same message the rest of the nation wants to hear: “Our message is resonating on Main Street,” he says. “But it needs to resonate on Pennsylvania Avenue.”

Robert Kraig, executive director of Citizen Action of Wisconsin, a progressive advocacy outfit, says Tuesday’s disappointing results—and possibly another loss or two next week—are the first real test of the movement born this in the snowy streets of Madison this winter. Now progressives have to choose whether to double down or pack it in and go home, Kraig says. The key, he adds, is finding the next outlet for all the energy seen in this week’s recalls, and not letting that passion and commitment dissipate. “One of the things that attracted everyone to the Wisconsin story is that…it’s about really sparking a movement to restore economic opportunity and fight back in the class warfare waged by the right wing and corporations,” Kraig says. “If this really is a movement, there’s going to be bumps in the road, but it can’t be about just this one election.”