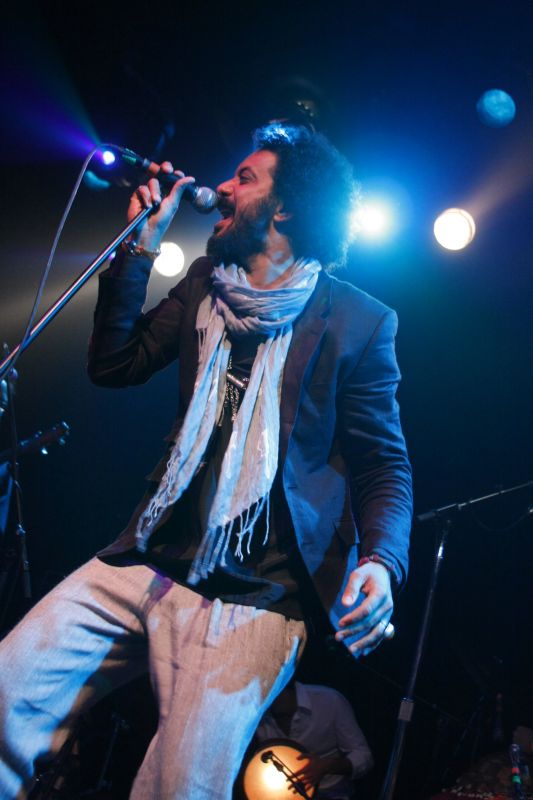 Back in June, Yemen was embroiled in political unrest, and the long-standing dictator had already begun a series of brutal crackdowns on protesters that would shortly bring the country to the brink of civil war. That was serious business, and you might have thought a band with musical and family ties to that country would be, you know, on edge about it. Not really, Yemen Blues frontman Ravid Kahalani told me then.

“I hear some things, but I really focus on something that’s much more basic than [politics],” he said.

To judge by a recent show in San Francisco (wrapping up a summer-long US tour), Kahalani’s non-interest in politics belies a singular musical focus that leaves him free to disregard pretty much everything else, including the cultural barriers that separate musical genres. No one in the band claims Yemen as their homeland, yet traditional Yemenite folk music figures heavily; you won’t see a guitar on stage, yet the blues wails in every song.

An uninhibited Kahalani ruled the stage with octave-jumping vocals, James Brown dance steps, and mic-stand dry-humping skills that would have made Elvis blush. Meanwhile, the octet behind him rocked the hell out of violas, trombones, and the Egyptian proto-guitar known as an oud, and an impressive spread of hand drums. If that sounds like a cacophony, it was anything but. The ensemble maintained a rich balance, with ample space for soloists—nearly every musician played alone on the stage at some point during the set.

What makes Yemen Blues’s lush orchestrations and thick harmonies so unique is the exacting mixture of styles that, geographically speaking, put the band at once in Yemen, Israel, New York City, and the Mississippi delta. The basic underpinnings of the band’s sound hearken to traditional religious chants in Arabic Kahalani learned as a child in Israel (his family, suffering persecution against Jews, left Yemen a couple generations ago), and their sonic residue shows through in the slower numbers.

I had expected all that, but the group’s gritty approach to the blues came as a shock. Kahalani’s gurgling bass vocals were straight out of Tom Waits, but just as you were about to light a cigarette and go looking for the bottom of a bottle, the drummers snapped your hips into action with a sexy, off-kilter Yemenite dance beat. Again, Kahalani shrugged off this apparent inconsistency: “For me, blues is something that can be in any culture, because it’s the same soul singing, the same soul feeling of music, and to me it doesn’t matter if it’s a guy from Mississippi singing the blues or a Yemenite guy singing chants.”

That feeling, what Kahalani called the “moment of the soul,” is the “something” he puts above politics. He trusts that when he gives the feeling to his audience, they will forget that they don’t understand his Arabic lyrics, and experience a boundary-melting moment that mirrors the music itself. Fela Kuti, in the canon of African stars Kahalani cites as influences, sought to unify people through a direct call to political action. Kahalani takes a subtler and more elusive approach, but, not surprisingly, that doesn’t seem to bother him: “We found some kind of sound that you cannot really feel or say clearly what it is…and apparently lots of people all over the world like it.”