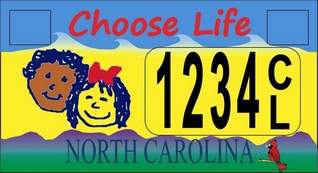 Anti-abortion lawmakers in North Carolina have passed a bill allowing the state to issue license plates with a pro-life slogan. Drivers can buy the “Choose Life” plate for a $25 fee, and $15 of that will go to so-called “crisis pregnancy centers” that seek to deter women from having an abortion. Now the state chapter of the ACLU has filed suit, arguing that the state is violating the First Amendment by not offering plates that include a message in support of abortion rights.

There were attempts to get an alternative plate during the legislative debate, with options like “Respect Choice” or “Trust Women. Respect Choice” offered. But lawmakers rejected those, and while House Bill 289 included a bunch of new license plate options, there wasn’t a pro-choice option among them. Residents of the Tar Heel state can, however, show their support for the NC Horse Council, the Carolina Raptor Center, fox hunting, stock car racing, the Friends of the Appalachian Trail, or AIDS awareness, in addition to the anti-abortion plate.

“If anti-choice drivers are permitted to express their views on their license plates, people like me should be able to express our view that women deserve full reproductive freedom,” Sue Holliday, one of the four plaintiffs in the ACLU’s complaint, said in a statement.

And here’s what Katherine Lewis Parker, the legal director of the ACLU of North Carolina, had to say:

Of course, the supporters of the plate aren’t big fans of the suit. Rep. Mitch Gillespie, the bill’s sponsor, told the Raleigh News & Observer that the suit is just an attempt by “an evil liberal organization to try to appease its liberal base.”

Twenty-six states have their own versions of the “Choose Life” plate. Its supporters say that 573,000 plates have been sold or renewed, which has raised $13.6 million for their cause.

Maybe it’s just me, but it seems nuts that the state would be involved in promoting any specific interest group via license plates—pro-life, pro-choice, pro-NASCAR, whatever. Creating and selling them uses state resources… and what’s the benefit to the state? We’d never ask for special endorsement stickers for your driver’s license or passport. Can’t people just get a regular-old-license-plate and donate directly to whatever interest group or issue they feel inclined to support? And, if you really must share that passion via your automobile, can’t you just buy whatever bumper sticker you want?