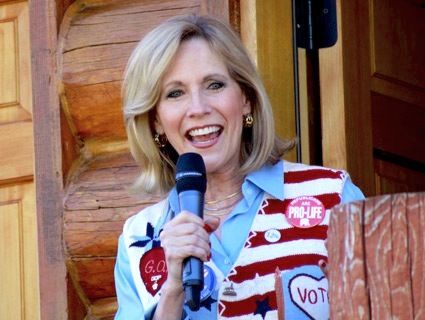 Since taxes are the ultimate issue for tea party activists—TEA is an acronym for “taxed enough already”—you can usually count on the movement faithful to be well versed in the minutiae of the subject, reciting their talking points like evangelicals quoting the Bible. But on Friday I met with an aspiring tea party congresswoman who didn’t seem quite so familiar with the vagaries of the tax code.

Often referred to as the “Sarah Palin of Utah,” Republican Cherilyn Eagar is challenging endangered Blue Dog Democrat Rep. Jim Matheson. Eagar, who was in DC on a fundraising tour, had requested a meeting with me after I had written a blog post about her race a few days earlier. So I took the opportunity to ask her if, as with many Republicans today, she was opposed to any form of revenue increases that might help balance the budget. In fact, she said, she was not. She favors increasing the sales tax, because it’s “progressive,” and based on consumption.

In reality, the sales tax is highly regressive, falling heavily on poor people who might not even have to pay income taxes, which are progressive. When I pointed this out, Eagar seemed confused. She didn’t seem to realize that just because the total amount of sales tax might be higher on a yacht than on a bag of groceries, it’s still regressive. So I explained to her how a 6 percent sales tax, like we have in DC, eats up a larger proportion of the income of someone making less money than someone making more money. In response, she said…nothing.

It was an unusual cap on an unusual interview. Sitting in a DC Caribou Coffee, I spent an hour with Eagar talking taxes, gay marriage, and the challenges of being a female candidate. Eagar told me she was in town trying to drum up establishment support (i.e. money) for her candidacy and basically “trying to convince them I’m not a bimbo.”

A youthful 60, Eagar was poised and dressed for success in a neat blue suit. She described the challenges of running as a woman in Mormon-dominated Utah. In Utah’s history, only three women have represented the state in the House of Representatives (none have been elected to the Senate). The last woman to represent Utah in Congress was something of a disaster. Enid Greene Waldholtz was, like Eagar, a conservative Republican. She had barely been in office a year when news broke that her husband had embezzled millions from her father and illegally diverted $2 million of it into her campaign in 1995. He ended up in prison, and she disappeared from electoral politics after one term in Congress.

Given the history, Eagar said she knew she had to work twice as hard and be twice as good as the men in the race. (So far there is one other Republican running in the primary, but it’s unclear whether he will remain in the same district as the Legislature redraws the electoral map.)

Eagar’s not a political novice. She was one of the many tea party candidates who ran in Utah’s GOP primary last year to try to knock off longtime GOP Senator Bob Bennett. She lost to Mike Lee, who beat Bennett in the primary and went on to become Utah’s newest senator. Eagar ran a 1996 congressional campaign for a Utah candidate, and she worked on Pat Buchanan’s 2000 presidential campaign.

A longtime culture warrior and something of an anti-feminist, Eagar fought the Equal Rights Amendment back in the ’70s aside the Eagle Forum’s Phyllis Schlafly and worked to combat sex ed in public schools and the scourge of pornography. In 1977, she went to the United Nations during the International Women’s Year Conference to oppose the agenda of “radical feminists” like Bella Abzug. One of her current crusades in Utah is to put the “fault” back in divorce, reversing a hard-won battle fought by feminists to make it easier for women to leave a marriage without having to prove that her husband had say, cheated on her. “No-fault divorce has done more harm than good,” she told me.

One of the more interesting items on Eagar’s lengthy résumé was her stint running a musical theater training program in New York City. It seemed like an odd entry in a political bio thick with anti-gay activism. Not to stereotype, but there are quite a few gay people in musical theater. “Fifty percent of my staff was gay,” Eagar says, noting she has lots of gay friends, and that some of her close friends had even died of AIDS.

So how, I asked, does she square this with her efforts to prevent gays from marrying? Eagar replied that her gay marriage opposition is based on her belief that it harms children. “I believe gender identity is important,” she explained. “I love being a woman. I learned to love being a woman from a mom who loved being a woman.” She didn’t answer when I asked her if she thought her gay friends would make bad parents.

Instead, she cited studies by Simon LeVay, the scientist who has found structural differences in the brains of gay men versus straight men. She also mentioned anecdotal stories of people who’ve had “reversals” of sexual orientation as evidence that “people can choose.” Eagar likened homosexuality to addiction: “It may be genetic, but people can choose how to respond.” Eagar insisted that even though she’s fought to keep gays out of schools and to keep them from marrying, she’s “never treated anyone rudely because of their lifestyle.”

It’s unclear whether Eagar can go the distance. She clearly offers some appeal to the social conservatives of the state. But she’ll also have to persuade the more cosmopolitan voters of Salt Lake City that her views aren’t so outside the mainstream that she’ll be a marginalized representative in Congress.

And here’s one paradox of Utah politics: While state legislators and others are quick to laud Eagar’s anti-porn activism publicly, Utah also leads the nation in smut consumption. When all those Salt Lake Mormon Playboy subscribers get inside the voting booth, they may well decide that Jim Matheson really isn’t so bad after all, even if he is a Democrat.