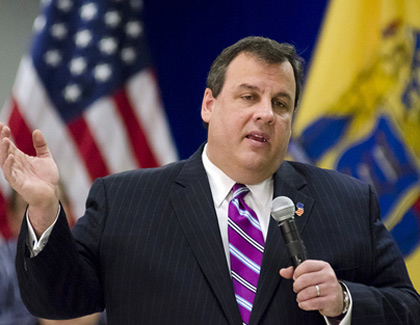 No matter how many times he insists he isn’t running for president, New Jersey Governor Chris Christie invariably ends up back in the 2012 conversation. As Part 2 of our report on the ultra-secret Koch brothers retreat in late June indicates, Christie isn’t lacking for supporters in high places, including among the elite right-wing donors and influence peddlers who lapped up his keynote address at the Ritz-Carlton outside Vail. He demurred when pressed by an audience member to reconsider his decision not to run, but Christie sure sounded like he had ambitions beyond the Garden State; he waxed poetic on themes of American greatness and proposed deep cuts to Medicare, Medicaid, and Social Security. Indeed, Christie bookended his secret appearance before the Koch audience that Sunday night with national television cameos on Meet the Press that morning and on Morning Joe, Fox & Friends, and Imus in the Morning the next.

Though Christie continues to deny that he has any intention of seeking the Republican nomination, the speculation won’t die. In part, that’s due to a steady drumbeat from conservatives dissatisfied with the current crop of candidates. A few weeks ago, conservative New York Times columnist Ross Douthat wrote that “the looming Romney-Perry showdown throws Christie’s strengths into sharp relief.” Formerly rumored presidential aspirant Rep. Paul Ryan (R-Wis.) also told CNN last week he’d like to see Christie get in the race. And we know that Christie has an unabashed admirer in at least one of the country’s most influential Republican kingmakers, David Koch, who labeled Christie “a true political hero” at the Colorado event.

But Christie hasn’t exactly been a passive bystander to the buzz surrounding his possible candidacy. On Sunday, former George W. Bush speechwriter Michael Gerson told ABC’s Christiane Amanpour that Christie was in Chicago just last week for “two meetings with serious Republican groups from the Midwest.” Gerson added, “He’s actively, I think, considering getting in this race, which would throw things open once more.”

Should Christie decide to get in, it would be quite the about-face for a man who complained to reporters last year in exasperation, “Short of suicide, I don’t really know what I’d have to do to convince you people that I’m not running. I’m not running!” And as The New Republic’s Jonathan Chait argues, it is highly improbable Christie will emerge as the GOP’s knight in shining armor. But with Republican nomination fight increasingly shaping up as a two-horse race between Mitt Romney, whose entreaties to the tea party have failed to win many converts, and Rick Perry, whose baggage as a 1980s Democrat (an Al Gore-supporting one at that) and penchant for saying crazy things are worrying many establishment Republicans, Christie may be tempted to jump into the fray. If neither Romney nor Perry does enough to ease conservative angst in this month’s three GOP debates, that temptation is only likely to grow—as no doubt will the speculation.