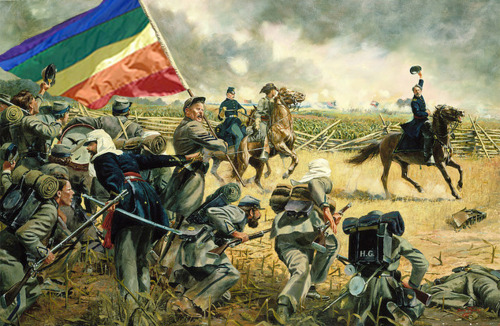 After 18 years and 14,500 military discharges, the end came easily. “Today marks the end of ‘Don’t As Don’t Tell.’ The law is repealed,” the Army’s leadership wrote in a letter (PDF) released just after midnight Tuesday morning. “From this day forward, gay and lesbian Soldiers may serve in our Army with the dignity and respect they deserve.”

Notwithstanding the Army brass’ cheery pronouncements, challenges remain. Homophobia and harassment will likely still concern military leaders. And out service members will still experience one significant iniquity, as BBC’s Kate Dailey points out: Their life partners will not be afforded the same legal rights and benefits extended to straight spouses, thanks to the federal Defense of Marriage Act. “Health care, housing, the big ones are still out of the reach of many of service members who are legally married but of the same sex,” an advocate tells her.

Nevertheless, it’s progress on a once-unimaginable scale. In interviews with students at the military’s service academies, the AP confirmed what we already knew: These bastions of civic virtue were already relatively gay-tolerant.

…midshipmen and cadets say the issue of homosexuality is not a flashpoint of controversy for many members of their generation. Academy students who were not yet in their teens when the Sept. 11 terrorist attacks happened and have grown up in a nation at war say competence and character are what matter to them, not sexual orientation.

Even more remarkable, though, are the individual service members’ stories that are already trickling into the press—and that are likely to turn into a torrent once the policy’s shrunk in the rearview mirror. Over at Stars & Stripes, Leo Shane reported on the coming out of Air Force 1st Lt. Josh Seefried, who for more than a year had lobbied politicians under the pseudonym “J.D. Smith.” “When I go into work now, my life will be completely changed,” Seefried told Stripes. “It’s scary, but it’s also exciting. And that’s how it will be for a lot of gay troops.”