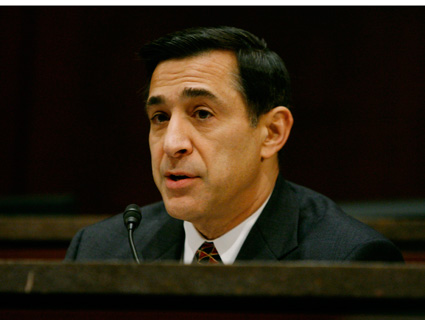 When the 2010 electoral wave handed control of the House of Representatives to the Republicans, Rep. Darrell Issa (R-Calif.) had finally arrived at his moment in the sun.

With the GOP now in the majority, the twice-arrested (but never convicted) six-term Congressman, whose ability to charm and exude good humor belies behavior that would suggest the heart of a shark, ascended to the chairmanship of the powerful House Oversight and Government Reform Committee. Armed with subpoena power and the authority to investigate, hassle, and obstruct the Obama White House for at least the remainder of the president’s first term, Issa found himself firmly ensconced in the catbird seat.

Making the position all the sexier was the media attention that came with the job, including guest appearances on Real Time With Bill Maher, frequent visits to the cable news shows, and a busy Sunday morning network talk show schedule.

All the attention seemed to suit Rep. Issa just fine. And then…nothing.

Almost a year into his term as chairman, Issa has produced no headline-grabbing investigation capable of putting the White House on the defensive or, for that matter, causing so much as a flutter of indigestion for the president. The congressman’s efforts to probe everything from Homeland Security to Obamacare have failed to create the media buzz that might catapult the California representative to GOP hero status—and maybe even a spot on the national ticket as a vice presidential candidate. Who knew that the freshman tea party members were going to suck all of the oxygen from the halls of Congress and leave Chairman Issa gasping for air?

As a result of Issa’s failure to kick his committee into gear, he finds himself flailing away at anything the news cycle may have to offer, hoping he might get lucky and trip over something that will manage to put a few points on the board.

Last week, Issa took a shot at attempting to tie the Obama administration to the “Fast and Furious” scandal wherein the Bureau of Alcohol, Tobacco, Firearms, and Explosives allowed weapons bought in the United States to end up in the hands of a Mexican drug cartel. With the acting director of the ATF and a US Attorney already having resigned over the screw-up, it is unlikely that Issa’s investigation will gather any steam or salacious headlines.

Knowing that “Fast and Furious” is likely to die a slow and sluggish death, Issa is now working hard to make a fuss over the Solyndra loan, attempting to tie political contributions to the president and the influence of Issa’s Oversight Committee predecessor, Rep. Henry Waxman (D-Calif.), as the reason a large loan was given to the now bankrupt solar panel company.

In the case of the president’s people, in the case of Henry Waxman, clearly you had people who saw a link between their campaign contributions, their ideological bent, and these companies.

Of course, what Issa failed to note is that the Solyndra loan was a multiyear process that was started by the Bush administration in 2007. He also fails to point out that while one of the investors in Solyndra is George Kaiser, an Obama contributor, another large investor is Madrone Capital Partners, an investment firm funded by the Walton family (Walmart) and a long-time large contributor to Republican causes.

As for the accusation that Issa has leveled against his congressional counterpart, Henry Waxman, Waxman has flat out denied Issa’s claim, stating that he had never met anyone from Solyndra until 2011—long after the loan was made. Waxman further suggested that the chairman of so important a committee as the House Oversight panel would do well to get his facts straight.

Issa’s Solyndra investigation will not only go nowhere in terms of discrediting the White House but it may also embarrass some Republicans along the way. Oops.

While some may question the competence of Issa to fill the role of inquisitor in chief, it might just be that the congressman is the victim of a White House that does business on the level, thus making itself a very difficult target. For now, the ambitious Issa remains all dressed up with nobody to attack.