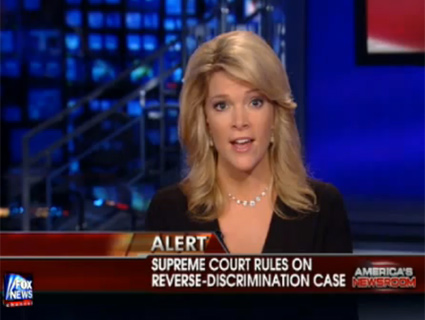 The Brookings/PRRI study uses “reverse discrimination”—an unfortunate term that suggests a difference in kind, not in degree—to describe anti-white discrimination. Nevertheless, the revelations about the views of consumers who most trust Fox News are disturbing:

The financial crisis wiped out 20 years of minority wealth gains, and minority incarceration and unemployment rates are far higher than those of whites, but white Americans have nevertheless become more receptive to the idea that whites face as much discrimination as minorities. While the numbers for those who trust Fox News are much higher, a majority of whites in the study, 51 percent, also say they believe discrimination against whites is as big of a problem as discrimination against minorities. That’s despite relatively low levels of interaction between whites and minorities. According to the study, “More than 8-in-10 Americans report having a conversation with an African-American person at least once a day (43 percent) or occasionally (40 percent).” Most of these exchanges, apparently, involve black people callously turning down whites applying for jobs or home loans. Nevertheless, while opinions of Muslims and immigrants vary by age and political perspective, demographic groups surveyed expressed positive impressions of African Americans across the board. (Otherwise, they might be racist or something.)

When it comes to Muslims, the study shows that the funders of the more than $40 million Shariah panic industry are getting their money’s worth. Although two-thirds of Americans say that Muslims are not trying to establish Shariah law in the US, “[o]ver the last 8 months agreement with this question has increased by 7 points, from 23 percent in February 2011 to 30 percent today.” The number of Republicans who buy that Muslims are trying to establish Shariah law in the US is up 14 points since August 2011, from 31 percent to 45 percent.

Fox News is a crucial outlet for fomenting Shariah panic. According to the study, “There is a strong correlation between trusting Fox News and negative views of Islam and Muslims,” as “[n]early 6-in-10 Republicans who most trust Fox News believe that American Muslims are trying to establish Shari’a law in the U.S.,” and 72 percent of “Fox News Republicans” agree that Islam is “at odds with American values.” If you’re a Republican, you’re more likely to think that white people are as discriminated against as minorities and that American Muslims represent a fifth column trying to subvert the Constitution. But if you’re a Republican who watches Fox News, then you’re far more likely to believe those things, thanks to a steady media diet of racial resentment and Muslim-baiting paranoia.

*Updated to reflect the fact that the poll was done by PRRI, and that the study was a joint venture.