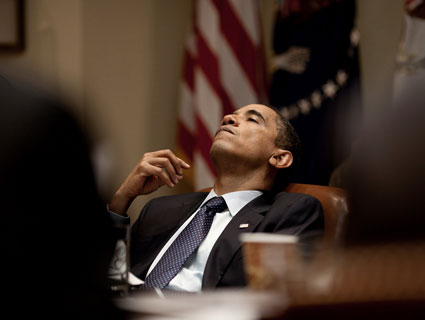 Republican state legislators in Pennsylvania are pushing a scheme that, if GOPers in other states follow their lead, could cause President Barack Obama to lose the 2012 election—not because of the vote count, but because of new rules. That’s not all: There’s no legal way for Democrats to stop them.

The problem for Obama, and the opportunity for Republicans, is the electoral college. Every political junkie knows that the presidential election isn’t a truly national contest; it’s a state-by-state fight, and each state is worth a number of electoral votes equal to the size of the state’s congressional delegation. (The District of Columbia also gets three votes.) There are 538 electoral votes up for grabs; win 270, and you’re the president.

Also read: The Koch brothers’ secret war plan to take down Obama—plus a list of their million-dollar donors.

Here’s the rub, though: Each state gets to determine how its electoral votes are allocated. Currently, 48 states and DC use a winner-take-all system in which the candidate who wins the popular vote in the state gets all of its electoral votes. Under the Republican plan—which has been endorsed by top GOPers in both houses of the state Legislature, as well as the governor, Tom Corbett—Pennsylvania would change from this system to one where each congressional district gets its own electoral vote. (Two electoral votes—one for each of the state’s two senators—would go to the statewide winner.)

This could cost Obama dearly. The GOP controls both houses of the state Legislature plus the governor’s mansion—the so-called “redistricting trifecta“—in Pennsylvania. Congressional district maps are adjusted after every census, and the last one just finished up. That means Pennsylvania Republicans get to draw the boundaries of the state’s congressional districts without any input from Democrats. Some of the early maps have leaked to the press, and Democrats expect that the Pennsylvania congressional map for the 2012 elections will have 12 safe GOP seats compared to just 6 safe Democratic seats.

Under the Republican plan, if the GOP presidential nominee carries the GOP-leaning districts but Obama carries the state, the GOP nominee would get 12 electoral votes out of Pennsylvania, but Obama would only get eight—six for winning the blue districts, and two (representing the state’s two senators) for winning the state. Since Obama would lose 12 electoral votes relative to the winner-take-all baseline, this would have an effect equivalent to flipping a medium-size winner-take-all state—say, Washington, which has 12 electoral votes—from blue to red.* And Republicans wouldn’t even have to do any extra campaigning or spend any extra advertising dollars to do it.

Nebraska and Maine already have the system the Pennsylvania GOP is pushing. But the two states’ small electoral vote values mean it’s actually mathematically impossible for a candidate to win the popular vote there but lose the electoral vote, says Akhil Reed Amar, a constitutional law professor at Yale University. Pennsylvania, however, is a different story: “It might be very likely to happen in [Pennsylvania], and that’s what makes this something completely new under the sun,” Amar says. “It’s something that no previous legislature in America since the Civil War has ever had the audacity to impose.”

If Obama has another landslide win, the GOP rule-tinkering might not change the outcome. But given the state of the economy and Obama’s low approval ratings, the election is likely to be close. If the president wins the states John Kerry won in 2004 plus Ohio—otherwise enough to give him a narrow win—changing the electoral vote rules in Pennsylvania alone would swing the election to the Republican nominee.

“This would effectively extend the effect of gerrymandering beyond Congress and to the Electoral College.”

It doesn’t necessarily end there. After their epic sweep of state legislative and gubernatorial races in 2010, Republicans also have total political control of Michigan, Ohio, and Wisconsin, three other big states that traditionally go Democratic and went for Obama in 2008.* Implementing a Pennsylvania-style system in those three places—in Ohio, for example, Democrats anticipate controlling just 4 or 5 of the state’s 16 congressional districts—could offset Obama wins in states where he has expanded the electoral map, like Colorado, New Mexico, North Carolina, or Virginia. “If all these Rust Belt folks get together and make this happen, that could be really dramatic,” says Carolyn Fiddler, a spokeswoman for the Democratic Legislative Campaign Committee (DLCC), which coordinates state political races for the Dems.

Democrats would not be able to retaliate. The only states that John McCain won where Dems control both houses of the state legislature are Arkansas and West Virginia.* West Virginia is too small for splitting the electoral votes to have much effect. That leaves Arkansas, another small state—and one where McCain won every district handily in 2008.

Nor is there anything obviously illegal or unconstitutional about the GOP plan. “The Constitution is pretty silent on how the electors are chosen in each state,” says Karl Manheim, a law professor at Loyola University in Los Angeles. The GOP plan “would certainly increase the political advantage of politically gerrymandering your districts,” he adds.

So far, Democrats have been fighting back with the argument that switching to allocating electoral votes by congressional district would reduce Pennsylvania’s importance in the presidential race. “Presidential elections are decided by ‘basically Pennsylvania, Michigan, Ohio, and Florida,’ because each is a swing state with a large block of electoral votes up for grabs,” former Pennsylvania governor Ed Rendell told the Pittsburgh Tribune-Review. That, Rendell said, gives Pennsylvania more pull with presidents of both parties. But that argument “doesn’t hold much sway with state legislators,” Fiddler says. And if rule changes in Pennsylvania or other Rust Belt states put a Republican in the White House, the president might be more indebted to party leadership there, not less.

For now, the Democrats’—and Obama’s—only real way of fighting back is political. “The political solution, if there is one, is going to have to come from getting people outraged about this,” Amar says. “This is not American fair play; it’s a partisan steamroller changing the fundamental rules of the small-d democratic game for purely party advantage. Trying to structure the world so that even the person who wins the state loses the state’s electoral vote: That is new under the sun.” He adds, “This is big.”

UPDATE, September 14, 4:15 p.m. EST: The National Popular Vote Interstate Compact has come up a lot in the comments as a potential way to blunt the impact of the proposed Pennsylvania rule changes. Under the compact, which is an idea Akhil Reed Amar (quoted above) helped develop, states pledge to give all of their electoral votes to the winner of the national popular vote, regardless of the outcome in the state. It could work—if enough states adopted it. But so far, only nine states (including DC) representing just 132 electoral votes have signed on—and they’re all solidly blue. Bills to join the compact are at various stages in a number of other states, but the problem is this: if Republican legislators are seriously considering the Pennsylvania plan, why would they turn around and embrace a proposal that has essentially the opposite effect? NPV is a powerful idea. But right now, it doesn’t have the bipartisan support to counteract the Pennsylvania plan.

*Correction: This sentence previously referred to Nevada and then New Hampshire. Those were both wrong. It’s actually much, much worse for Obama than I originally thought. I also said 2012 where I meant 2008 and said both houses of the legislature in Mississippi were controlled by Dems. That was wrong too. I’m really sorry about the mistakes. (Return to the first corrected sentence.)