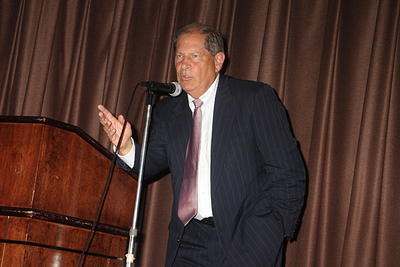 Democrats took a beating on Tuesday night in a pair of special elections in Nevada and New York. A Democratic loss was expected in Nevada’s GOP-friendly 2nd congressional district in the race to replace Rep. Dean Heller, who was appointed by Gov. Brian Sandoval to take over the seat of disgraced US senator John Ensign after his resignation. But in the fight to fill the seat left by Rep. Anthony Weiner in New York’s 9th congressional district, Republican Bob Turner’s victory dealt Democrats a stinging blow in a traditionally blue district.

Just weeks ago, Democrats were expected to retain New York’s 9th congressional district seat in Tuesday’s special election, despite the spectacle of Weiner’s downfall. Weprin, however, committed a series of gaffes in the six-week run-up to the election, including blanking on the size of the federal deficit (he cast himself a fiscal crusader) and bailing out of a debate the day after the debt goof.

But arguably the biggest issue in the NY-9 election was Israel. While both Weprin, an Orthodox Jew, and Turner, a Catholic, tacked to the far right on Israel, Tuesday’s election, in which a large percentage of Orthodox Jews cast ballots for Turner, was seen in part as a referendum by Israel’s strongest defenders on President Obama’s Israel policy. As Talking Points Memo reported, former New York mayor Ed Koch, a Democrat, supported Turner in the race in the hopes of electing the Republican and delivering a message to Obama over his dissatisfaction with his stance toward Israel. (In May, Obama proposed that Israel and Palestine return to pre-1967 borders, an unpopular idea among Israel policy hardliners.) It didn’t help Weprin that, as Jewish Week reported, a group of rabbis in Queens even forbade supporting Weprin in the election for his views.

Not that national Democrats didn’t throw a lot into the NY-9 race. They spent hundreds of thousands of dollars to boost Weprin, blanketing the district with robocalls featuring former President Bill Clinton and Gov. Andrew Cuomo. But in the end, the polls showing Turner with a modest lead just days before the election proved accurate.

Turner’s victory in NY-9 can be seen as a referendum of sorts on Obama. “If Turner wins on Tuesday it will be largely due to the incredible unpopularity of Barack Obama dragging his party down in the district,” Public Policy Polling’s Tom Jensen wrote on Sunday. “Obama won 55 percent there in 2008 but now has a staggeringly bad 31 percent approval rating, with 56 percent of voters disapproving of him.”

The Nevada election is not so surprising. It replaces one Republican congressman with another, in a heavily Republican district where a Democrat has never won. Not only that but Marshall was seriously outgunned in the political money wars: Republican groups spent upwards of a million dollars to support Amodei, but the Democratic Congressional Campaign Committee spent zilch on TV ads for Marshall. Like Democrat Kathy Hochul in New York’s 26th congressional district, Marshall’s message to voters largely consisted of bashing GOPers for wanting to dismantle Medicare. It’s now clear that the Medicare magic didn’t work this time.

That didn’t stop Republican officials from claiming Amodei’s unsurprising win was also a referendum on national Democrats. “Even in the home state of Senate Majority Leader Harry Reid, voters have turned on the president,” Reince Priebus, chair of the Republican National Committee, said.