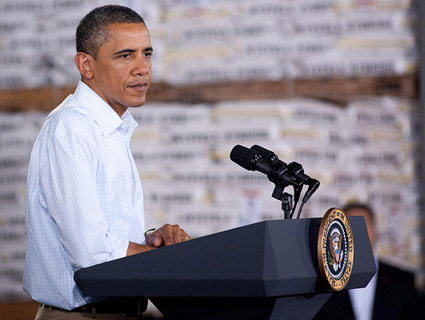 UPDATE: In a feisty speech on Thursday night before a joint session of Congress, President Barack Obama demanded that the legislators pass a $447 billion jobs plan, including various tax cuts, extended unemployment insurance, funds for infrastructure projects and the rebuilding of schools, and other provisions. Obama spoke forcefully and directly challenged Congress to move quickly, noting he would take his message to every corner of the nation. He appeared to be setting up a fight, if the Republican House balks.

It was a time of economic uncertainty. The jobs picture was bleak. The president’s approval numbers were low. The opposition was howling that his policies were ruining the economy. Voters were losing faith in his ability to handle economic matters. What did this president do? He delivered a major speech. He noted that millions of Americans had recently been thrown out of their jobs. He proclaimed there was “an urgent need to accelerate job growth in the short term.” And he proposed job-creating initiatives that would cost up to $200 billion and called on Congress to enact these measures quickly.

That president was Barack Obama—back in December 2009, when his economic advisers feared that the recovery, which had been boosted by the stimulus package passed earlier in the year, was weakening. After months of wrangling in the White House, Obama and his aides had finally concluded that another shot of stimulus—though they didn’t call it that—was necessary. So that month, Obama delivered a big speech at the Brookings Institution and proclaimed the need for a series of new initiatives. But what came next? Basically, not much. There was little, if any, follow-up. The president and the White House were preoccupied with the health care reform slog, and Obama did not lead a charge for his new jobs plan. “Health care and stimulus fatigue trumped,” a member of the White House economic team recalls.

That’s why what Obama does after Thursday night’s much-anticipated jobs speech before a joint session of Congress is just as important—if not more so—as what’s in the speech.

In that 2009 Brookings address, Obama proposed a list of solutions to the jobs crisis: a collection of tax breaks and loans for small businesses, a hiring-tax credit, an infrastructure program, incentives for homeowners who retrofit their houses, an extension of unemployment benefits, and fiscal relief for states. Time magazine observed at the time that this was a “new Obama,” using “fighting words” to advance another stimulus that he was not calling a stimulus. Noted economist Mark Zandi praised the move, saying, “We have to make absolutely positively sure that this recovery evolves into a self-sustaining economic expansion, and that is what this is all about.” Yet that speech didn’t end up mattering. It did not mark “a new Obama” or a new fight. (And Obama delivered that address when the Democrats controlled the House and maintained a filibuster-proof majority in the Senate.)

This was not the only time that Obama readied for a fight that he subsequently sidestepped. This past April, he delivered a humdinger of a speech at George Washington University, slamming the GOP over the slash-and-burn budget proposal of Rep. Paul Ryan (R-Wis.). Republicans, he declared, were pushing a “deeply pessimistic” vision of America’s future: “This is a vision that says even though Americans can’t afford to invest in education at current levels or clean energy, even though we can’t afford to maintain our commitment on Medicare and Medicaid, we can somehow afford more than $1 trillion in new tax breaks for the wealthy.” Such a vision, Obama pledged, would not prevail “as long as I’m president.” Obama, it appeared, was putting up his dukes. But following this address, his White House entered into talks with Republicans concerning the debt ceiling and these thematic fighting words were supplanted by the less-inspiring back-and-forth of hostage negotiations.

A presidential speech is usually not the end; it’s the beginning of a process. Whatever Obama proposes on Thursday evening, the actions he takes afterward will be critical. (The inevitable prespeech leaks indicate that Obama will serve up a less-than-imaginative combo of measures, including a payroll tax cut, extensions of other business tax cuts, infrastructure funding, and aid to states to prevent teacher layoffs.) Will Obama merely return to grinding out the next budget compromise with the Republicans? After all, the legislation funding the federal government runs out at the end of this month. Will he maneuver for the best position in the unfinished deficit battle, in preparation for the proposal to be produced before Thanksgiving by the so-called super committee established under the debt ceiling compromise? Or will he launch a crusade for these jobs measures?

Spearheading a jobs push will entail more than speechifying. The president will have to find methods to mobilize constituencies and voters to join him in pressuring Congress. He will have to do more than just repeat the call he issues on Thursday night. No doubt, much of what Obama suggests will be DOA with congressional Republicans—especially the tea party wing—who can be expected to continue insisting that what ails the economy is Obama and government spending. In the face of this fierce opposition, Obama will need to create an ongoing narrative that engages the media and citizens. This probably will require dramatic steps to cut through the usual clutter of the political world, and such actions won’t come unless the president and his aides are truly committed to this priority.

A speech can grab the attention of the political class and voters for a day (sometimes longer if there’s high-schoolish bickering over its scheduling). More sustained engagement—which Obama was able to generate during the 2008 campaign—is a tougher task. After Obama departs the Capitol, and the last talking head utters the last piece of analysis, the president will be measured not by the echoes of his rhetoric, but the implementation of his tactics.