Today, moviegoers will meet a new action hero: the Machine Gun Preacher, the eponymous protagonist of a just-released film starring Gerard Butler (300) and directed by Marc Forster (Monster’s Ball, The Kite Runner). Butler plays Sam Childers, a shotgun- and smack-shooting biker who hits rock bottom, gets religion, and travels to Sudan, where he discovers the devil in the form of the Lord’s Resistance Army, the nihilistic child-kidnapping guerrilla group. Childers builds an orphanage and rescues kids from the LRA, then arms himself for all-out war on the group. “Hope is the greatest weapon of all,” goes the movie’s tagline. But judging from the trailer (watch it below), a rocket-propelled grenade will do in a pinch. 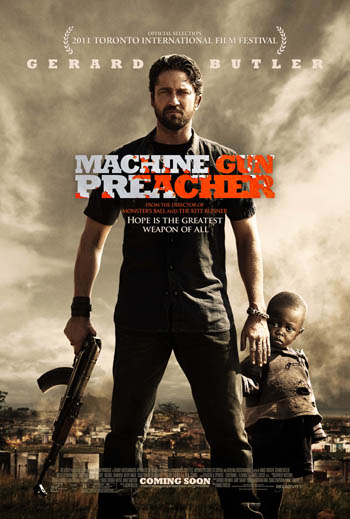 Hope is the greatest weapon of all, but an RPG will do in a pinch Relativity MediaThe Machine Gun Preacher is a familiar Hollywood character: The white Westerner who stumbles into a foreign land, discovers locals in desperate need, and embarks on a mission to kick ass in their name. (For more examples of this trope, from Lawrence of Arabia to Avatar, check out this clever video of Anglos Valiantly Aiding Tragic Awe-inspiring Races.) One reviewer, unimpressed by the movie’s predictable righteous-Rambo plot, sneers, “Did you guess that there was a scene where Childers screams to the Heavens as he clutches the legless corpse of a child?”

None of this would really matter if Machine Gun Preacher weren’t “based on the inspiring true story of one man’s extraordinary journey.” That man is a gruff 49-year-old whose arc from hell-raiser to holy warrior pretty much matches his celluloid version’s. Since 1998, Sam Childers’ orphanage in Nimule, near the Sudan-Uganda border, has provided shelter to more than 1,000 kids. After building the orphanage, his website explains, “Sam began to lead armed missions to rescue children from the LRA. It wasn’t long before tales of his exploits spread and villagers began to call him ‘The Machine Gun Preacher.'”

Until now, Childers has been largely unknown outside of evangelical circles. The new movie promises to make him a celebrity and fill his charity’s coffers. But it’s also inviting scrutiny from those who suspect his claims are exaggerated and that his gunfire-and-brimstone tactics, which reportedly include arms trafficking, are a disaster.

“Death hides in the tall grass of South Sudan,” opens Childers’ 2009 memoir, Another Man’s War, the inspiration for Machine Gun Preacher. The book burnishes his hard-charging humanitarian image, though from the start it’s clear that Childers has no use for turning the other cheek. “Less talking and more shooting would bring this whole conflict to an end sooner and save who knows how many lives,” he writes in the first chapter. Should you find such blood lust un-Christian, Childers adds: “The important thing to remember is that it wasn’t me doing all these incredible, even miraculous, things. It was always God.”

The book recounts many miraculous occurrences, such as an episode in which Childers hears that 200 LRA fighters are raiding a village and decides to ambush them with his four Sudanese bodyguards. “I liked those odds. I figured each of us was equal to forty of them,” he recalls in pitch-perfect screenwriter-ese. Childers hops into the driver’s seat of his truck, AK in hand. “That way I could pick it up and shoot one-handed while driving. Fully automatic, three- and four-shot bursts. I’ve done it plenty of times.” The gamble works, and the LRA fighters (30 of them, it turns out) flee. Childers later shrugs, “I should have died in ambushes a hundred times.”

Beyond Childers’s book and website, the most detailed picture of his work is in a profile by New York Times reporter Ian Urbina in the April 2010 issue of Vanity Fair. It portrayed Childers as a loose cannon who stockpiles weapons at his orphanage and moonlights as an arm dealer. Childers tells Urbina that he’s sold guns to armed groups in Rwanda and Congo. Pressed where he gets his arms, Childers snarls at Urbina, “You ask me another question about the arms dealing, I’m going to throw you out of the car.” When Childers comes across a Sudanese man whose baby is in desperate need of medical care, he barks, “I ought to beat you right here, you know that?” Intimidated, the man agrees to let Childers take the child to a clinic. The child lives, but Urbina is left wondering if Childers has ever taken a child from her parents against their will.

While Urbina uncovered no holes in Childers’ story, some find parts of it too good to be true. Brett Keller, an international-development blogger, looked closely at Childers’ increasingly slick promotional materials and found that his claims of death-defying exploits have multiplied over the past few years. Earlier versions of his charity’s website depicted him as a peaceful do-gooder; he now says he’s dedicated to hunting down LRA leader Joseph Kony and claims to be an honorary member of the Sudan People’s Liberation Army (one glowing profile described him as its “only white commander”). But two different SPLA generals have said Childers has no connection with the group, which is the dominant political faction in the newly formed South Sudan. Even if Childers is actually part of the SPLA, Keller notes that it is hardly squeaky clean: “While better than the LRA, the SPLA also has been known to use child soldiers during the period Childers sold them arms.” (Childers has since told Keller that he has never sold weapons to anyone.) 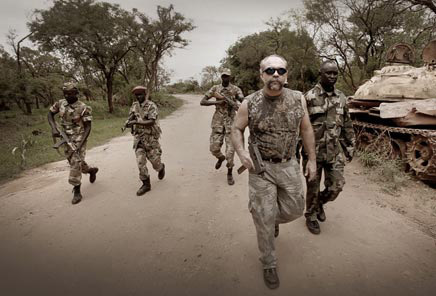 “Sam and the SPLA on patrol.” MachineGunPreacher.orgWhile Keller didn’t find solid evidence that Childers is guilty of the kind of fabrication or financial shenanigans ascribed to Three Cups of Tea author Greg Mortenson, he’s certain the Machine Gun Preacher is up to no good. “We can choose to believe that Childers’ claims are true, in which case he is dangerous, or that they’re false and he’s untrustworthy,” he writes. “The reality is probably that he’s a bit of both.”

Childers has also been denounced by aid workers—the kind who don’t carry submachine guns. The humanitarian-aid blog Tales From the Hood dubbed him a “douchenozzle,” explaining that “every time he fires off a few rounds (you know, for the children), he further cements in the minds of insurgent groups around the world that humanitarian workers are also mercenaries.” Similarly, an aid worker in South Sudan describes him as “batshit insane” and finds his tales of pursuing the LRA across Sudan’s borders “AWESOME. Except by AWESOME, I mean horrifying.” She continues: “Don’t get me wrong, the LRA is an awful group and Kony is an egotistical maniacal nutjob, but somehow I think that some arrogant American ‘leading’ the SPLA across borders might cause just a touch of international outrage. Which is why I, like many others, have doubts as to the full truths of his claims.”

It’s unlikely that any of this criticism will dampen the excitement surrounding Machine Gun Preacher. But it certainly raises the possibility that the action-movie version of Sam Childers’ life is a lot more morally and factually tidy than the real thing. Three Clips of Ammo, anyone?

Update: The case against Childers just got some added ammo from an investigation by Christianity Today, which reports that things are going badly at his Sudanese orphanage: “A government inspector in Nimule confirmed this week what community leaders have told CT: Childers is rarely on the premises and many of the children are living in poor conditions, lacking food, medicine, and proper hygiene.” Locals who have become disenchanted with Childers also say that he’s staged photos of combat and and child-rescue scenarios “to make his story sound more compelling and to attract more donors to his ministry.” The whole piece is worth a read.