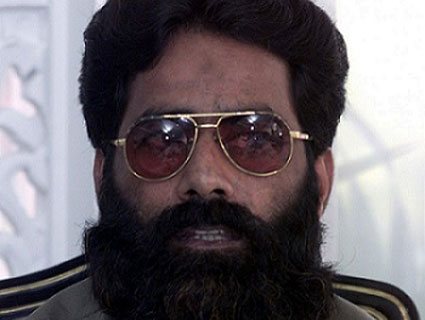 Ilyas Kashmiri, a Pakistani Al Qaeda leader, was reportedly killed by a US drone strike in June. The New Yorker's Dexter Filkins has suggested that strike was made possible by the interrogation and murder of a Pakistani journalist.<a href="http://en.wikipedia.org/wiki/File:Ilyas_Kashmiri_fair-use.JPG">Wikimedia Commons</a>

Dexter Filkins has a story in next week’s New Yorker, available online, about the late-May murder of Pakistani reporter Syed Shahzad. There is a lot of narrative in the piece, but there’s also a good bit of news. Filkins, who was in contact with Shahzad before his death, suggests that the reporter’s beating and murder (allegedly at the hands of Pakistan’s army intelligence service, the ISI) could have produced information that led to the death of Al Qaeda leader Ilyas Kashmiri in a drone strike four days after Shahzad’s body was found:

Given the brief time that passed between Shahzad’s death and Kashmiri’s, a question inevitably arose: Did the Americans find Kashmiri on their own? Or did they benefit from information obtained by the I.S.I. during its detention of Shahzad? If so, Shahzad’s death would be not just a terrible example of Pakistani state brutality; it would be a terrible example of the collateral damage sustained in America’s war on terror….

…The evidence is fragmentary, but it is not difficult to imagine a scenario in which Pakistani intelligence agents gave the C.I.A. at least some of the information that pinpointed Kashmiri. Likewise, it seems possible that at least some of that information may have come from Shahzad, either during his lethal interrogation or from data taken from his cell phone. In the past, the I.S.I. and the C.I.A. have coöperated extensively on the U.S. drone program….

…Bruce Riedel, the former C.I.A. officer, said that helping the agency kill Kashmiri would have made eminent sense to the I.S.I. Kashmiri had become an enemy of the Pakistani state, and had maintained potentially embarrassing contacts with Pakistani security services.

“If you start from the premise that the Pakistanis had something to do with hiding bin Laden, then you have to assume that they were trying very hard to put everything back into the tube,” Riedel said. “And so it would have made sense for them to get rid of Saleem Shahzad. And Kashmiri, too.”

Needless to say, the mere possibility that the US was able to kill Kashmiri because Shahzad was lethally interrogated raises some difficult questions. Anyway, read the whole thing.