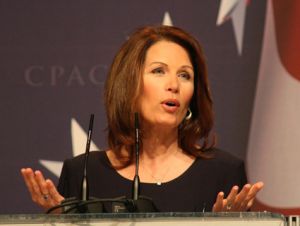 At Monday night’s GOP presidential debate, Rep. Michele Bachmann went after Rick Perry hard on the Texas governor’s 2006 decision to mandate the HPV vaccine for adolescent girls. On Tuesday morning, Bachmann doubled down, telling NBC’s Today Show about a conversation she’d had following the debate, with a Tampa woman. “She told me that her little daughter took that vaccine, that injection, and she suffered from mental retardation thereafter,” Bachmann said. “It can have very dangerous side effects.” She said the same thing on Fox News: “There’s a woman who came up crying to me tonight after the debate. She said her daughter was given that vaccine. She told me her daughter suffered mental retardation as a result. There are very dangerous consequences.”

This is a serious charge: A public official putting young girls at a risk for mental retardation, all in the name of crony capitalism. But is there anything to it? No—and according to Dr. Paul Offit, author of Autism’s False Prophets, Bachmann’s charged rhetoric could itself have dangerous consequences.

Bachmann, who is no stranger to conspiracy theories and junk science, is a little late to the party when it comes to the debilitating effects of vaccines. The charge leveled by the woman in Tampa—that vaccines can cause mental defects—was first raised in the late 1990s, and has been consistently debunked ever since. In 2010, the medical journal Lancet formally retratcted a paper by the British Dr. Andrew Wakefield which purported to draw a connection between the two, after it discovered that Wakefield had fabricated his data.

The problem, or at least one of them, is that as Offit explains, there’s no way, biologically speaking, for the HPV vaccine to even impact the nervous system. “It’s doesn’t even make biological sense,” he says. The Gardasil vaccine is produced by taking the gene that coats the HPV virus, and then putting that in a yeast plasma, which then produces a viral protein, which is then injected intramuscularly*. But it has nothing to do with the nervous system. But don’t just take his word for it: “HPV vaccines were studied in thousands of people in many countries around the world, including the United States,” notes the Center for Disease Control on its website. “These studies found that both HPV vaccines were safe and cause no serious side effects.”

“In a better world you would like to think the HPV vaccine would never need to be mandated,” says Offit. “If you seek out information—and I would argue I’m informed about vaccines, I mean my children are full vaccinated—you will make the right decisions. The problem is people like Michele Bachmann. If you’re looking to inform yourself about vaccines, she is going to misinform you.” Instead of choosing the potentially life-saving vaccination, parents will steer clear—and as a consequence, expose their children to potentially life-threatening diseases.

HPV’s danger is mostly as a stepping stone to the considerably more dangerous cervical cancer, which kills thousands of women every year in the United States. Perry mandated that all adolescent girls receive the vaccine by executive order—a move he says he now regrets—but significantly did inlcude an opt-out clause with which parents could make exceptions for their kids if they raised conscientious objections.

As for the concerns of parents whose children suddenly seem to have gone through some serious mental transformation, Offit is careful to put things in perspective: “HPV vaccines don’t prevent everything that occurs in adolescence; they only prevent HPV.”

It’s not an especially difficult concept: If the HPV vaccine is proven to save lives, then efforts to prevent people from receiving the HPV vaccine will likely have the opposite effect. Bachmann’s playing with fire on this one.

Update: Media Matters flags this clip from Bachmann’s appearance on Sean Hannity’s radio program today, in which she informs the conservative talk show host that she has “no idea” whether Gardasil can actually cause mental retardation—she was just “reporting” what her supporter had told her. Hannity, for one, doesn’t seem to buy it, which doesn’t speak well for Bachmann’s strength on the issue going forward.

*This section originally stated, inaccurately, that the vaccine was injected into the bloodstream.