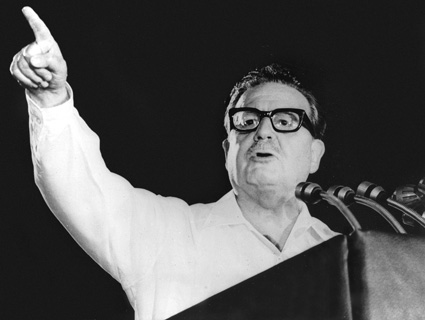 For the last decade, I have been haunted by voices from the other side of death. In this way, back in 2003 I transcribed the words of Pablo Picasso after a tapestry version of his famed painting Guernica at the entrance to the Security Council was covered over at the U.N. just before then-Secretary of State Colin Powell was to present the Bush administration case justifying an invasion of Iraq. From the depths of ancient Mesopotamia, I transcribed the words of Hammurabi, the exalted prince of Babylon, as he reviled Secretary of Defense Donald Rumsfeld for laying waste to his ancient land. And in that same year I found that Christopher Columbus, too, had words for the new warriors/conquerors of the twenty-first century, while the poets William Blake and Franceso Petrarca asked Laura Bush how she could sleep with the man responsible for so many deaths.

The dead were then silent for years, which left me unprepared when Salvador Allende came to me offering advice for Barack Obama. It seemed, at first glance, a strange connection. Elected president of Chile in 1970 by popular vote, Allende was overthrown in a CIA-backed coup three years later. On that other September 11th, also (coincidentally enough) a Tuesday, terror rained down from the skies as the Chilean air force bombed the Presidential Palace where Allende died, ending an experiment in constructing socialism through peaceful, democratic means, and inaugurating the long dictatorship of General Augusto Pinochet.

Barack Obama has never, of course, claimed to be a revolutionary like Allende, though he did once upon a short time ago give the impression of being a reformer dedicated to bringing about significant change. And though, like Allende, he has faced ferocious opposition to his plans from similarly conservative forces, there has never been the slightest rumor of a coup d’état in the United States (nor, as it turned out, any need for one)—though who knows what would have happened had Obama decided to take on the military-industrial/national security behemoth that essentially governs the country.

And yet, I have no doubt that Allende would have sympathized with Obama on his entry into the Oval Office, and that he would have appreciated his urge to search for common ground with his adversaries, as well as the intelligence and sophistication of his mind. And I’m sure he would have greeted young Barack’s election in 2008, as I did, with a certain joy, seeing in it the popular wish for a different sort of politics, a different sort of world.

Evidently, based on what follows, Allende did feel that it was worth sending a message to the American president from the shores of death where so much becomes clearer, where we will all ultimately discover whether we truly kept faith with the lives and dreams of those who, in turn, had faith in us.

Here, then, is his message:

I have held off, Barack Obama, till now,
I have bitten my tongue in this dusk and averted my gaze
if words like tongue and gaze and bitten biting bite
have any meaning under this grim face of night.
Now it is time that you knew what awaits you here
once you join us in the vast kingdom of the gone,
what your retreat and regret will be if you do not learn
the lessons I learnt from defeat,
the omen I am sending your way as you fail to lead
and flail and neglect the reason you became our hope.

I held off this warning, young Barack, till now.
Who was I, after all, to send you words of advice?
Surrounded as I am in this dark by the many who tried and failed,
who gave their lives to change the world so those unheeded
in the shadow of strife, the child who cries in the dawn of life,
the women and the old and the working poor could rise.
I am surrounded in this sorrow by those who did not prevail.
Who am I, after all, to send anyone a word of advice?

I died that September day at La Moneda in Santiago.
The bombs were falling and the fires burned
and I was worried about the child inside the womb of Beatriz,
my eldest daughter, I ordered her from the Presidential Palace
and only then started to rehearse in my head en medio del fuego
the last words I would pronounce, my goodbye
to the people of Chile, mi adiós, and my greetings to a world
that would have to continue without me, without one more word
from the man who was convinced he could bring justice and peace
to his people without bullets and blood, without widows and their sighs.

No more words from this dead mouth, except for these few I now send
and that may not arrive in time, Barack.
So many words die before they can be heard.
Back then, in 1973, in September, as the bombs fell,
as the soldiers mounted the stairs and I grabbed the gun
with which I would kill myself rather than be taken alive,
pay with my death so others might remember,
there were no thoughts of fire or hate for the United States,
of Richard Nixon who tried to destroy my land,
or Gerald Ford who followed through on that illegal plan,
elected by their people as freely as I by mine,
why waste my last breath cursing men like them,
how to anticipate that a boy like you, then barely twelve,
would someday steer the realm that hounded me to death,
that I’d send words like these to any American president?

The dead that keep me company swear it’s no use, no good.
Spartacus is nearby,
Jeremiah fills me with prophecy,
Nat Turner rebels again and again in his dreams,
our Joan of Arc, who knows so much about perfidy and pyres,
all, all calling out to those who live to repair the wounded world,
all without rest until the living attend the faraway
dead who did not betray.

They tell me not to speak to you, the enchantment gone.
He’s done it wrong, they say, too afraid to brawl and rage and stage
a final confrontation where his foes will bite the dust.
Not me, not I, it’s not a revolution he pursues.
Who was I to tell him to draw a bitter line in the sand?
Do you want him to end as I did, with a divided land?
And yet I was wrong, wrong,
I let myself be seduced by his song.
I gave you, young Barack, the benefit of too many a doubt,
I prayed you would not need my words from beyond the beyond,
that you would clean up and heal a world gone mad with greed.

Before you disappear, before you can no longer hear
my words from beyond the beyond and inside the ground,
before your run ends in downfall and rout and retreat,
let this old heart beating with the Earth and the stars
and the need for not one child, not one, to die for lack of love,
let me tell you one last secret found in the abyss of despair.
It is true that he who is mighty is he who makes of an enemy
a friend, mighty and wise is he who offers the foe
a way out, a bed to sleep in, a meal to share.
But not without a fight. Not without a fight.

Listen to me, Barack, listen to this man who left too soon
and never saw his grandchild born and lost his way.

You will be destroyed. I have seen men like them before.
They will stop at nothing, they want it all and more.
Can’t you see, can’t you see what is being planned?
You are the victim of a silent coup, an invisible invasion
of every last corner, every last law, every last height.
Don’t you understand that they want it all, that they don’t care?
I have seen them, they will not be stopped by smiles.
You will be destroyed, take down with you all that is good,
what the wretched of the Earth built against the dark.
These are the same men, the same billionaires, who did me in.

They will blow it all up, derail the train, they do not care.
They deal in fear, they do not know right from wrong.
Oh do not let yourself be seduced by the siren of their song.

They are coming for you as they came for me.
I can hear their footsteps drawing near.
And you ever more alone.

Listen, listen: if you are to go down, go down fighting.

Barack, listen to your name. Lightning, glittering of weapons,
blessed, blessing, be your name, go down fighting.

Barack, listen: if you are doomed, go down fighting,
so others can come after and build,
so a legend is left, a spark to start the next fire, to inspire
and bring word of a new world waiting to be born,
fight so there may be peace, fight for what you believe in,
do not leave the dead without consolation and the living with no faith.
Trust your name. Go down if you must, but go down fighting.

So that when you arrive on these shores
and look back as I do, you will have no regrets.

Go down if you must, but go down fighting.

Go down, Barack Obama, go down and rise up fighting.

Never believe it is ever too late.

Ariel Dorfman is a Chilean-American writer. His books have been published in over 40 languages and his plays staged in more than one hundred countries. He is the author, most recently, of Feeding on Dreams: Confessions of an Unrepentant Exile (Houghton Mifflin Harcourt). His website, including a message to his readers, can be viewed by clicking here. To listen to Timothy MacBain’s latest Tomcast audio interview in which Dorfman discusses the Occupy Wall Street movement and his own experience with democratic rebellions click here, or download it to your iPod here. To stay on top of important articles like these, sign up to receive the latest updates from TomDispatch.com here.