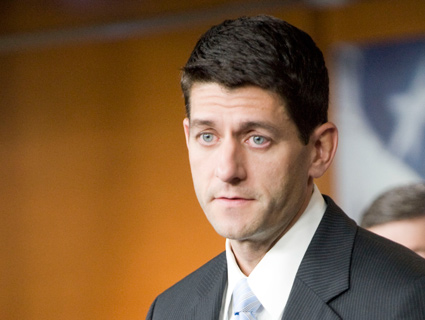 After Rep. Eric Cantor (R-Va.), the second-ranking Republican in the House, failed to deliver a speech on income inequality last week at the University of Pennsylvania, Republicans needed to prove that they care about making sure America is a place where everyone has a fair shot at moving up the income scale. So on Wednesday, Rep. Paul Ryan (R—Wisc.) went to the conservative Heritage Foundation to give a speech on the subject.

Ryan could have offered some useful proposals for addressing the growing gap between the richest 1 percent of Americans and the rest of us. Instead, he spent most of his time attacking Barack Obama for sowing the seeds of “class warfare.” For Ryan, the real problem isn’t income inequality, it’s the administration’s efforts to raise taxes on millionaires and billionaires, reform the health insurance industry, push for fair labor practices, enforce environmental safety standards, and encourage domestic investment in clean energy.

The central idea of Ryan’s speech was that the US is still a country characterized by “upward mobility”; a place where everyone has a fair shake at moving up the socioeconomic ladder. Unfortunately, that idea has little relationship to reality. As Mother Jones‘ own, now-legendary inequality charts illustrated in vivid, painful detail, upward mobility has been hard to come by in the US for four decades running. And as Brian Beutler laid out, the US trails many first-world countries in upward mobility.

Obama’s re-election campaign, Ryan said, will prey on “fear, envy, and resentment…Pitting one group against another only distracts us from the true sources of inequity in this country—corporate welfare.” Ryan’s suggestion that Obama and the Democrats want to preserve corporate tax breaks made his praise for “commercially competitive sources of energy,” code for big oil, particularly amusing. According to data compiled by Compustat in May, the oil industry receives $4.4 billion a year through federal tax loopholes. That’s versus the $527 million lost in the Solyndra affair, which Ryan mentioned repeatedly in his speech.

Ryan also dusted off his much-derided budget, which passed the Republican-controlled House in April. The plan, which Democrats are sure to run against in 2012, would turn Medicare into a voucher program and cut Medicaid spending by almost $800 billion over the next decade. According to the Congressional Budget Office, Ryan’s plan would cut federal Medicaid funding to states by 35 percent in 2022 and by 49 percent in 2030.

Despite the political liabilities the plan presents for Ryan, he has to stick with it, says Michael Linden, an economist at the liberal Center for American Progress. “If there’s one person that needs the budget plan to stay as a respectable alternative, it’s Paul Ryan,” Linden says. “His whole aura of budget wonk and the go-to guy for budget stuff on the GOP is based, in part on that budget. And so he cannot allow that budget to sort of disappear.”

Ryan’s defense of his budget may be understandable on political grounds, but it’s not a serious proposal for reducing income inequality. Instead, it would make the problem worse by making poor and middle-class elderly people pay more for their health care. As Jared Bernstein, Vice President Joe Biden’s former economic advisor, points out, “It’s one thing for the political class not to deal with the real problems we face; it’s quite another for them to make them worse” through budget plans like Ryan’s.

Between Ryan’s speech, Cantor’s undelivered address, and a recent event at the conservative American Enterprise Institute on the myth of income inequality, “the conversation has definitley changed,” Linden say. “Republicans are being forced to talk about these issues, and come up with their answer.” But judging from top GOPers’ statements thus far, it’s pretty clear that no one in the party has devoted much thought to why inequality exists, who’s responsible, and how to fix it.

Never fear, though: Mother Jones has the answers you crave. Read Kevin Drum’s piece on why screwing labor unions screws the middle class and check out our famous inequality charts for more.