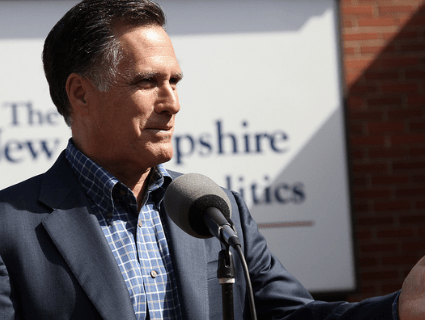 The tentative GOP primary schedule works just fine for Mitt Romney—which is why everyone else wants to change it.<a href="http://www.flickr.com/photos/mittromney/6207889543/sizes/z/in/photostream/http://flickr.com/link-to-source-image">Mitt Romney</a>/Flickr

On Tuesday, the Republican presidential candidates will gather in Las Vegas to debate the short- and long-term impacts of economic inequality and how to address them Mitt Romney’s Mormonism. This time, Buddy Roemer and Gary Johnson won’t be the only candidates watching from home: Former Utah Gov. Jon Huntsman has announced he’ll be skipping the event in protest of the state GOP’s decision to hold its caucus on January 14, which he believes is encroaching on the rightful domain of historically first-in-the-nation New Hampshire primary. As he put it, “The New Hampshire primary is too important and the process itself is too important to be compromised.”

Huntsman is saying this mostly because he’s bet his entire campaign on a strong showing in the Granite State, but he isn’t the only candidate to express dissatisfaction with Nevada. Rep. Michele Bachmann (R-Minn.) has pledged not to contest the caucuses unless the date changes. Former Pennsylvania Sen. Rick Santorum recently canceled his planned appearances in Nevada, out of respect for Iowa, New Hampshire, and Christmas. Newt Gingrich, who is reportedly still running, has also vowed not to campaign there. Pseudo-front-runner Mitt Romney, whose success depends on winning both New Hampshire and Nevada, has publicly supported the latter state’s efforts, while behind the scenes his campaign lobbied for the controversial date change. Rick Perry, who has been endorsed by Nevada’s GOP Gov. Brian Sandoval, has stood by the state, as well. Herman Cain has said that while he’s not familiar with the specifics of the situation, he stands by Israel.*

The GOP’s attempt to set its primary calendar has turned into a highly public flame war, and efforts to settle the matter have merely made things worse. We’re about two weeks away from RNC Chairman Reince Priebus announcing that the voting order will be established through some sort of Hunger Games-style arena showdown. So what will happen? Let me unpack it for you, as best I can.

As my colleague Kate Sheppard has explained, the established primary order is pretty arbitrary. New Hampshire has held the first primary since 1952, until Iowa came along and, in the hopes of stacking the deck in favor of anti-war candidate George McGovern in 1972, moved into first. Now, it’s written into the official rules for both Democrats and Republicans: first Iowa (caucus), then New Hampshire (the first primary), then Nevada (caucus), then South Carolina (primary). If any state jumps that order—and if any of the other 46 states holds its primaries before March 5—it will be stripped of half of its delegates at the nominating convention. To appease the other 46 states, the GOP decided that in 2012, the early nominating contests would split their delegates proportionately, whereas the later ones would be winner-take-all. Iowa would cast its votes on February 6.

But that didn’t actually appease anyone. That’s because the only thing worse than losing half your state’s delegates is holding a primary that no one cares about**, and so the exodus began: Michigan went first, voting to hold its election on February 28. Then came Arizona. After initially accepting a televised debate as payment for staying put, Arizona Gov. Jan Brewer announced that her state would hold its primary on February 28—the same day as the “First in the South” South Carolina primary. Then, in early October, Florida Republicans announced that they would hold their primary on January 31—well ahead of the RNC-sanctioned starting date, and ahead of South Carolina. For their actions, Florida Republicans were treated to angry quotes like this one, from Iowa GOP chair Matt Strawn: “The arrogance shown by Florida’s elected leadership is disappointing, but not surprising.” Oof. Then it was South Carolina’s turn, and the state responded by moving its primary forward five weeks, all the way to January 21, so as not to be supplanted by Florida.

It’s like one giant chess match, except not really.

Maybe you see where this is going. Nevada, determined to maintain sole possession of third place, announced that it would hold its caucus on January 14, which is a Saturday. But Iowa is already (tentatively!) scheduled to hold its First in the Nation caucuses on January 3, so in order for New Hampshire to retain both its exclusivity and its traditional First in the Nation primary date, it would have to hold its primary on January 10. Except state law mandates that it go seven days before the next state in line (plus the short buffer on either side means that candidates would have an incentive to just skip the state and put their resources elsewhere if they don’t think they can win). And Iowa state law mandates that its own caucus come eight days before the next nomination contest. So New Hampshire is playing hardball. Secretary of State William Gardner has threatened to move his state’s primary all the way up to December 6 unless Nevada steps back. In that case, Iowa could wind up holding its caucuses just after Thanksgiving.

Gardner, meanwhile, is working with a deadline of his own: As Reid Wilson explained, Gardner has to provide absentee voters 45 days’ advance notice before the primary, and he can’t send out any absentee ballots until October 31, because the candidate filing deadline is set in stone as end-of-business on October 28. That means the earliest New Hampshire could hold a primary would be in mid-December—which, as Santorum ably noted, would ruin Christmas.

So that’s where we stand. It’s like one giant chess match, except not really. None of this really has too much to do with policy, although it has a good deal to do with candidate strategy (which is why Mitt Romney, who won Nevada in 2008, is bravely standing up for it again in 2011). And it’s a reminder of just how irrational the presidential nominating process can be, placing a premium on grudges and arbitrary traditions above all else. It also explains why Huntsman, who wasn’t likely to be asked many questions anyway, won’t be on stage tomorrow night.

Update: Iowa has officially scheduled its caucuses for January 3rd, prompting a barrage of passive-aggressive “Woo, New Years in Des Moines!” tweets from political reporters. New Hampshire’s Gardner, however, says he’s unfazed and could still very well move his primary up. The more likely scenario, though, given what I outlined above, is that New Hampshire GOPers will try to get the candidates to boycott Nevada, either officially or unofficially. To wit: Here’s a petititon asking them to do exactly that.

Update II: Hunger Games averted. Nevada caves and moves its caucus back to February 4—52 years and a day after Richie Valens, Buddy Holly, and the Big Bopper all died in a plane crash. Jon Ralston of the Las Vegas Sun breaks the news and tweets, “we are irrelevant.”

*Okay, not really; he’s boycotting too.

**There are actually worse things.