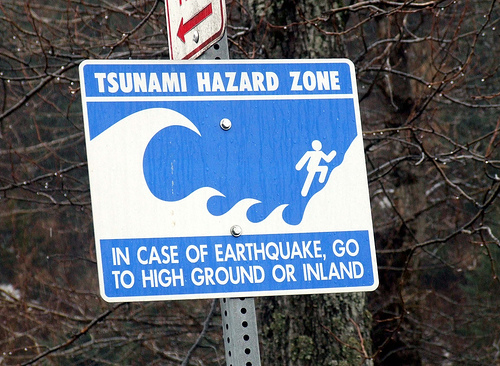 Can climate change cause or intensify earthquakes? Christopher Mims wrote about some of the science on this subject back in March, after the Japanese quake. This set the collective panties of climate skeptics a-bunching, chafed at the very notion that global warming might have some impact on plate tectonics.

This month, New Scientist takes a closer look at the subject. Their content is behind a pay wall, unfortunately, but the article concludes that there is strong evidence that melting ice and sea level rise will impact the earth’s crust, potentially causing earthquakes, tsunamis and volcanoes. There’s clear evidence that what happens at the surface of the earth can have a significant impact on even massive tectonic plates—the melting of ice after past ice ages; major erosion from monsoons over the course of millions of years; and (more recently) the construction of dams have all impacted plate movement.

The piece makes several things very clear: there has not been a significant increase in erupting volcanoes or earthquakes in the past century, and there are no scientists out there claiming that there’s a connection between global warming and things like the Japanese quake. But that doesn’t mean it won’t have an impact in the future, as Bill McGuire, a volcanologist with the Benfield Hazard Centre of the University College London argues in the piece:

There is, however, evidence that warming has triggered major landslides. And there has been very little warming so far compared with what is to come: McGuire thinks we will we see a clear effect on volcanoes and earthquakes when climate change really gets going. “Earthquakes and volcanic eruptions over a hundred years would cluster. You need a certain amount of strain to accumulate and climate change may bring forward the time that takes,” he suggests. This will mean more earthquakes and eruptions in a given period, rather than more in total, he says.

The main reason is melting ice. There is far less ice now, of course, than at the end of the last ice age. But the planet is warming much faster, so sea level may rise as fast as it ever did before. While sea level rose just 0.17 metres over the 20th century, most glaciologists expect sea level to rise around a metre by the end of the 21st century. This would add an extra tonne per cubic metre to undersea and coastal faults.

The good news is that it will probably weigh down and stabilise faults beneath the sea floor. The bad news is that it will create extra stress at the coast. Here there will be a kind of see-saw effect as the seabed is pushed down. That could add enough stress to trigger a quake on faults that straddle the coast, or run parallel to them, such as the San Andreas fault in California, the North Anatolian fault in northern Turkey, and the Alpine fault in New Zealand.