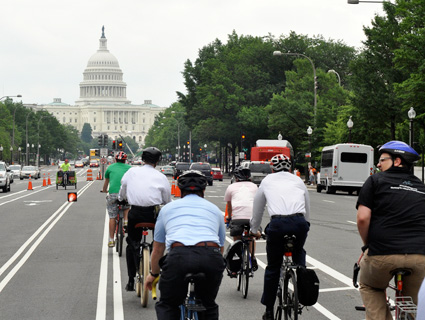 Over the past few months, as Republicans have focused their attention on cutting what they see as wasteful government spending, they’ve zeroed in on a surprising new target: bicyclists, and the programs that serve them.

The federal government spends about $40 billion a year on transportation projects. Of that, about $928 million has been devoted to what’s known as a “transportation enhancement” program, which provides funding for projects—including rails-to-trails conversions, bike lanes, and bridges—that make cycling safer, and thus more viable as a commuting option. But as Congress gears up to reauthorize the massive transportation funding bill this year, Republicans are arguing that states shouldn’t be forced to use scarce transportation funds to encourage bike commuting when bridges for cars are falling down.

“We’re doing all these things that, if we had extra money, if we were running a surplus, sure, nobody would really be complaining about it,” Sen. Tom Coburn (R-Okla.) told the Washington Post. But, Coburn added, “We can no longer have silly priorities get in the way of real needs.”

States spend only about 1 percent of all transportation funds on projects devoted to cycling or pedestrian improvements. Yet Republicans see this as an area ripe for cutting. Over the summer, House Majority Leader Eric Cantor (R-Va.) targeted DC’s nascent Capitol Bikeshare program, which provides cheap rental bikes at subway stations and other strategic locations in the Washington Metro area (including northern Virginia) to encourage bike commuting.

The program has been wildly successful and has inspired other cities to replicate it as a good way of reducing traffic congestion and air pollution (not to mention obesity). But Cantor sees only waste. As TBD reported in August, Cantor used the GOP’s “YouCut” website to highlight Capitol Bikeshare as a foolish venture ripe for elimination. Cantor also complained that bike-sharing programs were one reason that federal transportation spending was vastly exceeding the revenues brought in by the gas tax. He writes:

The Federal government distributed more than $53 billion in funding for highways and transit projects in FY 2011 from the federal highway and transit trust funds. Federal excise taxes on gasoline sales are supposed to support these programs, however spending has significantly exceeded gas tax revenues in recent years. One reason for the excess has been federal spending on projects that don’t involve highways or transit systems at all, including federally funded bike sharing programs. Bike sharing programs were part of the more than $1 billion the federal government spent on programs to promote biking and walking in 2010. Federal bike and walking programs received hundreds of millions of stimulus dollars in addition to an annually recurring funding base that now exceeds $600 million. Bike sharing programs involve installation of bike storage facilities throughout a metropolitan area, together with the purchase of publicly-owned bicycles that riders can use for free or a nominal fee as a method of transportation. Federally-funded bike sharing programs are currently operating in cities such as Washington DC, New York City, and Minneapolis.

The actual reason that gas tax revenues aren’t meeting demand for infrastructure improvements is that Congress hasn’t raised the tax since 1993, so its value has been eaten up by inflation. But no matter. Targeting bike programs to try to tame the federal budget seems to fall in line with the GOP’s belief that the whole deficit problem could be solved if we just got rid of NPR and Planned Parenthood. It’s an ideological battle rather than a viable budget solution. Bike programs are associated with liberal Democrats who believe in climate change and care about the environment, so Republicans like Cantor would like to get rid of them, even if those programs make it much easier for some of his constituents to get to work every day.