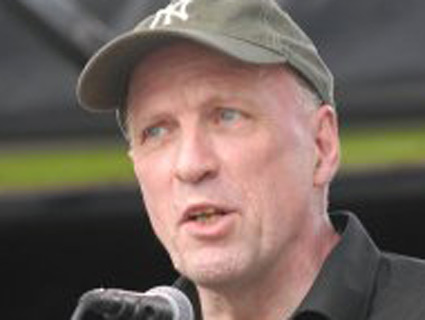 Why did the FBI detain and question a 62-year-old British environmentalist upon his arrival at New York City’s John F. Kennedy Airport? The bureau won’t say, and the activist, who was subsequently shipped back to London, never got a clear explanation.

Last Thursday, prominent British enviro John Stewart traveled to the United States to take part in a monthlong speaking tour organized by Aviation Justice Express, a US-based coalition of environmental and community-based groups. The tour was scheduled to stop in six cities across the US, where Stewart was slated to discuss his work in the United Kingdom on aviation pollution.

Stewart, who was voted the “most effective green activist” in the UK in 2008, is best known for coordinating the campaign that successfully stopped an expansion at London’s Heathrow Airport. As coordinator of the Heathrow Association for the Control of Aircraft Noise (HACAN), he worked with a wide coalition of community members, environmentalists, and politicians to block the addition of a third runway at the airport. The coalition succeeded in winning the support of the UK’s conservative Prime Minister David Cameron during his election bid in 2008; in May 2010, the coalition government officially scrapped the plan. Stewart had previously led a national coalition seeking to stop highway expansion in the 1990s. In both efforts, Stewart says, his role was working to bring together diverse stakeholders. While the groups he has collaborated with have included activists who engaged in acts of civil disobedience, they also worked with mainstream politicians and people who lived in affected neighborhoods. It was that coalition-building that made the campaigns successful.

That success led organizers to invite Stewart and another activist, Dan Glass, to speak in the US. But when Stewart landed at JFK last week, he says he was escorted off the plane by police and interviewed at length by FBI, Secret Service, and US Customs and Border Protection officials. “Six police came through the door,” Stewart says. At first, he says, “I thought nothing of it. Then I discovered it was me they had come for.”

According to the transcript of his interview with a Customs and Border Protection officer that Stewart provided to Mother Jones, the questioning focused on his environmental activism, specifically his plans for the US tour. “Essentially they were asking was I going try to stir up civil disobedience in the US in my events,” says Stewart, even though he is not known for taking part in direct actions. Several questions focused on Glass, who was slated to join him on the US tour.

Glass is a UK-based activist known for acts of civil disobedience as part of the environmental group Plane Stupid, which targets aviation emissions with colorful protests. He received international attention in July 2008 when he attempted to super-glue his hand to the jacket of then-Prime Minister Gordon Brown, an action meant to push Brown to pull his support for the Heathrow expansion. At the time, Brown was giving Glass an award for his environmental campaigning. The following year, Glass was one of nine climate campaigners arrested for occupying the tarmac at the Aberdeen, Scotland, airport in protest of a proposal to expand the airport to accommodate visitors to Donald Trump’s planned golf resort. (Glass was convicted for a “breach of peace” offense in August 2010, but he is currently appealing that decision.)

The officer also asked a number of other questions, including:

“Are you aware of any civil disobedient demonstrations that will be taking place in the United States?”

“Do you, in any way, shape [or] form, intend to harm any officials of the United States government?”

Stewart replied “no” to all of these questions.

Usually, UK citizens can apply for a visa waiver to travel to the United States, if they are tourists or traveling for business and intend to stay for 90 days or less. Stewart had applied online and been granted a waiver before departing for the US. But following his questioning, the customs official deemed Stewart “inadmissible” and denied him entry. After seven hours at JFK, he was escorted to a Heathrow-bound plane.

There, too, he was asked super-glue-related questions: What about Sarah Palin? Would he super-glue himself to her?

A few news stories last Thursday claimed that Stewart’s flight had been stopped because of threats “against President Barack Obama.” The FBI told Mother Jones that these stories were incorrect. A spokesman for the Secret Service acknowledged that they “were made aware of” the incident at JFK but deferred to Customs and Border Protection for further information.

Anthony Bucci, a CPB spokesman, said the agency could not comment on Stewart’s case, citing “privacy laws.” He pointed to a list of more than 60 reasons that could be grounds for blocking entry to the United States. Peter Donald, a spokesman for the New York field office of the FBI, confirmed that agents “interviewed the individual for a short period of time,” adding that he was “not in a position to discuss why Stewart was interviewed.”

Meanwhile, the 27-year-old Glass, who now resides in Glasgow, Scotland, has had his own problems getting to the United States. He applied for a standard visa in June, but he has yet to receive either a visa or an outright denial. Glass tells Mother Jones that when he arrived at the US embassy in Belfast for an interview with consular officials in late July, he was greeted by someone who identified himself as a CIA officer. (The name of the officer matches that of someone who works for the FBI’s Joint Terrorism Task Force, though an FBI spokesman said the he could not comment on whether this person works for the bureau).

“I’m not some kind of super-glue addict,” Glass says. He points out that no charges were filed in connection to the Brown incident, which the prime minister took in stride. “There was no stickiness of any significance,” a Brown spokesman told the BBC at the time. “This was certainly not seen as a serious protest. It was very lighthearted. This was not a serious incident.”

Apparently the US government sees things differently. Glass’ visa has been stalled since July, and Stewart only made it to the United States long enough to be questioned and sent back. “The circumstances surrounding Mr. Stewart’s situation suggest that border officials denied him entry without any legal justification,” says Trina Realmuto, a staff attorney with the National Immigration Project of the National Lawyers Guild. “It’s not the business of a democracy like the United States to censor political speech.”

Stewart says that he was advised that he could return to London and apply for a standard visa, a process that can take weeks or even months. He applied on Tuesday morning, but he wasn’t holding out too much hope based on the reception he’d received from US officials: “They weren’t very keen about me coming into the US.”