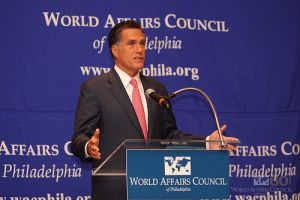 Mitt Romney came in sixth place at the Values Voter straw poll, with just 4 percent of the vote.<a href="http://mjcdn.motherjones.com/preset_16/mitt-romney-world-affairs-council-philadelphia.jpg">Mitt Romney</a>/Flickr

If Mitt Romney has ever had a “Sista Soulja moment,” it came on Saturday morning at the Values Voter Summit in Washington, when he called out a scheduled speaker, the American Family Association’s Bryan Fischer, for using “poisonous” rhetoric. Speaking to a crowd that politely acknowledged his best lines but hardly embraced him, Romney did not refer to Fischer by name (a fact that left the many attendees who do not receive email alerts from People for the American Way utterly confused) and did not specificy what exactly set him off. But there’s no question about this: Romney made absolutely certain that his comments—and the role of Mormons in the GOP coalition—would be a dominant topic at the event.

Family Research Council president Tony Perkins, the host for this weekend’s festival, came to Fischer’s defense (sort of) when I asked him about the speech. “Discourse is important,” he said. “But we don’t want anybody shutting down the debate, and that’s part of the problem with maybe more inflamed rhetoric, is there is one side that’s trying to shut down the debate. The left is trying to shut off debate and not have a discussion.” Perkins said he didn’t know enough about Fischer’s statements to comment on them.

Fischer, on the other hand, did not hold back in remarks to reporters following the speech. “I thought it was tasteless and impolite. Part of what I thought was tasteless about it was that he was allowing the New York Times, Southern Poverty Law Center, People for the American Way to dictate the content of his speech at the Values Voter Summit. And I think that shows a real lack of respect for the people here.” Fischer refrained from parroting the talking points of Dallas Pastor Robert Jeffress, who yesterday said the fact that Romney belongs to a “cult” was a strike against the ex-governor. But Fischer didn’t explicitly disagree with Jeffress, either. Mormonism is “outside the mainstream of historic Christian orthodoxy,” Fischer said. “I mean, that is not a pejorative statement, that’s just an objective historical observation.” And he repeated a line he’s used before: The problem with Mitt Romney isn’t that he’s a Mormon, it’s that he’s not Mormon enough.

Romney “almost put me to sleep! [Romney] and Perry…it was like they were on sedatives or something,” said Phil DaCosta of Georgia, decked out in a Michele Bachmann t-shirt. “The truth is not poisonous rhetoric. I think what’s most poisonous to Mitt Romney is his record. His rhetoric is attrocious. His record is probably closer to Barack Obama than it is to almost anyone on stage.” He conceded that Romney was not a true born-again Christian, but echoed Fischer’s statements: “I don’t think being Mormon excludes anybody. I think Mormons are values voters. I think what excludes Mitt Romney is his record.”

“The poor guy was standing there and he looked like a deer in the headlights, and the media were like vultures.”

Ruth Szeto, also a Bachmann supporter, said she felt the back-and-forth over Mormonism was a much needed bit of housekeeping for the conservative base. “I think they all know that with the liberal media we’ll be crucified by this, because then labels are put on us, we are labeled as non-thinking, robotic idiots that follow the Bible, as opposed to what we know we are,” she said. “I think it’s helpful to air it out and—in other words it’s sort of a rebuke to fellow Christians, and as Christians we believe you should be rebuked when you need to be rebuked.” Szeto said her denomination does consider Mormonism to be a cult, but it really didn’t matter to her so long as the endgame—conservative judges, no abortion, etc.—was one she could get behind.

“We saw Jeffress standing against the wall yesterday, and I said to him, I said, ‘uh-oh, the media is just going to bury Perry because of this,” said Bonnie Borris from Los Angeles, a Perry supporter. “The poor guy was standing there and he looked like a deer in the headlights, and the media were like vultures. I felt sorry for him, because he was just a sweet man trying desperately… to explain [his views], and he had no clue that they were just going to chew him up and spit it out.” Borris, who supported Romney in ’08, speculated that Jeffress’s comments might help explain Perry’s poor showing (he finished in a tie for fourth, with half as many votes as Rick Santorum.”)

How ubiquitous was the subject of Romney’s faith at the gathering? Even Glenn Beck, the final speaker of the afternoon and a member of the LDS church, felt obliged to broach the subject. In his address, Beck said of the speakers who had discussed Mormonism, “I celebrate their right to say those things in America.” Perhaps recognizing the divisiveness of the issue, he didn’t pass judgment, and instead sought to build a bridge: “I am a proud member of the Church of Jesus Christ.” Left unsaid? The last four words: “of Latter Day Saints.”

Because Romney was never a serious candidate to win today’s straw poll (congratulations, Ron Paul!), there’s a chance he wasn’t really addressing the Values Voter Summit at all. He was, as Fischer suggests, making a pitch to the Fourth Estate—and the millions of Mormon voters who, last we checked, tend to turn out for Republican primaries. Message received.