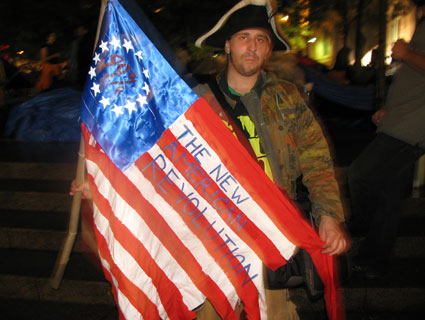 As the Occupy Wall Street movement has gained momentum in recent weeks, the protesters have been likened to another band of fed-up activists who took the political world by storm—tea partiers. Conservative activists haven’t taken kindly to the comparison, complaining bitterly about being lumped together with grubby anarchists peeing in buckets in New York’s Zuccotti Park. But perhaps irate tea partiers should actually be thanking the OWS protesters. After all, the movement may help to reinvigorate the tea party, which has lost considerable steam after the midterm elections.

“Tea party rallies have always been safe and clean,” the group wrote. “Unlike in New York, we can find no reports of tea partiers being arrested, individually or en masse, at the thousands of tea parties across the country with millions of attendees that have taken place for years now. They are not lawbreakers, they don’t hate the police, they don’t even litter. A quick glance at the TV reveals the sharp contrast posed by the Wall Street occupiers.” The commentary quickly went viral.

Brendan Steinhauser, the federal and state campaigns director at FreedomWorks, recently made similar complaints to Newsmax. When the tea party movement exploded in 2009, he said, “No one was assaulted, no one trashed the place, no one relieved themselves on cop cars because we respect private property rights and we respect public property rights…They’re fighting police in Boston. I doubt they have permits, I doubt they treat the police well. Whereas we went and got permits, we obeyed the police, we thanked the police, we picked up our trash.”

But for all the griping about being compared to OWS ruffians, the tea partiers seem pleased to be in demand again. Until the protests began, the tea party was keeping a pretty low profile. Many of their recent rallies in DC have fizzled, including one sponsored by Tea Party Express in late July that was designed to focus attention on the debt ceiling fight. There were more reporters than activists present. Mark Meckler, Tea Party Patriots’ coordinator, who’d dropped out of the limelight, has resurfaced again with a vengeance on Fox News and elsewhere to denounce OWS. “These folks are actually breaking the law, and they become rock stars,” Meckler complained to Fox host Neil Cavuto earlier this month.

The OWS protests have given the tea partiers a rare media opportunity to position themselves as the grown-ups in this fractious political climate (if not the geezers that they tend to be). It’s a remarkable pivot, given that over the past two years tea partiers have, among other things: promoted Islamophobia; made racist comments about Obama; questioned the president’s birth certificate; and brought the economy to the brink of collapse by pressing to shut down the federal government over the national debt. They also occasionally showed up at rallies looking like war reenactors, with people dressing up in tricorn hats decorated with tea bags. But now, tea partiers have seized on the OWS protests to frame their own activists as sensible, God-fearing Americans who know how to pick up their trash.

The renewed attention arrives at a good time for a movement whose visibility seems to be waning as activists disappear into the generic Republican establishment. The tea party’s most notable initiative in recent months has been one launched by Tea Party Patriots to push its version of constitutional studies on the nation’s public schools. The campaign was a flop, as many schools resisted bringing the tea party’s religious-tinged curriculum into the classrooms.

Perhaps the biggest sign of the tea party’s diminishing clout is the current race for the GOP presidential nomination, where Rep. Michele Bachmann (R-Minn.), who chairs the House Tea Party Caucus, has all but disappeared in the polls. The race appears like it’s shaping up to be more of a match up between distinctly non-tea party candidate Mitt Romney and Texas Gov. Rick Perry, who is also unpopular among many tea partiers because of his more liberal views on immigration.

Given all that, OWS seems like the best thing that’s happened to the tea party movement in a long time. Tea partiers can only hope the occupation lasts a while longer, generating more trash—and trash talk.