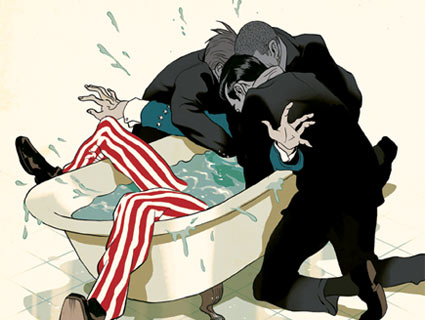 Among the many ritual ablutions a Republican presidential contender must perform is the signing of Grover Norquist’s “Taxpayer Protection Pledge,” a document the length and subtlety of a bumper sticker that commits politicians to oppose “any and all efforts to increase taxes.” To date, all the GOP hopefuls, save Jon Huntsman, have signed on, as have 238 House members (99 percent of the GOP caucus), 41 senators, and more than 1,200 state legislators (PDF).

Also read: Kevin Drum on the six myths that must die for our economy to live and the charts that back him up.

Norquist, a professional conservative and Washington salonista, drew up the pledge in 1986 at the behest of Ronald Reagan (who had signed a major federal tax increase a few years earlier, but never mind). It was part of the Republicans’ nascent “starve the beast” campaign, which postulated that since cutting public services would always be unpopular, the way to shrink the government was to give it little more than hardtack. The movement erupted into full bloom in 2001, when Congress passed the Bush tax cut package; at the time, Norquist crowed: “I don’t want to abolish government. I simply want to reduce it to the size where I can drag it into the bathroom and drown it in the bathtub.”

Leaving aside the metaphor’s casual brutality (what can you really drown in the tub? A puppy? A child?), shrinking government wasn’t on the agenda. Not really. Wars of choice, Medicare Part D—George W. Bush cranked up federal spending, and Norquist and his pledges didn’t kick.

But there was a time bomb built into the 2001 tax cuts. The package was estimated to put the nation $700 billion in the red (PDF), putting it at odds with congressional “pay as you go” legislation under which lawmakers had to offset bills that stood to increase the deficit for more than 10 years. But—voilà!—Congress set the tax cuts to expire in exactly 10 years, de facto taking their cost off the books. It was the equivalent of telling your spouse that the two of you will balance your checkbook every month, except for the Maserati that you’re floating on the Visa.

Back to the bathtub: Republicans set the nation’s budget on track to flip from surplus to deficit by passing a giant tax cut and hiding the fiscal implications. Then, in 2011—after forcing an extension of that same tax cut—Republicans were shocked, shocked to discover the ballooning deficit and demanded immediate, drastic spending reductions.

“I don’t want to abolish government. I simply want to reduce it to the size where I can drag it into the bathroom and drown it in the bathtub.”—GOP mega-strategist Grover Norquist

And the same charade has been playing out in state capitals, where governors like Wisconsin’s Scott Walker and Ohio’s John Kasich slashed taxes, created deficits, and then found it necessary to decimate public services.

Now, you may generally endorse government spending, or you may not. But it is the only kind of spending that can be pumped into the economy when business investment dries up. And it’s also what keeps paychecks coming to the 20 million Americans who work for federal, state, and local governments, the 1.4 million active-duty military personnel, the 55 million on Social Security, and last but certainly not least the 300,000-plus businesses that depend in whole or in part on government contracts. So even if your goal is to drown the government in the tub, you might just want to consider delaying the deed until the economy gets out of its slump.

We learned that lesson back in 1937 (see “Rich People Create Jobs! And Five Other Myths That Must Die for our Economy to Live“), but evidently we’re eager to learn it again. For the first four months of this year, it looked as if the economy might slowly, wheezingly be picking up steam. Job creation in the private sector was finally creeping up toward 180,000 a month, the level needed (because of population growth) to keep the unemployment rate flat. But those anemic improvements were dragged under as governments (mostly state and local) slashed jobs at the rate of about 23,000 a month, and with austerity budgets working their way through statehouses from Madison to Columbus to Tallahassee, the cuts were about to get worse. Add the insanity of holding the debt ceiling hostage, and the outcome was foretold: A tepid recovery tipped toward a double-dip recession.

So do Republicans truly want to end deficits? No, or they would have paid for the 2001 tax cuts. Do they prioritize revitalizing the economy? Apparently not, or they wouldn’t be kicking it as it struggles to get up. It’s hard to believe that some of our political leaders would be willing to wreak havoc with Americans’ lives and businesses, yet every day that conclusion becomes harder to escape. 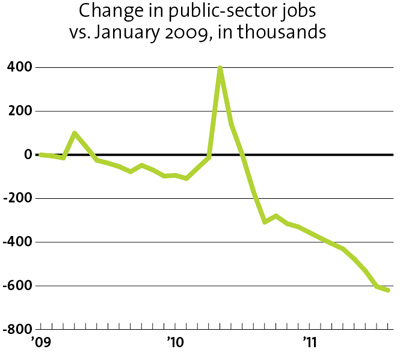 But why? That, too, is not that hard to figure. GOP leaders are going with ex-White House chief of staff Rahm Emanuel’s advice to “never let a serious crisis go to waste.” Much as the Bush administration seized on 9/11 to pursue the long-standing project of taking out Saddam Hussein, so today’s GOP is seizing on the deficit “crisis” to pursue the long-standing project of reducing government’s ambition. Americans, as Don Rumsfeld and Dick Cheney understood, might not agree that regime change in Iraq was in the national interest, but fighting the people who brought down the towers, that you could sell, facts be damned. And ditto: Americans might not want to sell off Teddy’s national parks, let Ike’s highways fall apart, and kill Nixon’s EPA. But if the cuts are sold as a way to stave off national bankruptcy—at a time when we’ve all been forced to grapple with our personal debt—that might play. Let the economists yammer about how the deficit is neither dangerous nor out of hand: We’ve got overpaid bureaucrats sucking the lifeblood out of our economy! Bring on the exterminators!

The beauty of this strategy is that it creates the atmosphere for its own success—call it political terraforming. Say you’re trying to get a building permit at your local zoning office and the budget has been cut 20, 40, even 50 percent. The lone remaining clerk won’t process your paperwork on time, your contractor won’t get paid, and you might just give up on your project; you need a drink, but you can’t get one because the restaurant down the block is still waiting for its liquor permit. Now you’re mad at the government and the economy suffers, making you madder.

Public transit cutting routes and upping fares? Parks shuttering Little League fields? Bridges going unmaintained until they fall into rivers? Firefighters letting homes burn because the owner hasn’t paid a $75 fee? Cops watching a man drown because they can no longer afford water-rescue training? (Those last two? Really happened.) Do this long enough, and pretty soon the snake starts eating its own tail: We underfund public services, therefore public services don’t work, therefore we underfund them. Back when California voters kicked off the whole starve-the-beast thing with the Prop 13 anti-tax initiative in 1978, the state ranked in the top tier nationally for per-pupil spending; today, it’s No. 43. Today many who can afford to pull their kids out of the system do exactly that, which further undermines support for it, whereupon…snake, meet tail. And is it a coincidence that a less educated population is less equipped to call BS when politicians deride Social Security as a Ponzi scheme—or for that matter promise us a lockbox?

Cops watching a man drown because they can no longer afford water-rescue training? Actually happening.

And the cutting spree shows no signs of abating, in part because few on either side of the aisle—or, it must be said, in the media—seem to have the spine to explain basic math. As MoJo‘s Kevin Drum has pointed out, in order to reach the spending-reduction levels proposed by allegedly sane GOP candidates like Mitt Romney, you’d have to zero out nearly everything the federal government does except for defense, Medicare, and Social Security. That won’t happen—but even cutting a fraction of that would have devastating effects. A cut equivalent to 1 percent of GDP, or about $150 billion, would, according to a recent study by the International Monetary Fund, result in 750,000 more people on the streets. And the private sector, as we’ve seen in the past 18 months, is not about to make up for that even though it’s sitting on billions in profits.

So the next time you seethe as you wait in line at the permit office, or pace at the bus stop, or lose an axle to a pothole, think of the Grover Norquist acolytes who, their government-paid health care and pensions secure, jet around the country on the taxpayers’ dime and chill in the CNN green room between votes to funnel government giveaways to their corporate cronies—while the poor schmuck in front of you is one budget cut away from losing his job. Who’s the real problem?