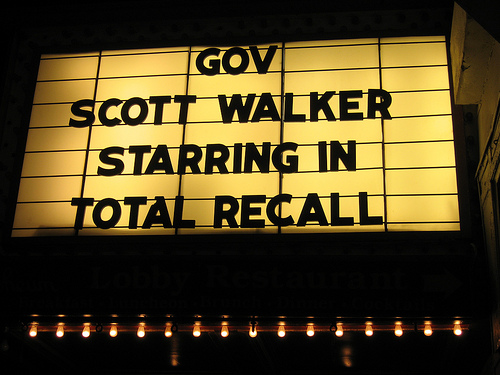 United Wisconsin, a political action committee formed by grassroots organizers to recall Walker and Lt. Gov. Rebecca Kleefisch, says it will file papers on November 15 with Wisconsin’s Government Accountability Board to begin the recall effort. Organizers will have 60 days to collect 540,208 signatures to trigger a recall election, but they hope to gather 700,000—enough to withstand legal challenges by their opponents. In its release announcing the recall effort, United Wisconsin says it has already gathered more than 200,000 pledges from Wisconsinites saying they’d sign a Walker recall petition. The release describes the recall effort as a collaboration between United Wisconsin and “numerous other grassroots groups, political leaders of all stripes, seniors, educators, veterans, and religious leaders of all faiths.”

The idea for a Walker recall grew out of the massive protests that engulfed Madison, the state capital, this winter and spring in response to Walker’s anti-union budget repair bill. The bill curbed collective bargaining rights for most public-sector unions in Wisconsin, while making it harder for those unions to collect member dues and forcing them to re-certify each year. The overall effect has been to weaken organized labor’s influence in Wisconsin, a traditionally pro-union state where the first public-sector unions were formed. More than 100,000 people protested Walker’s bill and the Republicans in the Wisconsin legislature who supported it, occupying the rotunda of the state Capitol building and filling the streets surrounding the Capitol, an uprising that captured the nation’s attention for weeks. Walker ultimately prevailed, signing the bill into law in March; after surviving several legal challenges, the bill went into effect in June.

A Walker recall promises a political battle just as divisive as the one that unfolded this summer in Wisconsin. Targeted for their actions during the bitter debate over Walker’s repair bill, three Democrats and six Republicans in the Wisconsin state Senate faced recall challenges, with Democrats needing a net gain of three seats to flip the Senate majority. In the end, though, Democrats netted only two seats, and both sides claimed victory: GOPers for clinging to their majority, and Democrats for their two wins. Nonetheless, the failure to win back the majority appeared to drain some of the Democrats’ momentum as they eyed the biggest recall of them all: Scott Walker.

Now, Wisconsin progressives and Democrats must convince their supporters to gear up for one more recall battle in 2011. That’s a steep challenge: the memory of this summer’s spate of toxic ads and constant mud-slinging is no doubt still fresh in the minds of many. Throughout the summer, polls showed Wisconsinites split on the idea of challenging Walker, though a recent Democratic Party of Wisconsin poll found that independents supported recalling Walker, 52 percent to 36 percent. Is there enough anger left at Walker’s policies to mobilize against him? Or will that effort, like this summer’s elections, fall just short?

In a conference call with reporters, United Wisconsin officials stressed that the time was right to recall Walker. “I think the momentum is just as strong, if not stronger,” said United Wisconsin co-chair Kevin Straka. Straka and co-chair Ryan Lawler were, however, short on details about their get-out-the-vote strategy or messaging plans, a sign of the grassroots nature of this recall effort. The Democratic Party of Wisconsin will help sign up volunteers and raise money for the recall, but so far the campaign itself is looking like a truly bottom-up operation.