“I won a student travel writing contest in 1991,” he told me. “I wrote about being mugged in the Mission District actually, which happened around then.” A book deal followed, and with the roughly $5,000 advance, a 22-year-old Kuper embarked on a nine-month, 22-country trek to chronicle soccer’s geopolitical import. On his travels, he encountered, among other things, a Ukrainian club that exported nuclear missile parts and an East Berliner who’d been harassed for decades by the Stasi for supporting a West Berlin team. Since Soccer Against the Enemy‘s release, hundreds of kindred books have flooded the market, all aiming to deploy the planet’s most popular sport to understand assorted phenomena.

Today, Kuper is more circumspect about soccer’s power to, as Franklin Foer’s 2004 bestseller famously put it, “explain the world.” “I think when you start writing about soccer and politics, you’re quite missionary about it,” he said. “Over time, I’ve begun to see soccer as an illumination—a lens—and not as a hammer. It doesn’t change things. Almost never.” It’s not that soccer and politics don’t mix. Kuper pointed to the coalition of hard-core supporters from Cairo’s two fiercest rivals that was instrumental in bringing down Hosni Mubarak. But whereas an event like the World Cup was once a hub of nationalistic zeal, fans now support their national teams in a “much more jokey, relaxed manner than they did even in ’80s.”

So what does he make of Foer’s audaciously titled tome? “I haven’t read the whole book,” Kuper said, adding that he doesn’t generally read soccer books for fun. “I think he’s got some really nice stories and some really nice times and places. I don’t think it adds up to a theory of how the world works.” In fact, last year, Kuper penned an essay for Foreign Policy called “Soccer Explains Nothing.” (He’s quick to point out that he didn’t write the title—and that he’s contributing to a collection Foer’s putting together on Jews in sport.) Even so, Kuper’s growing skepticism of a soccer-centric worldview is clear. As he wrote in Foreign Policy, “It seems that the main geopolitical significance of the World Cup now lies in the logistics of organizing it.” 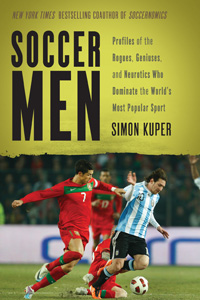 Kuper’s last two books reflect this shift in thinking. Last year, he coauthored (with economist Stefan Szymanski) the Moneyball-inspired Soccernomics, which employs statistics to answer questions like, “Why does England always lose?” Soccer Men, which hit bookshelves last week, pulls together 15 years’ worth of Kuper’s profiles of players and coaches. They are his attempt to bring the Zinedine Zidanes and Lionel Messis of the world back down to earth by asking what they’d be like as ordinary people.

Kuper doubles down on his depiction of the vacuous superstar in the profiles that follow. He refers to Pelé as a “smiling doll who travels the world shaking hands for global corporations.” And he gets a special kick out of Lothar Matthäus, whom American soccer fans might recall as the whiny German star who showed up in the States in 2000 barely long enough to collect his six-figure salary from the then-New York/New Jersey MetroStars before jetting off to St. Tropez to “rehabilitate” his injured back. Writes Kuper, “At a very young age, [Matthäus] developed a gift for articulating dumb and irritating thoughts.” The odd player earns Kuper’s full-fledged admiration, but those examples are few and far between.

Whether the overall portrait Kuper paints of the professional soccer player is a fair one—or whether the profiles reflect a writer jaded after almost 20 years covering the sport (he confesses to hoping to write less about soccer moving forward)—is hard to assess. Either way, Kuper’s effortless wit and keen sense of irony make Soccer Men well worth the read. Still, the romantics out there might find themselves pining for a little less cynicism from the author who, back in 1994, wrote this: “When a game matters to billions of people it ceases to be just a game. Football is never just football.” After all, what’s the harm in explaining the world through soccer, even if it is just for fun?